The next morning I checked out of my hotel and flew to San Francisco. I had rented a car, but the plans were still a bit vague. I had been in email conversation with Gene X, a well-known photographer, who urged me to visit Free Gold Watch. 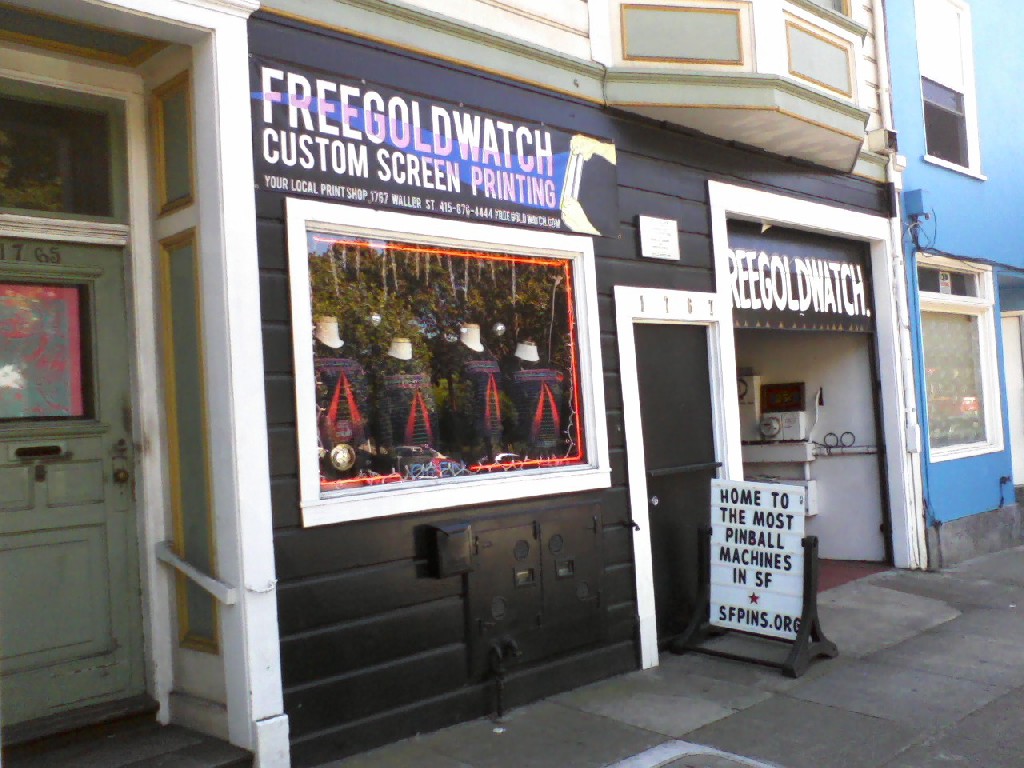 I met Gene at his office and after some catching up we drove to FGW. This is a T-shirt print shop with some 30+ pinball machines. I met owner Matt and his wife, who were both very kind. I got a small tour and showed them the PINBALL book by Santiago Ciuffo. They loved it.

Matt had already bought the previous Issues of Pinball Magazine and asked me to autograph his copy of Issue 2. I got to play some pinball (Police Force made sense since it’s a game Python worked on and I can’t play it that often in The Netherlands) and admired the custom artwork on an Old Chicago game in their place.

I had sort of dinner plans out of town and once these were confirmed I drove to Mill Valley to meet with Suzanne Ciani. Suzanne is a five-time Grammy nominee electronic music pioneer who’s voice appeared in Bally’s Xenon game from the early ‘80s. I met Suzanne at Pinball Expo in 2013 and her seminars were so entertaining that I was interested in talking to her some more. Obviously she is not a pinball enthusiast, but since I used to produce music as well, and occasionally still do, there was plenty of stuff to discuss. 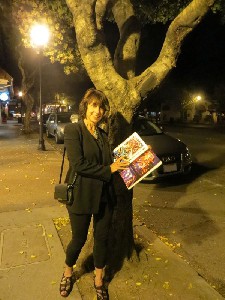 Suzanne took me to this very nice Italian restaurant where we had dinner. It was great fun and basically there was not enough time to discuss everything. After dinner, before saying goodbye, she posed with Santiago Ciuffo’s PINBALL book as the Xenon game is in there. Another great night!

Thursday I had planned to visit Playland-not-at-the-beach, as they have quite a few pinball machines in there, but it turned out they are only open during the weekend. So instead I decided to drive to the Musee Mechanique in San Francisco.

Heavy traffic prior to the bridge going in to San Francisco made me figure it made more sense to drive to Alameda instead, as that was nearby. I called Michael Schiess, the founder of the Pacific Pinball Museum, and it turned out he could see me for lunch. I met Michael at his place, which is a pretty cool house. 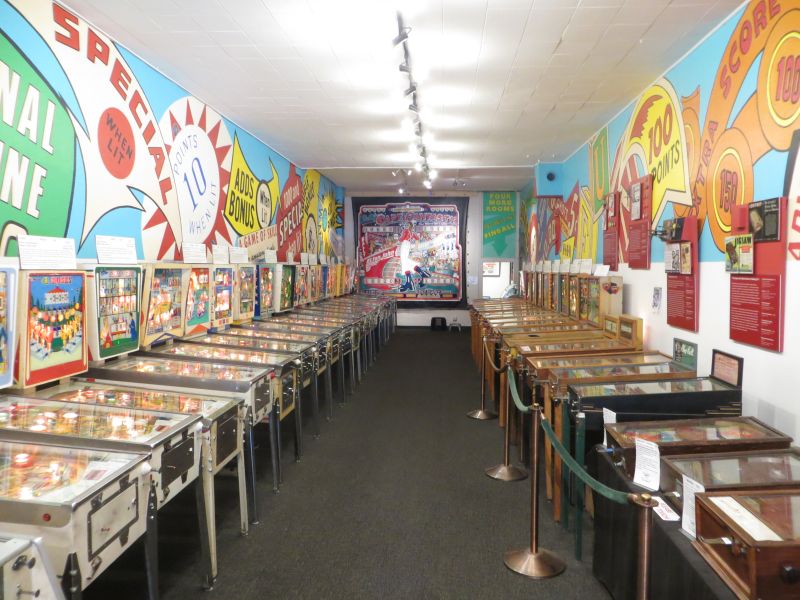 After a quick tour we drove to the Pacific Pinball Museum where a group of kids was having a private tour. Very clever to take a group of kids to such a place in the holidays. Who wouldn’t like to play pinball?

I took some photos before we went out for lunch, where we met with Mark Mandeltort from Marco Specialties. He was in town with his wife, visiting her sister. After lunch the whole group went back to the museum. More photos.

Michael then showed us around town, including the PPM warehouse and Carnegie Hall, the potential future location for the museum. This location has indeed great potential. It would be great if the PPM could raise the funds to do reconstruction work and move their museum there. 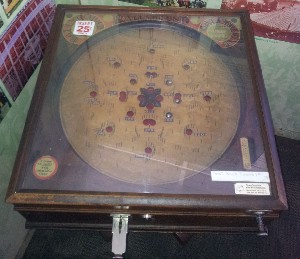 Friday was a traveling day as I planned to drive to Santa Clara for the California Extreme show. I figured I could visit Musee Mechanique on Fisherman’s Wharf after all. This is an interesting location. Being on a very touristic end of town the place was pretty crowded. I spotted some very interesting mechanical games, like the Bally Round from 1932, pictured on the right. Highly recommended if you’re visiting the Bay Area. The only downside is the very expensive parking near Fisherman’s Wharf.

Then I drove up to Santa Clara. Friday afternoon traffic allowed me to see some more of the city as well.

Around 6:00 PM I arrived at the Hyatt, the location of California Extreme. Game setup was still in progress and I was impressed by the huge size of the show floor and the number of games. Probably 200+ pinball machines and a similar number in videogames. Haven’t seen anything like it before. Took some pics and played in the classics tournament. Met some familiar faces and got to catch up with them, which is always fun to do. Left after midnight to finally get something to eat. 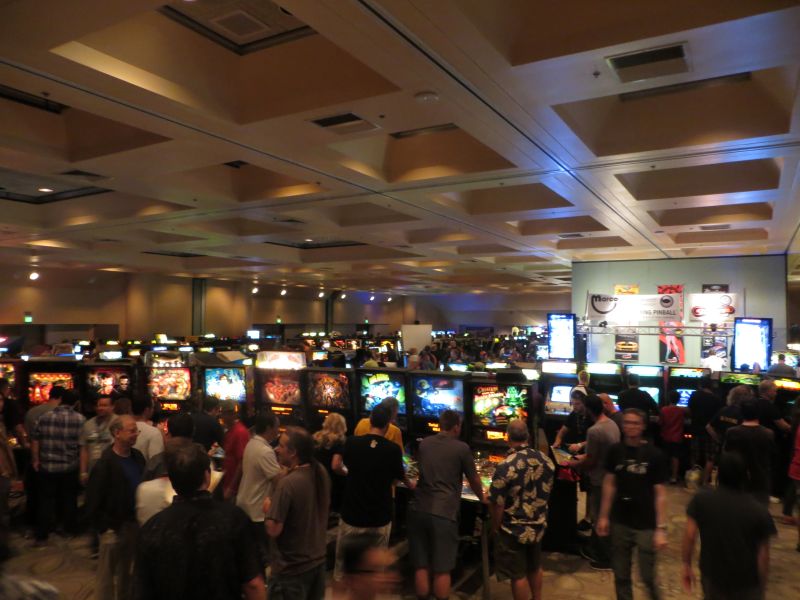 Left view from the main entrance. On the right was a similar sized half.

The next morning I showed up around 11:00 and found the place packed! Busiest show I’ve been to so far. Michelle from the organization was very helpful. Eugene Jarvis (former videogame programmer, now owner of Raw Thrills) did a great seminar with lots of jokes and funny comments.

The pinball tournament area was very busy. I noticed one of the machines in the Classics was replaced, but the queue to qualify on it was so long that I didn’t bother. I took lots of photos of pinball machines and played some games I didn’t know, or hadn’t played in a while.

One of them was Hyperball. I remember playing this game in an arcade as a kid, but since then I hadn’t come across any. I don’t think I got the hang of it yet, but it was fun playing some games on it.

I also met film maker Anna Newman. We had emailed before and it was very nice to see her in person. She was hosting a seminar on Sunday with Wade Krause. I was not able to attend, but will watch it when it becomes available on YouTube.

At the show the Pacific Pinball Museum had a stand in which they were selling the new PINBALL book by Santiago Ciuffo, as well as some of the very few last copies of Pinball Magazine No. 1. Unfortunately it turned out that the promotional posters of the book got lost during transport, so not many people knew about it. In an attempt to create more awareness for the book I sacrificed my own sample copy. I tore out all the pages and separated them. After that I hung these pages throughout the corridors, each with a handwritten post-it attached to it mentioning the book being available at the Pacific Pinball Museum stand.

On Sunday the organization kindly squeezed me into the seminar program with a 15-minute slot at noon. I was right after video game designer Warren Davis, who talked about the development of Us vs Them, a video game that he did together with pinball designer Dennis Nordman.

In Pinball Magazine No. 2, which features a cover story on the career of Dennis Nordman, the game is mentioned briefly. The game used a laserdisc platform, which turned out to be so unreliable that the game never made it into full production. Or it did, but was no success. This was however a very interesting seminar.

My own seminar went pretty OK. I had prepared a small presentation about how Pinball Magazine came to be, the past two Issues, the upcoming third Issue and Santiago Ciuffo’s PINBALL book. Being an impromptu seminar, not listed in the program, there were not that many people attending, but the majority of those that did bought a book or copy of Pinball Magazine No. 1 afterwards. Percentage-wise a very good score 🙂

Following the seminar the organization allowed me to set up a small table in the corridor near the exit where I could sell the PINBALL book. That certainly helped to sell some copies. In the afternoon a raffle was held, for which I donated a copy of the book. This raffle was held in the corridor and the winning numbers were announced through a megaphone. During the raffle the book got a nice promo. After the raffle I borrowed this megaphone and used it for the rest of the day to inform people about the “New pinball book, special offer, right over here.”

The various pages from the book spread throughout the corridor like a small exhibition, the seminar and the use of the megaphone resulted in far more sales than on the first day of the show. When cleaning up after the show it turned out that many of the pages from the book were taken by people, which I can only see as an indication that they must like the photos by Santiago Ciuffo. Hopefully they will order the book as well.

The great thing about shows like these are the people you run into. Sunday afternoon I ended up talking to Tanio Klyce, a senior software programmer at Stern Pinball and Kelly Masurowski, a stop motion graphics programmer. Kelly has done some dot animations for Stern and was actually very close to being hired by Jersey Jack Pinball, as he had indicated he wanted to work badly on the third game JJP will be manufacturing. For some reason that didn’t work out (yet), but who knows in the future? It was great to talk pinball with these guys. One of the highlights of the show. 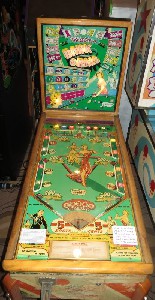 My biggest highlight of the show, in terms of games played: a 1950 Gottlieb Bank-a-Ball. In terms of playfield design they don’t come any simpler than this: 2 2-inch flippers with a huge gap in between them, 2 slingshots on each outer side of the flippers, 6 kickout holes and 15 standup targets on the outside and top of the playfield to hit. No outlanes, or inlanes, no pop bumpers, no ramps, no other stuff. Just that.

The playfield represents a pool table layout. The kickout holes are located where you normally would find the pocket holes on a pool table. In between these ‘pockets’ are rubbers with standup switches that represent each of the 15 pool balls. The ball is launched from between the flippers and can be aimed at a varying angle to the top.

You get 5 balls and the objective is simple: sink all 15 balls by hitting each standup target once. I gave it a shot. Maybe I got 10 balls on my first attempt. I can do better than that. Another attempt. Guess what: I kept trying. I kept coming back to that game. Twice I sunk 14 balls, but 15 seemed impossible.

This is what made pinball profitable. An objective that is simple to understand, but hard to achieve. Every time you feel you come close, so you keep trying. This game must have earned fortunes for operators back then. What a blast. Now I’m looking for one.

For those considering attending California Extreme next year, I recommend this show seriously if you want to play lots of fun games, see a seminar or two and hang out with great people.