Pinball Magazine editor Jonathan Joosten has just got home from a pinball-related round trip that took him to Las Vegas, San Francisco / Bay Area and Orange County. Pinball Magazine is not a publication to publish travel reports, as the Pinball Magazine website is a better platform for such reports. Below you’ll find a summary of Jonathan’s findings.

The reason for this round trip was to attend California Extreme in Santa Clara, CA, while incorporating as many interviews as possible for Pinball Magazine No. 3.

First stop was Chicago. When booking this trip I had the choice to fly via Houston with a two hour transfer, or Chicago with a seven hour one. I figured I could meet with some people in these seven hours, so I picked Chicago.

It didn’t help that it was the weekend of the 4th of July, but I was able to meet with John Balogh. This name may not be familiar to many people, although that may change after Pinball Magazine No. 3.

John is a sculptor, and was brought in to pinball by Python Anghelo.  John sculpted toys for many Bally/Williams games, such as Party Zone (Captain B. Zarr head), Cirqus Voltaire (Ringmaster), Pinball Circus (the elephant, the spinning girl and more) and other games. John was very close to Python in the months prior to his death in April of this year.

As Python wanted to have John featured in Issue 3 as one of his unsung heroes, we had already met in January 2013. However, with Python also present John didn’t get to talk much. So this was a good opportunity to talk to John about how it was for him to work with Python. This interview will be published in the upcoming Pinball Magazine No. 3.

After heading back to the airport my transfer flight to Las Vegas was delayed and eventually cancelled. First there was a technical issue with one of the engines. By the time they had fixed it the crew was working overtime, which apparently was a huge problem. A new crew was brought in, but then the flight was cancelled after all. So I got to spend the night in Chicago instead of Vegas. 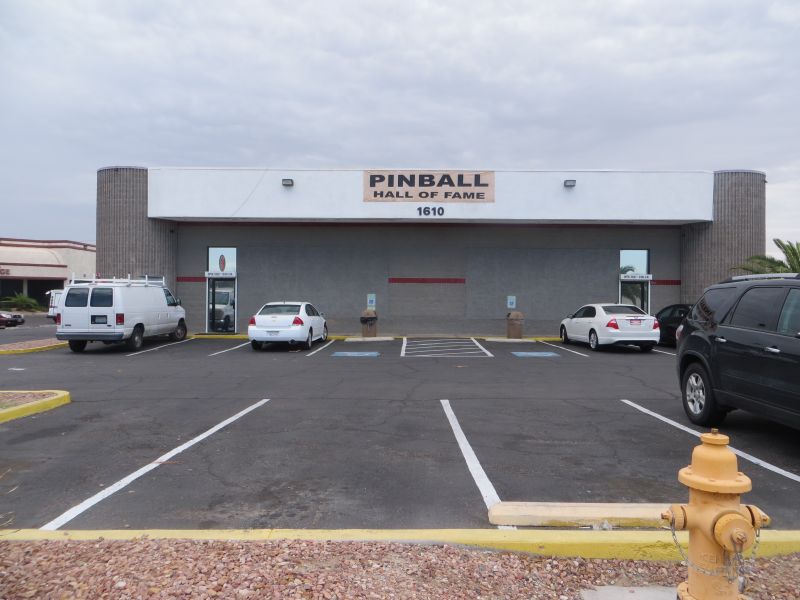 The next morning I did fly to Vegas and checked into my hotel right away. Then I headed to the Pinball Hall of Fame. About 200 pinball machines in a single location, including the only publicly operated prototype of Pinball Circus. 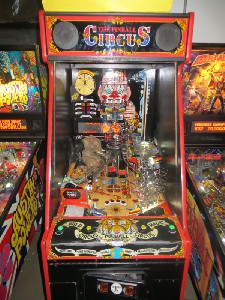 I got to play the game and did an interview with PHOF founder Tim Arnold. Interestingly enough I also got to play many of the electro-mechanical Gottlieb games. Being from The Netherlands I am more familiar with EM games by Bally and Williams, but what fun it was to ‘discover’ these older Gottlieb games. It brought me a whole new sense of appreciation and understanding for these games. This may actually come in handy as I’m still hoping to interview Gottlieb designer Wayne Neyens one day for a future Issue of Pinball Magazine.

In terms of games set up, with 200+ games the PHOF has something to offer for everyone. Woodrails, lots of EMs, some solid state games and a whole row of recent dotmatrix games, including the latest Sterns and JJP’s Wizard of Oz. Amongst these games are quite a few remarkable ones. Pinball Circus comes to  mind, but also Orbitor 1, Q*Bert’s Quest, Goin’ Nuts, the remake of King of Diamonds, Hi-Score Pool and Impacto come to mind. Besides pinball machines PHOF also has some classic videogames and other non-pinball arcade games, making it more interesting for families and groups to visit.

Interestingly enough PHOF had quite a few games set up that are featured in Santiago Ciuffo’s PINBALL book, which Pinball Magazine recently published. I had only seen many of these games in the book, but never played them before. This was a great opportunity to play them as well. The simplicity of these games, especially the older Gottlieb ones, really struck me. In most cases the goal is very simple: there are ten, twelve or fifteen inserts that can be lit by hitting a specific target or rolling through a specific lane. The player has to light them all for a Special (replay). Sounds simple, but turns out to be pretty hard.

The result: you (or at least I) keep trying because you think, “I can do this”. Next thing you know is that you spent $ 20.00 in quarters  in one afternoon. Great fun! 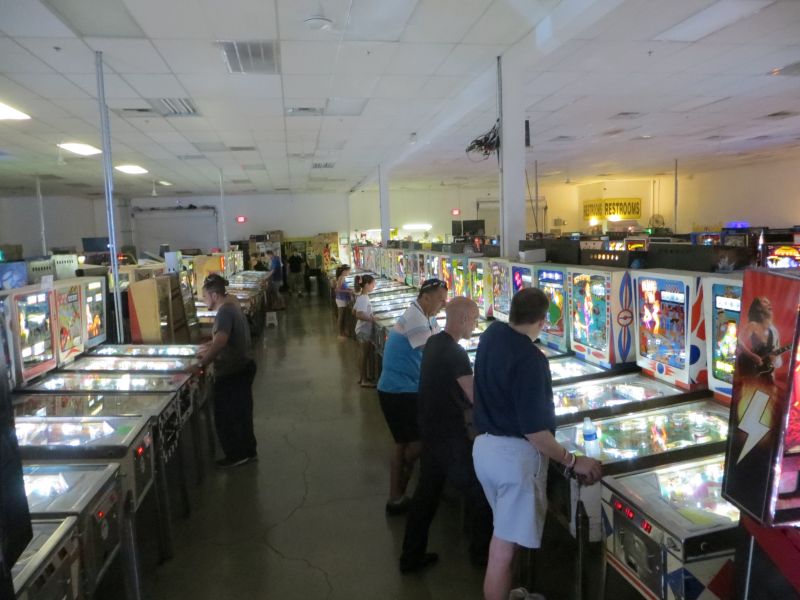 I was surprised to see how busy the PHOF turned out to be. I was expecting maybe 4 or 5 people attending, but most of the time 30 to 40 people were playing pinball. According to Tim this was a quiet day. At weekends it’s a lot busier.

While most of the games that I played were in decent condition, I couldn’t help but notice that the place has more potential. It may be just little things, but aligning the games would immediately make it look a bit better. I understand there is already plenty of stuff to do, but still.

And most games have a piece of paper with interesting notes on them. That’s great, but they are all hand written and often faded. A printed version would simply look better. 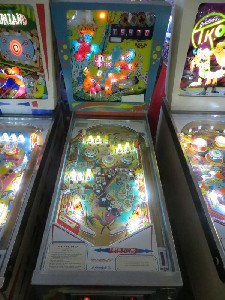 And most games are also equipped with ‘cool white’ LEDs, instead of regular pinball bulbs. From a maintenance point of view I understand the choice for LEDs, but for most of these older games a ‘warm white’ LED would look a lot better. Owner Tim Arnold couldn’t care less however. He expresses his opinion pretty directly: “If you don’t like it, don’t come here.”

During my visit I met fellow Pinsider BigB as well. He was in town with his wife and another couple and they showed me around for a bit, which was great. We drove The Strip by car at night and went for a bite after that. Very nice.

The next day I had planned to buy a GPS. While originally planning to buy a new one, a security guy on the bus suggested I could get a better deal at some pawnshop. Interesting suggestion.

One of these pawnshop TV shows is from Vegas, so I figured I could take a look there. That meant traveling uptown, which was interesting. I got to see The Strip by daylight and discovered that uptown Vegas is quite different (poorer) than downtown. On my way I got off the bus at the Riviera, as the PHOF has some pinball machines routed there as well. My first time seeing a Spanish Eyes and Granada, two particular Williams EM games.

The famous pawnshop from the TV was actually quite disappointing. Aside from being packed with tourists they didn’t sell any electronics. Just the guns, jewelry and other stuff that you see come by on the TV show. Plus tons of their own merchandise, which you don’t see on TV at all. On my way there however I had spotted another pawnshop and on my way back I went there. The daypass cards from the Vegas busses come in handy, as you hop on and off as you please.

Luckily for me the pawnshop had a discounted TomTom on sale, which saved me about $ 100.00 compared to buying a new one. This GPS turned out to be vital during the coming days when I was driving around in a rental car. I can’t imagine getting around without it.

On my way back I did some sightseeing on The Strip. M&M World was kind of fun to see. Hardrock Café had some interesting guitars on the walls. I got some silly souvenirs as well. After dropping that stuff in my hotel I headed back to PHOF to take some more photos as my camera battery had died on me the day before.

After that I got some tacos at a nearby Mexican restaurant and headed to The Strip to see it at night. Impressive. For the men who are familiar with bars like Hooters and Twin Peaks: forget those. The Cosmopolitan had a DJ and some girls dancing to his music in a way that was much more entertaining.

After taking the obligatory photos I went back via the MGM Grand, which was impressive as well. Very spacious. I was almost tempted to play some Craps, but the rules were different than how I used to play it in Dutch casinos, so I didn’t bother.

This was my first time visiting Las Vegas and despite the heat I had a pretty good time. Stay tuned for part 2: San Fransisco.