On Monday afternoon I flew to Orange County airport. After solving some issues with my rental car I got another car and drove to a very special location: the pinball collection of Steve Tsubota.

I’ve met Steve before at Pinball Expo and anyone who knows Steve will testify that Steve is one of the nicest people on earth. Humble as he is Steve doesn’t consider his collection to be very special, unless you’re a little bit more into pinball than just average. 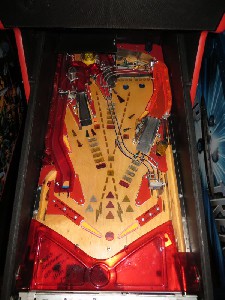 Krull actually blew me away as it has a very catchy electronic tune for background music. I’m not sure whether this tune was part of the original movie soundtrack, but it was so catchy that I recorded it as I think it is good enough to become a house music track.

For Pinball Magazine No. 3 I was especially interested in the prototypes of Capcom’s Kingpin and Zingy Bingy. Steve’s gameroom is simply impressive and unique. Besides being in a beautiful location and hosting a huge A-list of games, it also has a professional bar and even a wood-fired pizza oven . 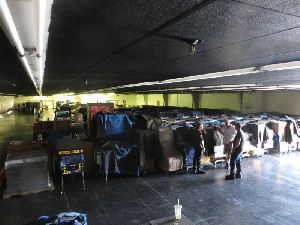 Steve was very pleasant company and we shared many pinball related stories. On Tuesday Steve took me to Banning, CA, to visit John Week’s pinball museum. In 2013 John tried to fund his pinball museum through Kickstarter. Unfortunately the goal was not reached, but that didn’t stop John from making his dream a reality.

While the building is still under construction, the majority of games are already present. The size of the place is enormous. John showed us around and explained his plans. While there is still plenty of work to do, John is aiming to host his first event in January 2015: ArcadeExpo. By then the location will host 750(!) pinball and arcade games. As far as I can tell that could make it the world’s largest public collection of pinball and arcade games. I sincerely hope John and his crew will pull this off.

Next stop was 82, a 21+ bar / classic arcade in the Arts District in Los Angeles. John joined us and took Steve and me to a Bratwurst bar for dinner. After that we went back to 82 and played some games.

The location had open Wi-Fi, which allowed me to check my Facebook. Interestingly enough the first post displayed was by Pinball Dame who had just checked in at 82 as well. Steve pointed her out to me and I introduced myself. 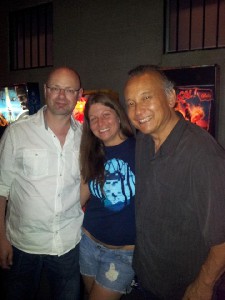 We chatted a bit and then John took Lisa, Steve and me to this Speakeasy he knew about. This was actually a bar within a bar. In the back was a hidden(?) door which allowed you to enter the Speakeasy part. This meant cocktail time 🙂 Lisa told us about her interesting career and plans in cooking. From what I understood she will run a top notch place someday.

After the Speakeasy we headed back to 82. John had to go back home, which was a pity as he missed the best part of the night. After parking the car a few blocks away Lisa, Steve and me walked to 82, to be stopped by a homeless man, probably in his 70s or 80s. He wanted to entertain us by singing a song.

At my request for some soul music he sang “Ain’t too proud to beg” by the Temptations. In all honesty, he was pretty good. We gave him a few dollars and then I asked whether he could improvise if I gave him an 8-bar four chord musical loop. Sure he could. 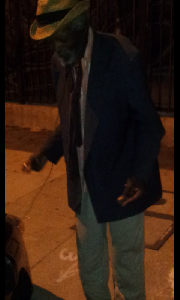 Octive Fellow Soul being recorded on the street

So we then walked back to the car, I took my laptop from the trunk, and pulled out the earlier recorded soundtrack from Krull. Octive Fellow Soul, the name to which he introduced himself to us, said he could work with it. I quickly started Ableton Live on my laptop and pulled out a pair of headphones. These were needed to avoid hearing the music on the recording while he was singing.

I hit record and OFS got into his groove. Interestingly he turned the track into a 12-beat by snapping his fingers and clapping his hands. He sang an original song called “Cold feet”. His soulful voice was an interesting addition to the electronic music from Krull. So there we were, Lisa, Steve and me, recording this homeless guy on the street with cars driving by, planes flying over, and he took it away.

After he sang his song, he actually sang it again. This time without the headphones, in his own tempo which was slightly faster. I quickly hit record again, so I got two takes of him singing his song.

These days you need a good story to break a song to radio stations. If this isn’t a good story, I don’t know what is. Now I just have to build the song around it and who knows? I may have recorded a future hit record right then and there.

Next we walked back to 82 where we said goodbye to OFS. I tipped him generously for his collaboration and then we went inside. The place was pretty full, but still in a pleasant way. Not bad for a Tuesday night. Apparently during the weekend it’s much more crowded, so who says you can’t make money operating pinball? You just need a good formula to mix it with.

At 82 I met Mike, with who we played a couple of games. Kelly Masurowski was also present and it was great to see him again. I gave him what I hope was a helpful suggestion regarding his JJP situation. Let’s see if that works out for him.

Way past 01:00 AM Steve and I finally left, said goodbye to Lisa and headed back to Orange County.

Interestingly the place is run by two guys, Robert and Ron. Robert originates from The Netherlands, just like me, and he collects rare European games.

In the lineup he had a Bushido by Inder, a Spanish manufacturer. In his private collection he has many more titles that are rarely seen. The presence of a Flipper Football by Capcom was a nice coincidence, as I was still looking for an example of this game to take photos of for Pinball Magazine No. 3. So I took those right away.

ColorDMD’s Randy Perlow came over to see me and we discussed a lot of stuff outside. Inside was simply too hot. Mike, who we met at 82, was also present. Steve came over as well and although he intended to leave by 10:00 PM, we were still talking in the parking lot way past midnight. Time flies when you’re having fun.

Pinball Land was my last stop before flying home the next day. I had a great trip and if there is one thing that I got confirmed over and over again it’s that it’s the people who make the pinball hobby so much fun.

This automatically implies that my trip would not have been so much fun if it wasn’t for John Balogh, BigB, Gene X, Suzanne Ciani, Michael Schiess, the folks that organize CAX, Tanio, Kelly, Steve Tsubota, John Weeks, Molly (82), Lisa (Pinball Dame), Randy Perlow and all others I met during my trip.

Thanks all. Hope to be back soon.