EAG Expo in London, United Kingdom, is usually the first European amusement tradeshow of the year, and this year is no different. Compared to previous editions there are some differences when it comes to the representation of pinball. 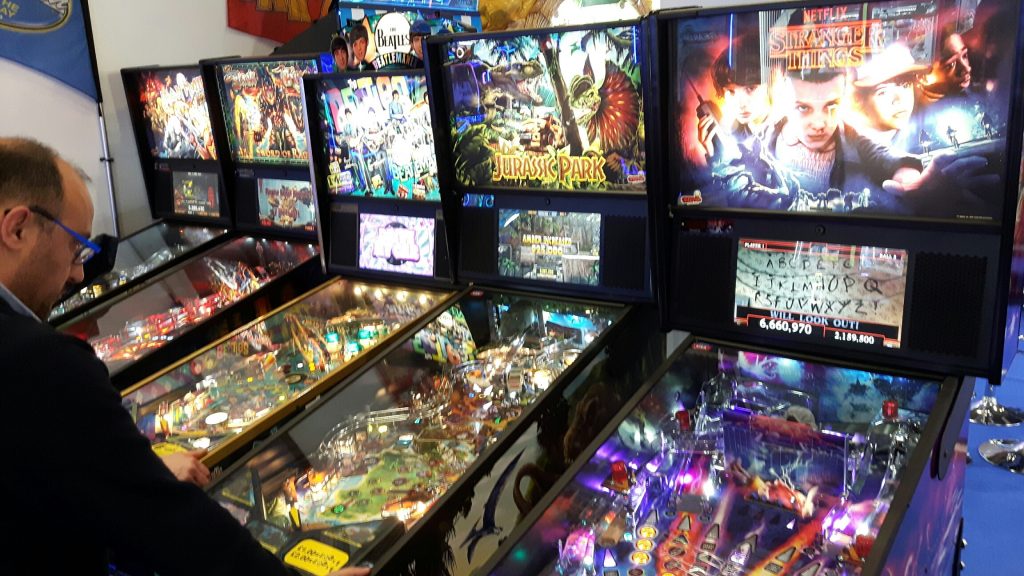 Stern Pinball is represented by Electrocoin, their UK importer, and they appeared to be the only pinball company present with games. At the Electrocoin stand, five Stern pinball games were set up, as well as quite a few redemption games from other manufacturers. The pinball games present are: Iron Maiden Pro, Black Knight Sword of Rage Pro, The Beatles Gold Edition, Jurassic Park Pro and Stranger Things Pro.On a wall, next to the games, Electrocoin has put up a piece of paper with an EAG rental offer for pinball machines, as can be seen below. It looks like a very reasonable offer to me. 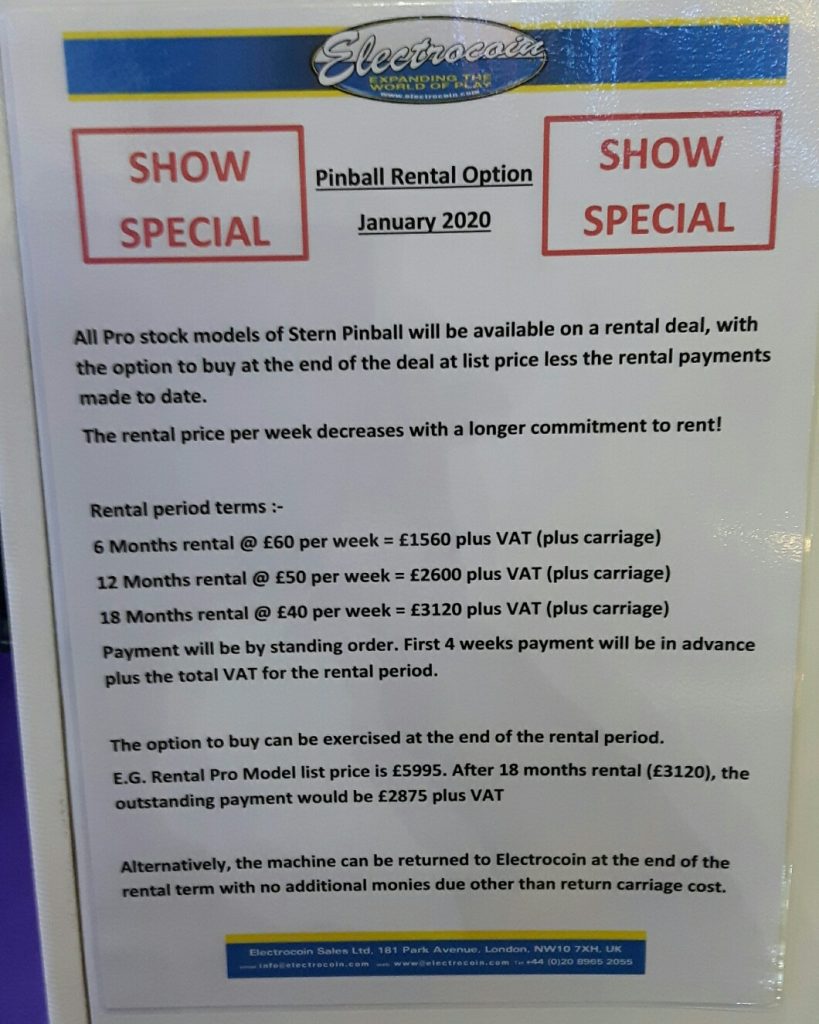 There is also a Stranger Things Premium model present at an upstairs conference room, where business meetings are held by the team of Stern Pinball representatives. 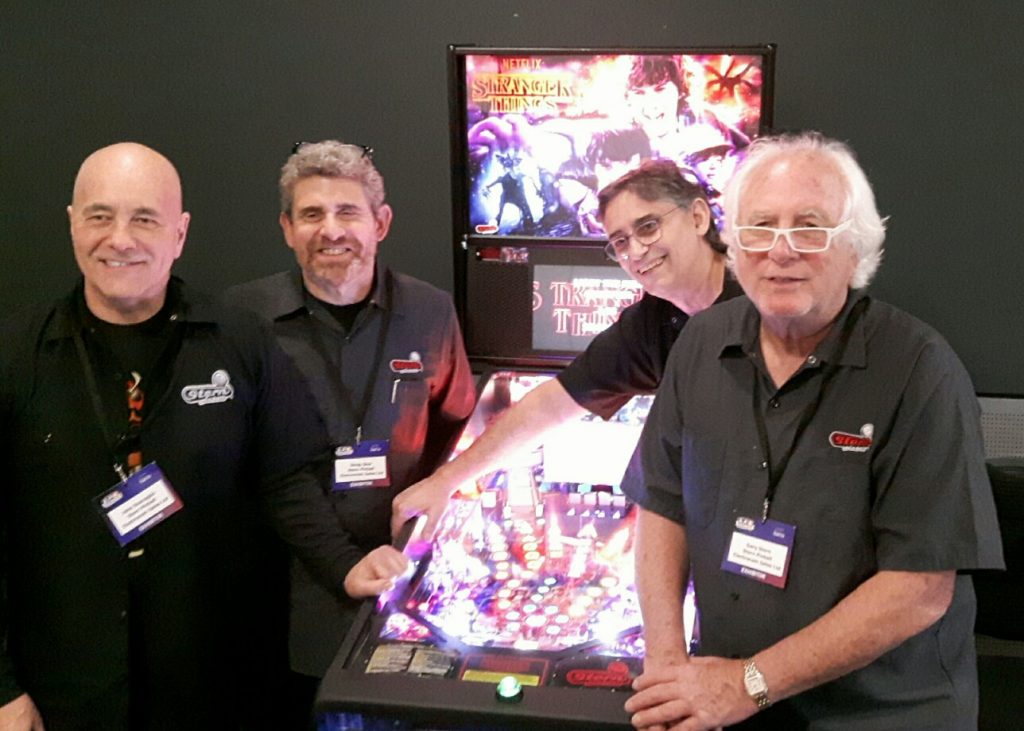 Stern’s delegation this year: Gary Stern, Doug Skor, John Buscaglia, George Gomez, and Dave Peterson. The presence of Dave Peterson was unexpected as he wasn’t announced in a mailing from Stern Pinball about the show, which was sent out last week. Dave actually brought his family, including wife, daughters and one of the daughter’s boyfriend as well.

Speaking of Dave Peterson, he was one of the first people I ran into at the show. When discussing the past year and plans for 2020, they decided to sit down and record a small audio interview. This interview will be part of the upcoming Pinball Magazine & Pinball News podcast that will recap the pinball industry news of January 2020. 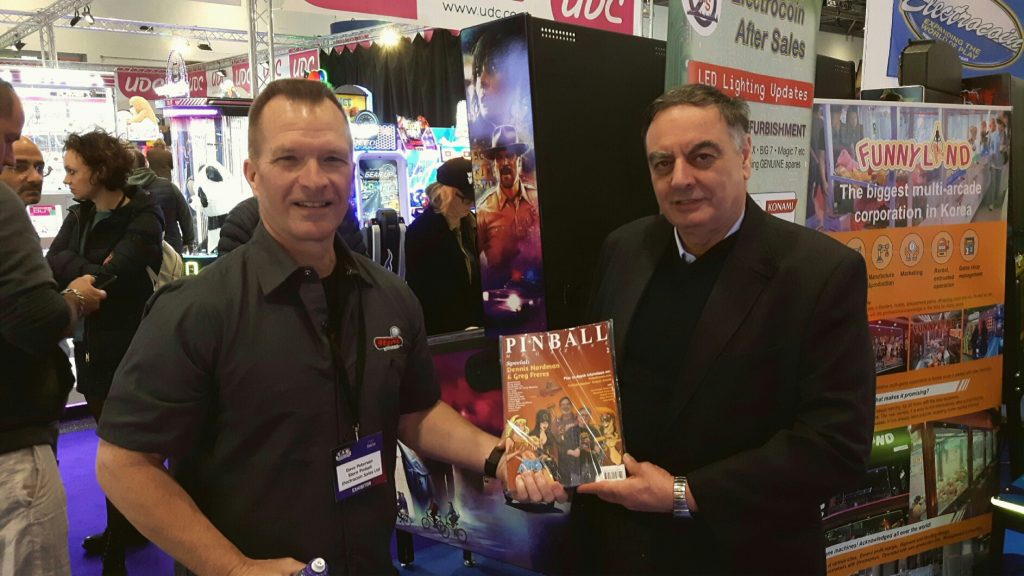 Dave Peterson (Stern Pinball) and John Stergides (Electrocoin) with a copy of the recently reprinted Pinball Magazine No. 2, which John was missing in his collection.

As for the Stranger Things Premium model, this was available to play upon invite by the Stern team in an upstairs conference room. The light in the room was a bit more dimmed than on the show floor, so the playfield projections would be very visible. Taking pictures was not allowed, however.

The first thing I noticed is how photos of the game really don’t do the game justice. It looks much better in person. The animations projected on the playfield also look very promising. Yes, it’s a projector and that has its shortcomings, especially in well-lit areas, but for pinball, it’s an innovation. If utilized to its full potential, this could be the next evolution in pinball. All of a sudden we’re looking at animated images on the spinner, standup targets, ramps and whatnot. As this is a new technology for Stern, the current use of such a playfield beamer is only scratching the surface of the possibilities. It would be a pity if this technology would not be used on future games as well.

While the Premium model of Stranger Things was only shown to business relations, George Gomez asked me to gather as many pinball enthusiast that were at the show for a short showcase in between meetings of the sales team. So a handful of people showed up and gathered around the game. George Gomez was explaining the use of the projector and defending the layout being a fan layout. Apparently not everybody feels that a layout that appears to be similar to some of the best games in pinball is a compliment. George also explained how the magnet that grabs the ball onto the backpanel, is not an electromagnet, but a permanent magnet instead. This way, the balls can stay up the backpanel for a very long time, without a magnet having to be energized. The trick to release the ball: remove the magnet from the backpanel. Very clever. George also mentioned they haven’t decided yet whether the locked balls on the backpanel will be stealable in multiplayer games, or not. 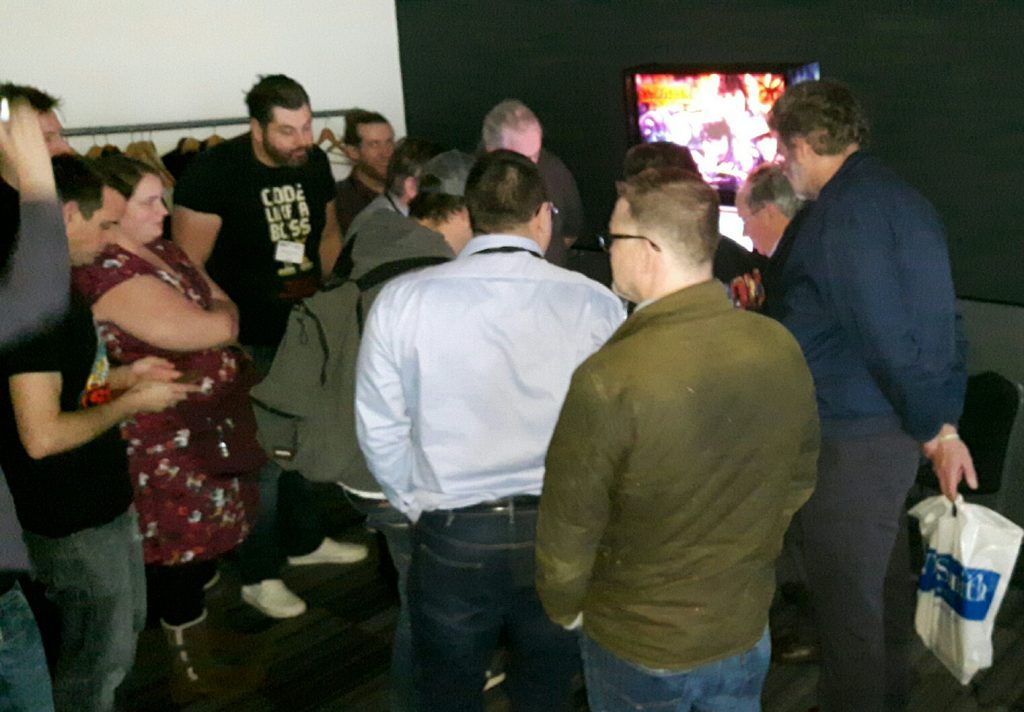 As far as Stranger Things goes, here are my observations from playing the Pro and watching others play the Premium as well. It seemed to me that the code on the Premium model was further along. On the Pro model, with its current code, shooting the Demogorgon bash toy wasn’t worth that much points. Over the two days I was at the show, I didn’t see anybody actually make a successful shot through the demogorgon bash toy on the Pro model. On the Premium, I saw it happen twice, and both times it turned out to be to great joy of the player. Maybe the toy on the Pro model needed some adjusting?

Scoring on the Pro appeared to be rather unbalanced at the moment. Good news for operators: game times were relatively short. I was also happy to see the game isn’t that much of a multiball fest as some other games where multiball seems to be the reward for anything. It actually took me quite a few games before I even got a multiball going.

The question I got asked already several times: is Stranger Things the new Attack From Mars or Medieval Madness? At the moment I’d say: not yet, but the potential is certainly there (although I have no idea whether Stranger Things has any humor in it and whether that can be implemented in the game). During gameplay I was expecting certain shots to act like Attack from Mars, but they didn’t as far as I could see. E.g: no total annihilation type of mode when all shot-related modes have been played. At least, I think I completed them all, but maybe I didn’t? In terms of music, I think the music on STh is a bit darker than on AFM or MM, which also affects how players experience the game. For now, I’ll suggest keeping an eye on the game and how code develops. For what it’s worth: I saw one pinball enthusiast who got so excited about the Premium model that he told Gary Stern he was canceling his Pro order and would order a Premium instead.

As for other companies at the show, Unys impressed me the most with three innovative games. Their Jetball is like a Skee Ball game with a Tic Tac Toe maze to aim for. The innovative part: the game uses the same technology as Pinball 2000 did to display points that can be won, using a seethrough mirror placed in between the player and the maze. Very cool innovation of a classic game. They also presented a frisbee game where players throw frisbees at tickets scrolling by on a big screen. A conveyer belt is then used to return the frisbees to the player. Their hitgame turned out to be an airgun shooter. The gun shoots little plastic balls to a large LCD on which various moving targets in various situations are displayed. The gun turned out to be very accurate and the game impressed me quite a bit (and I’m not into gun games). Unys is also the company that is producing the 3D Pong table, of which they now also offer a 4-player version.

That’s it for this year’s EAG Expo. It was fun as always and I look forward to coming back in 2021.