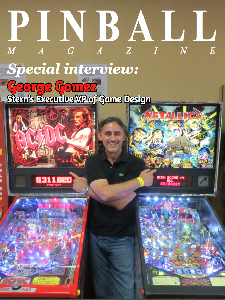 While a lot of attention has been going to Santiago Ciuffo’s PINBALL book, of which a new batch of orders will ship the first week of July, Pinball Magazine has also been working on interviews for Pinball Magazine No. 3. In the fall of 2013 Pinball Magazine sat down with George Gomez, Stern’s Executive Vice President of Game Design. George has been designing all sorts of things since the late ‘70s, including very popular pinball machines such as Monster Bash, Revenge from Mars, Lord of the Rings and more recently Transformers and Avengers. While this interview was intended to be published in Pinball Magazine No. 3, it is now published separately in between Issues, since Issue 3 is taking longer than anticipated. New questions have been submitted to George in order to publish a more up-to-date interview and George was kind enough to answer these as well. They have been edited into the original interview.

Please note that this interview does not focus on George’s career in pinball design, as we’d prefer to do that as a cover story at some point in the future. Instead the interview focusses on George’s current position at Stern Pinball and new developments in the pinball industry.

This downloadable PDF will also give you a taste of what Pinball Magazine looks like and the quality products it produces. If you’re not familiar with Pinball Magazine No. 2 and/or Santiago Ciuffo’s PINBALL book, check these out as well.