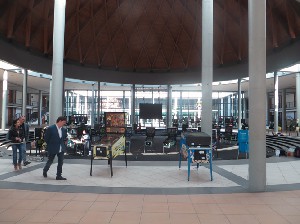 Italy has two large coin-op amusement shows. One in authumn in Rome and one in spring, which is where Pinball Magazine is currently reporting from. Visitors who came in through the south entrance were instantly confronted with the build up of pinball machines for the European Pinball Championship that will take place in the same venue, starting this friday. Eventually all main tournament machines will be placed in the lower circle, while the recreational and side tournament games will be the row in the back. 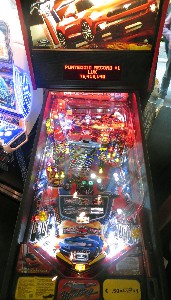 After crossing over to the halls where Enada is held it wasn’t that difficult to spot the Tecnoplay stand. Tecnoplay is distributor for Stern Pinball in Italy and they had the premiere of the first public showing of Stern’s latest Mustang pinball machine. Sadly it was also the only pinball machine in their booth. Stern president Gary Stern was also present to talk to operators who may be interested in his games. Gary immidiately pointed out that he just updated the game with the latest software, but they are still working on it. Friday morning, prior to the start of the EPC, he will update the game with the latest version available. Gary also noted that there is a new update for Metallica, which now has two new songs in it that people could vote for earlier on Facebook. 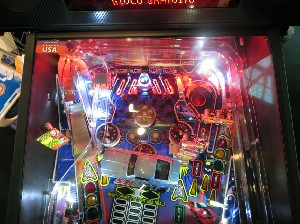 As for Mustang, I was able to play quite a few games on it today. For an objective review I will gladly recommend to read the upcoming review on Pinball News. My observations are likely to be less objective and reflect more of what I like in a game (and what not). Obviously the software is not finished, which has to be kept in mind. Aside from that a lot is already in the game. It took a few games to get the hang of how the game currently works. Upon starting a new game the player can choose between six modes, each corresponding to one of the six Mustang car inserts in the center of the playfield. each mode also has his own music, which are songs from when that model came out. What made it a bit difficult to understand what is going on in the game is that the names of the various modes can’t be found on the playfield. They turn out to be linked with each of the models, which can be seen in the display, but just going by the voice calls it wasn’t easy to make the link. The six cars and modes the player can choose from are:

By default the game selects Drag Race, which – if I may voice my humble opinion – is a mode I would recommend not to start with by default. In this mode knocking down the 5 center drop targets starts Gear Shift Multiball. That can actually be achieved in flipping 3 times. So, you’re barely 20 seconds in the game and you already started Multiball. What’s the challenge in that? I discussed this with Gary Stern, who thinks it’s great for caual players. I would strongly suggest the programmers of the game to not make this mode the default mode, as I feel it makes the game less fun and less interesting to further explore. When you already played multiball, what else is there to discover for the casual player? I’m sure there is more, but the for the casual player achieving multiball is probably the biggest achievement / objective they may be aware of. I would also suggest to reset the number of hits made to the drop target bank in case the ball drains. Else you may start Gear Shift Multiball on your next ball with a single shot, which not not very challenging either. Having to start over again, is at least a bit more challenging and it would perhaps even be better if more than 5 dropped targets would be needed. 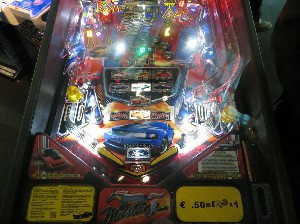 Since I’m already making suggestions on a personal note, I should also mention that the volume of the music is way to low compared to the sound effects of the game. At one point Gary was kind enough to set the volume louder and these car sounds where so loud that several players stepped away from the game as it was hurting their ears. Yet the music was still in the background. If it is true that women decide in some cases which game is bought for the home gameroom, I doubt many will favour Mustang for its lovely mechanical car noises over other games they can choose from.

During Gear Shift Multiball the droptargets score Jackpots (with quite a few fastly annoying Jackpot voice call outs) and at times the left ramp’s upper entrance to the top ramp drops, allowing the Super Jackpot shot. That ramp goes from the top left corner along the backpanel, down to the right, ending in whirlpool. You can keep the ball spinning in the whirlpool by nudging the game, but at the moment it doesn’t seem to award anything special. It’s also not clear to me at this point what is required to get the Super Jackpot shot to be enabled.

Getting back to the game itself, I was actually pleasantly surprised. I could care less about cars, so that’s nothing to get excited about for me. The game does look better up close than some of the photos that were posted online do suggest. With the miniature car blocking your view on the top half of the playfield, I was actually surprised to see the game has four popbumpers. Above these popbumpers are four rollover lanes, each with two inserts above them. Lane change only works on the bottom row of these inserts, the ones with the Mustang horse logo. At the moment it seems, and I could be completely wrong here, that completing the bottom row of rollover lanes lights up the Update LED that can be shot at the kickout hole right of the GEARS droptargets. It also seems to reset the Mustang rollover lanes and when hit again a new light in the top row of rollover lane (with the Ford logo) inserts lights up. When three or four of these Ford logos are lit they seem to award something. Not sure yet what, but it could be a MUSTANG letter in the backpanel.

As for the other modes: the Stunt Driver mode does remind me a little bit of Medieval Madness as the voice of this stunt driver has a typical French accent. In the Rally Race mode you’re joined by a navigator. As the game will hint the player where to shoot by lighting up yellow arrows, this could become a funny mode where the navigator will direct the player with voice calls as well, but I didn’t hear that many other navigator call out so far and I may have the completely wrong idea of what this mode is about.

It was also not very clear to me how some modes, like the Cruising mode, can be finished. Some modes seem to be timed, or are Multiball modes – which end when you’re down to one ball -. When these modes end the New Car LED will light up at the kickout hole and when shout you can select a new mode. Currently only the six modes mentioned above can be selected. The 2012 Boss 302 and 2015 Mustang inserts can not be selected by the player and are likely to be Wizard modes that can only be played after the other six (or seven) modes have been completed.

I’ve seen other players achieve MUSTANG Multiball, but haven’t figured out yet how to get to that. The instruction cards are in Italian, which doesn’t help much. 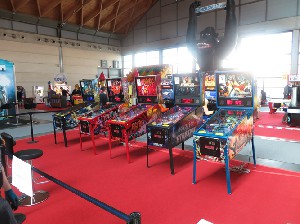 Obviously there is more to the Enada show than Stern’s latest game. Actually there was another Mustang game present at the show, as a side tournament game in a special tornament area not far from the Tecnoplay stand. In this tournament area five recent Stern games where set up as a mini tournament. Entering the tournament costs 5.00 Euro and allows you to play two games on each of the five machines. These games are: Avatar Pro, X-Men (Magneto LE), AC/DC (Luci Premium), Star Trek Pro and Avengers LE. A nice line up for a tournament. 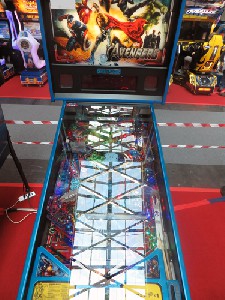 When entering the tournament area however it became clear that this tournament has an extra handicap: the reflection sunroof of the building. With bright sunny whether it becomes very difficult to see the ball moving on the playfield due to this bright refelection. However, as the handicap is the same for all players, it’s game on. 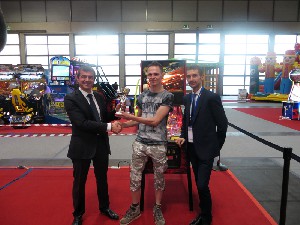 On the right of the tournament games was the other Mustang pinball machine on which a side tournament was being held. This was free of charge. On this first day Lukasz Romanowski managed to win today’s trophee with a score of 85M. On the photo he’s being handed his trophee by Mauro Zaccaria of Tecnoplay. Alessio Cristatemi, organiser of the EPC is also present. 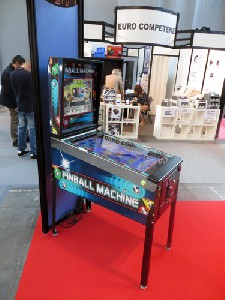 There was still more pinball at the rest of the show. In the back was this virtual pinball machine with four different games being available. These games actually are the same as in the virtual pinball machine shown by The Pinball Company at this years IMA show in Germany, but further developed. More sections of the backbox display are being used to display scores, but still not as interactive as is possible with an LCD monitor. 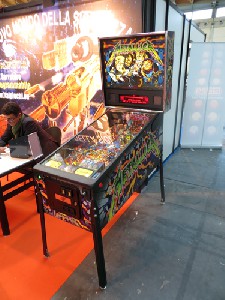 Right next to this stand was another stand which had a Metallica Pro pinball machine. 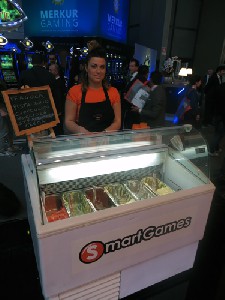 So with this show being in Italy, one can wonder whether it is any different from other shows in other parts of the world. Well actually there is a benefit of being in Italy: free ice cream. At least at three different stands free ice cream was available in the most delicious flavours. Trust me on this one, I’ve tried them all 🙂 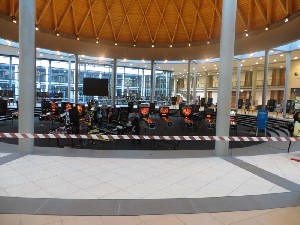 When leaving the show the EPC area now looked like this. There are a little over 70 games present. Mostly dot matrix games and a few games from the ’80s. No electromechanical games.

Day 2 saw another update from Gary being installed on both Mustang games at the show. In terms of the rules this game seems to have some interesting ideas incorporated. E.g: every time when you knock down the GEARS droptargets you shift a gear up on the playfield. When you reach 3rd gear you can start a 3-ball multiball. YOu can also choose not to start it, or even abort it and try to gear up, which makes it either a 4-ball, 5-ball or 6-ball multiball. Supposedly the SuperJackpot increases also when more balls are in play (although regular jackpots of 150,000 in 5-ball multiball seem a bit low.

With several people we’ve tried to figure out how to spell the MUSTANG letters in the backpanel, which lead to Mustang Multiball, bit so far no luck. We’ve seen it being played a few times, but that seemed more like luck than skill.

It was also nice to see more people and familiar faces come in. More updates the next few days.