Initiated by Pinball Magazine editor Jonathan Joosten none other than Gary Stern, president of Stern Pinball, paid a surprise visit to the Pinside HQ. Pinside.com is currently the largest online pinball community, but it originally started out as a hobby project of Robin and Martijn van Mourik. In Pinball Magazine No. 1 an article about the history of the website was published.

Since Gary Stern would be in Europe for two trade shows, Jonathan Joosten informed if Gary would be in for a surprise visit to the van Mourik brothers, who usually have an open pinball night each Friday. Gary was instantly on board and actually very enthusiastic about this visit. One of the first things he Told Robin was that he never realized Pinside originates from The Netherlands. 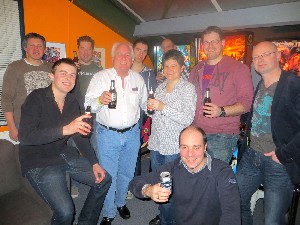 Gary enjoyed a home cooked lasagna at Robin’s house, while dishing up pinball stories. After dinner Gary followed Robin and Martijn to The Koog. This is their shared game room where only a few people got hinted they might want to come over this evening. Gary spent the night playing some of the Data East and Sega pinball machines that were present and ended the night dishing up some more pinball anekdotes.

At the end of the night Robin, Martijn and Gary all expressed how much they enjoyed this visit. They’re already looking forward for a follow-up opportunity later this year.

Special thanks to Gary Stern and Jody Dankberg for their kind cooperation. A full report on Gary stern’s visit is likely to be part of the upcoming Issue of Pinball Magazine. In case you wish to be informed when the next Issue will be available, subscribe to the free Pinball Magazine Newsletter in the column on the right of this page.