If you’re attending IMA just for pinball, it may very well lead to some disappointment. The past years the show was already very slot machine / AWP dominant and this year was no different. The show is spread over two halls. In one of the halls former pinball manufacturer Bally Wulff took over half of the available space for exhibitors, but they mostly displayed slotmachines.

In the other hall the biggest stand was by Merkur / Gauselman. This is where the Stern pinball machines are usually found. Sadly the only pinball machine present in this stand was one single AC/DC Luci Premium. Gary Stern of Stern Pinball was around to talk to people when he was not occupied for business meetings. Besides only one pinball machine in their stand, there were also no flyers of pinball machines available. There was the Merkur catalogue, which contained photos of two Star Trek models, but that was it. 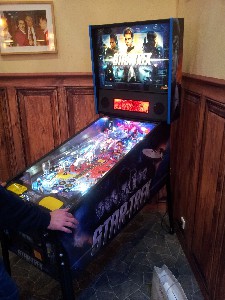 It turns out there was a Star Trek Pro also present in another stand, which Gary pointed out. Unfortunately the game was set up in the corner of a bar area and not visible for people just walking past the stand. Both AC/DC and Star Trek played like brand new just unboxed games.

There was another pinball product that was presented more notable. Actually that’s a bit of an understatement as most pinball enthusiasts would rather see any pinball company present itself in similar fashion as The Pinball Company did. They had a stand with 8 games of their Pinball 42 model. This is a virtual pinball machine that consists of two LCD flatscreens: one for the backbox and the other for the playfield. The game presents five different pinball tables, each with their own theme: Attack, Western, Speed Limit, Halloween and Apocalypse. There were also flyers present (in German) and each game was standing on a small rug with the company logo on it. 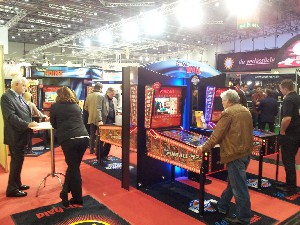 Originally the website of The Pinball Company had listed two other tables: He-Man and Hell On Earth. The last one turned out to be a rip-pff of Terminator 2, and even included some of the artwork from the original game. When asked about these games I was told they were removed because of a technical difficulty. It is however more likely that the intellectual property of He-Man and Terminator 2 can’t be used without permission and the tables were removed due to lack of such permission.

While the tables look improved compared to similar games shown at EAG two years ago, they do miss 3D dept on the playfield. While the games all have different modes it just wasn’t a real pinball experience. The ball also looked more oval than circular and the speech and music in the games lacked creativity.

Oddly enough the backbox screen displays for most games an alphanumeric display. Only one of the tables has a dotmatrix display. So while they could use the entire LCD to interact with gameplay, they don’t. The right side of the display is used for displaying scores by player 1 – 4. The game takes your photo after entering a high score, which actually happened to be every time.

Although a virtual game it turned out that it was actually possible to have stuck balls on the game and the game needed to be physically lifted to get the ball rolling again. So apparently the game has some sort of tilt mechanism. 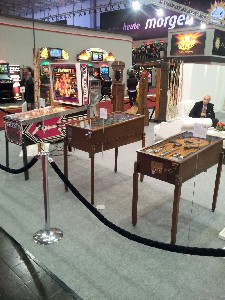 As for new games, that was it. There were three more pinball amchines displayed o in a coin-op exhibition: two games fomr the ‘30s and a Bally Playboy. However, despite being in very good condition, these were not playable.

And that was all as far as IMA goes. This post will be updated with photos during the weekend. Next week Pinball Magazine will report from the EAG Expo in London. There should at least four pinball companies be present, so it already looks to be more interesting than IMA (for pinball enthusiasts that is).