Next batch of Pinball Magazine ships early next week 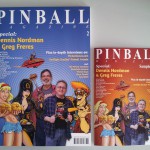 Following a heavy promotion at Pinball Expo and Northern Lights Pinball, the next batch of Pinball Magazines will ship early next week. Originally this batch was scheduled to ship out October 24th, but due to popular demand not all orders could be processed in time. The good news about this slight delay is that it will allow more people to order their copy of Pinball Magazine No. 2 in the web shop and have it shipped right away.

Pinball Magazine No. 2 is a 188-page in-depth, printed glossy covering the entire career of pinball designer Dennis Nordman, including games like Elvira and the Party Monsters, Scared Stiff, White Water, Pirates of the Caribbean, and many others. Pinball artist Greg Freres joins Dennis and recalls many interesting memories from the games they both worked on. The magazine, which according to many is more like a book, also features other interviews about: the two Elvira themed pinball machines (Cassandra Peterson), The Pinball Arcade app (Bobby King), ColorDMD (Randy Perlow and Chris Enright), Stern Pinball (David Peterson), The Pinball Company (Nic Parks), Silverball Museum (Rob Ilvento) and much more.

Update: This batch was shipped out october 28th.