Saturday did not have many seminars. Pyhton Anghelo, who will be featured in the cover story of the upcoming Pinball Magazine No. 3, did a large seminar about what he thinks the future of pinball should be like. As the seminar was recorded by Pinball News I only watched it partly and focussed on doing some more interviews for other articles in the upcoming third Issue. I was able to play some of the P-Roc games exhibited at the Multimorphic stand and talk to the people behind these games.

Gene Cunningham from Illinois Pinball was doing his own show in the Comfort Inn, 4 miles down the road, and we (Martin Wiest and I) went over there to but some parts I have been looking for. As I have worked for Gene in the past it was nice to see him again. After this visit we went back to the Expo hotel to attend the autograph session. I took some photos and collected some signed flyers. I bought a pack of signed KISS backglass posters from artist Kevin O’Connor. Very nice guy. 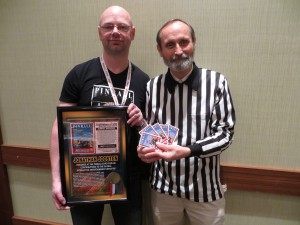 When the autograph session had ended Walter day presented to me a framed “award” from twin galaxies for the Pinball Magazine trading card. From the class of 2013 only six people will receive their award during the saturdaynight banquet. The others received their awards in a more private setting. We took some photos and i signed a bunch of cards for their archives. I am very honored that Pinball Magazine is featured of a Twin Galaxy trading card, especially realizing so far only two Issues have been published.

Right after this Martin and I had to do some rushed shopping in order to be able to take home all the items that we bought during Expo. Then it was straight back to Expo to join the banquet. This banquet features several elements besides a meal and beverages. Interestingly enough alcoholic beverages are not part of the banquet package and was sold in the lobby. $12 for a beer… There appeared also to be not enough seats for all who bought tickets for the banquet and some people received a refund as they could not be seated.

Prior to the banquet Roger Sharpe, who featured in the cover story of Pinball Magazine No. 1, was kind enough to autograph the only two posters of the cover of Issue 1 that I had brought to Expo. The plan was to auction these in the charity auction prior to the banquet, together with two autographed poster from Issue 2. Well, that plan turned south once Joe Kaminkow bought a poster of Issue 2 for $ 40.00 and then put the poster back up for auction. The other posters where not even brought in. So I doubt if I will donate some more items in the future for such auctions.

The auction itself was fun and after that (finally) we could get food in the back. The turkey meat and desserts were very good. After dinner Steve Ritchie and Eugene Jarvis spoke about the time they both worked at Atari in Californa and eventually joined Williamd in Chicago. Their talk was filled with funny comments, which made it a great entertaining element of the evening.

After the banquet I was able to do an interview with Ben Heck, who was displaying his America’s Most Haunted game. Ben had already drank a few beers, but since it will end up as a text interview in Pinball magazine No. 3 that should not be noticable. I went on to play some more pinball and also briefly attended the LTG show in the seminar room. Lloyd Olson, the host, was kind enough to call me on stage and have me talk about Pinball Magazine. After that I assisted in a raffle that was being held.

Around 3:00 AM I head to my room in order to pack all the stuff I bought. Then it turned out I was not flying back home on Sunday, but 24 hours later. So I had to ficuge out what to do, and where to stay, this extra time. Luckily I had met a few guys from Germany earlier in the week that are staying in another hotel and they offered me to stay with them. As Expo was finished there was not much to do on Sunday, aside from the tournament that was being played. While vendors were packing up I was able to play some games on the Dutch Pinball upgrade of Bride of PinBot. What a fantastic game these guys created! Their dotmatrix animation are probably the best ever seen in a pinball game. Seriously. Innovative new features and game rules, fantastic soundtrack and voice calls. This game rocks! Congratulations to Koen and Barry for creating such a kick ass game! If you own a Bride of PinBot game, make sure you order the Dutch Pinball upgrade kit. You will enjoy your game so much more.

With me flying back home tomorrow this concludes my coverage of Pinball Expo 2013. I had a ball and will definitely be back next year. It was great to receive so much positive feedback on Pinball Magazine and it surprised me that all available copies of Issue 2 were sold out already on Friday evening. Only by making some arrangements with people who reserved multiple copies I was able to offer a few more copies on Saturday and they were gone in minutes too 🙂

As a reminder: Those interested in a copy of Issue 2: they are available in the Pinball Magazine webshop: www.pinball-magazine.com/shop/ The price, including shipping to USA is the same as the magazine sold for at Expo and cardboard envelopes are used to make sure your order arrives in good condition. All orders coming in prior to October 24th will ship this week.

Last, but not least: a big thanks to all who made this edition of Pinball Expo such a blast!

Photos to be added at a later stage, text to be revised.