Today I intentionally missed some seminars to get some sleep. I missed all the morning seminars and once I got up I found out about the news of the day: Planetary Pinball announcing a remake of Medieval Madness. Apparently all 1,000 LE’s are already sold, although distributors may still have some available.

During lunch (breakfast) I was introduced to a well respected pinball industry icon that I had contacted previously, asking to collaborate on Pinball magazine No. 3. Special thanks to Martin Wiest who introduced me. It was a great opportunity to explain what the magazine (book) is about and that it looks like this helped to get on the same page 🙂 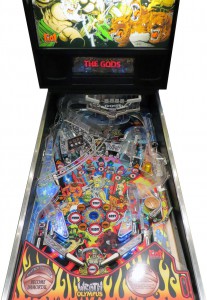 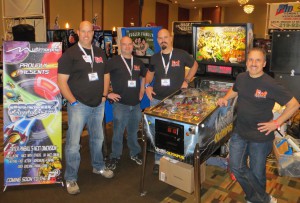 The team behind Wrath of Olympus

On the vendor floor I played the Wrath of Olympus game and talked to designer Scott Gullicks about the game. Wrath of Olympus is the first game that is actually designed in Visual Pinmame and then turned into a real pinball machine. I was actually surprised to see the game was a widebody, as looking at photos hadn’t shown that to me at all. I played a couple of games on it and gave some (hopefully helpful) suggestions to the team to keep in mind when they continue the development of the game. Nice guys by the way. The game itself it truly packed. Just look at the playfield. There’s not a single post to be hit, it’s all targets and shots. The artwork is also very nice. The interview I did with Scott will be part of a larger article on people designing their own games, which is scheduled to appear in Pinball Magazine No. 3.

I also talked to Matthew Bonnema, who was exhibiting his Deadpin design. Interestingly Matthew doesn’t seem to have a pinball background as a player. He got involved in pinball by fixing a game for someone else and then figured he would try to build one on his own. That kind f reminds me of myself when I discovered pinball at the age of 8 and then tried to turn a fussball table into a pinball machine. Matthew’s attempt looks a lot more successful than my attempt at the time, but it still is far from complete. 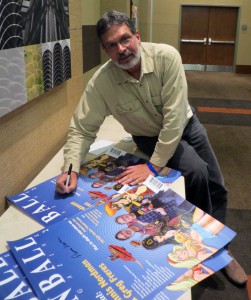 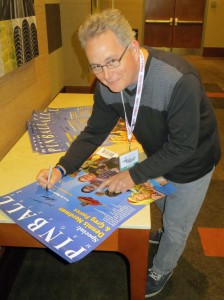 In between seminars I asked Greg Freres and Dennis Nordman, both featured in the cover story of Pinball Magazine No. 2, to sign some Pinball Magazine cover posters of which some will be auctioned for charity on Saturday night.

From all of the seminars I attended this Expo the highlight was PinGame Journal’s seminar that had the Xenon designteam on stage, including the voice of the game: the lovely Suzanne Ciani. Suzanne’s voice is so remarkably sexy, even today. This seminar is highly recommended, so do check it out on Pinball News.

Later that night I caught PinGame Journal editor Jim Schelberg redhanded trying to fix some tears he created in two posters of Pinball Magazine hanging near the entrance, which he moved to hang an even larger poster with his own logo. He explained he was trying to fix them and that he had forgotten to put up his own posters earlier. I just poked fun at him for moving my posters down and damaging them.

Python Anghelo in his booth

In the vendor hall Python Anghelo, who is scheduled to be the cover story of Pinball Magazine No. 3, had installed himself in a booth with some of his paintings. He was trying to talk to people, but there was not much left of his voice. Luckily his voice was in better shape earlier the same week when we did some interviews for the upcoming article.

I was able to do some smaller interviews for Issue 3 and also talk to some pinball industry people that hopefully will be interviewed at a later stage, also for Issue 3. On the vendor floor Pinball spare Parts Australia was selling the last copies of Pinball Magazine No. 2 that I brought, which made me realize I need to bring more next year. I also received a few copies of the sold out first Issue, so those who reserved a copy should all be able to order one after Expo.