On Thursday morning Expo organizes the Stern factory tour. I was offered to sell Pinball Magazine No. 2 next to the Stern merchandise stand, so Martin Wiest and I decided to not use the bus ride Expo is providing, but instead drive up early in Martin’s rental car. Copy editor Paul Rubens joined us as well. It was his first visit to both Expo and Stern. When we got to Stern a first group of people was already given a tour. Sales manager Jim Belt was kind enough to give us a quick private tour.

Star Trek Pro was the main game being manufactured, although a second assembly line was also set up where playfields for The Pin was being assembled for the upcoming holiday season. There where Pin cabinets for both Transformers and Avengers all over the place. Some AC/DC’s where also being finished up. 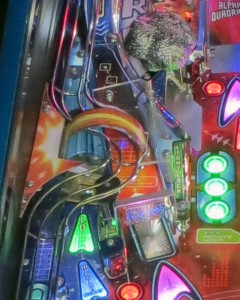 At the end of the tour a Star Trek Limited Edition game was displayed. People could only take pictures of it. Compared to the first photos of the LE and this game it became clear that the left Vertical Up Kicker, which has the left ramp going around it, has changed. The ball is now shot onto the left ramp via an upside down U-assembly, similar as used on a game like Spiderman. So the ball won’t be shot up the left ramp like the catapult does on Medieval Madness, but the outcome is still the same: the ball is guided to the left inlane. I asked about the change in design and apparently the original VUK design turned out not to be reliable enough, so they had to change it. The tour finished with the merchandise stand where visitors received a Star Trek launch party flyer and a 2013 factory tour pin. 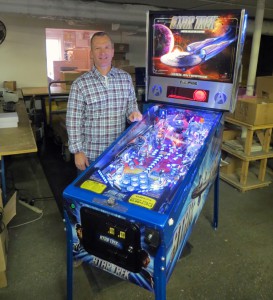 After the private tour I set up next to the merchandise stand while Paul, who visited Stern for the first time, went with another tour. Within an hour all the magazines I had brought to Stern were sold, which allowed me to catch up with several Stern employees and managers. Investor Dave Peterson was present and we did an 8-minute interview as a follow-up to the interview that is published in Pinball Magazine No. 2. This follow-up interview will soon become available for free on the Pinball Magazine website (update: the current draft is sent to Dave and waiting for approval).

I also had a very nice conversation with pinball designer John Borg. John told me his next game was supposed to be ready January 1st 2014, but was moved back to April 1st. That gave him more time to work on the game (and time to breathe) which he’s really happy about. John called this design different, but in a good way. The game following Star Trek will be John Trudeau’s new design. When  I spoke with John Trudeau later he also described his design as different in a good way. So we may be up for some different playfield designs on Stern’s next titles.

After the Stern tour back at the Westin the seminar program started at 1:00 PM. I was not able to attend all, but I managed to see the seminars of Randy Perlow (ColorDMD), Andrew Heighway (Heighway Pinball), Brendan Bailey (pinball design in Future Pinball) and the Jersey Jack seminar. Later in the evening I ran into JJP programmer Keith P. Johnson and Jack Guarnieri in the tournament area. As I interviewed both of them recently I asked them to stand on a table to take some pictures against a white backdrop. Keith only got on a chair, but Jack was happy to climb on the table for me 🙂 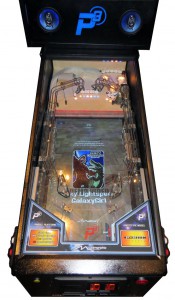 In between things I took some photos of unusual games in the free play area, tournament area and the vendor hall. Unfortunately, especially for a pinball event, lightning at Expo is terrible. Lots of reflections from the lamps in the ceiling. In the vendor area I played the prototype playfield of Multimorphic’s Lexy Lightspeed: Galaxy Girl. The playfield of this game is designed by Dennis Nordman. The game is unusual in several ways, besides having this huge LCD monitor as part of the playfield. There is no shooter lane. When the ball is launched it’s brought in play via one of the two ramps, which brings it to the flippers. That works, but it is something to get used to. As this was just a flipping “whitewood” there were no rules or anything applied to it. Also two shots on the left had no direct use as they were both stopped by a wooden block. Most likely some device will replace the wooden block later on. While being a very innovative game in terms of technology, the lack of rules and shots gave me the feeling the layout is in need of some more variety. Obviously with the wooden block replaced and possibly the use of stand up targets and/or ball catching devices at the top of the monitor, gameplay will change heavily. I’m looking forward to see what this game will develop into. 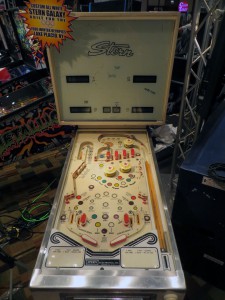 Besides offering 4 Metallica‘s and 4 Star Trek Pro models, Marco Specialties also had a special “white” Stern Galaxy game on display. Apparently there were 8 of these made for the Olympic Wintergames of 1980. Later on the game was playable.

Besides all this I met lots of people and received many compliments about Pinball Magazine. I’m glad to hear so many appreciate the high quality format of the publication. Just like the night before the free sample magazines needed constant refills as so many people took a copy. Again, just like the night before, Pinball Magazine also offered seasonal Dutch candy (described as little gingerbread cookies) on the flyer table, which also needed frequent refills.

Around 2:00 AM I decided to call it a day, realizing I may have to skip the early seminars on Friday morning. Luckily Martin Ayub of Pinball News is doing a great job in reporting live from the seminar floor and will host recordings of all seminars. So I can listen at a later time to the seminars I missed out on. More reports from Expo later today, or tomorrow.

Friday will an interesting day as it looks like I will sell the last remaining copies of Pinball Magazine No. 2 I brought with me. Luckily the magazine is still available in the Pinball Magazine webshop, so who can’t get hold of a copy at Pinball Expo can still order a copy online.