The First day of Pinball Expo usually is only an evening since nothing happens until the Bumper Blast Welcome Party. I aarived at 7:00 PM at the Westin, which at that time already had lots of Expo visitors being present. The nice thing about Expo is that you (I) see a lot of people that appreciate Pinball Magazine and come over to tell me. 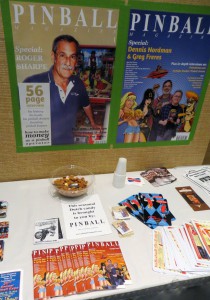 After picking up my registration stuff I put up some posters of Pinball Magazine No. 1 and 2 and distributed the first copies of the sample Issue that was made for this event. To my surprise I think about 300 copies were picked up during the first evening. I also introduced some seasonal Dutch candy which turned out to be be very popular too.

The evening itself was just great. Catching up with people I met last year, or see more regularly. Like Rob Berk said in Pinball magazine No. 2, “Pinball Expo is like a love in.” I had a great talk with Multimorphic’s Gerry Stellenberg about their P3 platform and upcoming games. I think the platform is great and may even be the future of pinball. All it needs to take off is a great fun game.

Gerry and I went for a drink at Twin Peaks, a Hooters-like type of restaurant/bar. To be honest it was a good thing I new what type of bar it was, else I might have thought it could have been a gay bar based on the number of male (and lack of female) visitors. For a moment I was also wondering why one of the waitresses had her boobs lifted into her armpits, but if that makes her happy…

When I returned to the hotel I ran into ColorDMD’s Randy Perlow. We had an interesting, lengthy discussion and I eventually was able to sleep for four hours before getting up in time for the Stern factory tour the next morning.