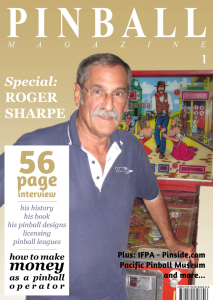 The sub menus, as well as the links below indicate what some of the the content of the first issue of Pinball Magazine is like.

Links to fragments of articles:

Video section for issue No. 1

Typos in the first edition of issue No.1

Link to the website of the Pacific Pinball Museum