Welcome to the website of Pinball Magazine, the new, in-depth, glossy printed publication dedicated to pinball and the people behind it!

The magazine was launched in August 2012 and has been a huge success with pinball fans around the world; Issue 2 is shaping up to be even better. New issues of Pinball Magazine are published two or three times per year, and instead of offering a subscription, each magazine is sold separately. 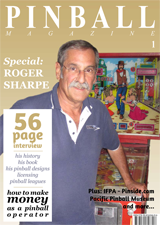 The first Issue of Pinball Magazine also features articles on:

and much, much more!

As a fellow pinball enthusiast we invite you to take a look around Pinball Magazine’ website. You’ll find  samples from  Issue 1, as well as a free interview with Jersey Jack Pinball’s animation artist Jean-Paul de Win, and more. And if you want to get your hands on a copy of Pinball Magazine we’ve made it quick and easy to buy one from anywhere in the world : just head to our online store and order a copy right away. Issue 1 is still available, and Issue 2, due out in June, will features an in-depth interview with Farsight’s Bobby King on the success and future of The Pinball Arcade.

Thanks for visiting, and keep on flipping!