The annual EAG show in London is this year held from January 22nd – 24th. Pinball Magazine editor Jonathan Joosten has been visiting the show for the past years and this edition is no exception. Below you’ll find his observations.

For those who have attended the EAG show before, this years edition may be a bit confusing as the show is held in an opposite hall in the Exxel building. Companies who has their stand for years on the same spot are relocated, which causes disorientated looks on some peoples faces. This years show should have some pinball highlights as beside the usual presence of the latest Stern game, it should also have the first public sighting in Europe of The Wizard of Oz by Jersey Jack Pinball, as well as the first presence of Heighway Pinball and their Full Throttle game on an industry trade show. Unfortunately, for reasons unknown to me at this point, the Heighway Pinball booth remained empty during day 1 of the show, but let’s hope they make it to day 2.

Stern distributor Electrocoin have three Stern games in their booth: two Avengers and an X-Men. The booth next to them also has an X-Men pinball machine set up, making it a total of four Stern games being displayed. All displayed games are Pro versions, the regular coin-up versions of the latest Stern models. For those not familiar with this term: Stern also produces a variety of Limited Edition and Premium versions of their titles with a higher price tag, as well as a consumer version of Transformers and Avengers games, which is called The Pin.

Representing Stern Pinball this year are Gary Stern, investor Dave Peterson and the recently hired new Chief Revenue Officer John Buscaglia. On the photo below Dave and John are posing next to the Stern games. 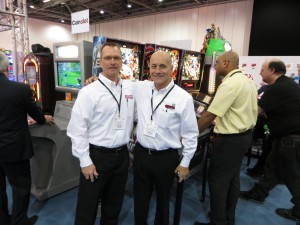 Jersey Jack Pinball is represented at the show by Pinball Heaven, the UK distributor of JJP games. JJP founder Jack Guarnieri flew in to make presence at the show, as well did the game’s Graphic Animation Artist Jean-Paul de Win, both pictured below. 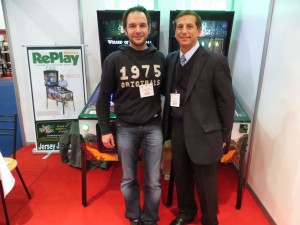 Phil Palmer of Pinball Heaven was also present to talk about the game. In the Pinball Heaven booth two games are set up, which were updated with the latest code, which is still being worked on at the moment. Having played the game previously at Pinball Expo in October of last year, there were several software improvements noticeable. The magnets in front of the witch are now functional during certain modes and the display shows a lot more animations than before. The flippers on both games felt very solid and all shots were easy to make. Both the ramp shot, leading to the Ball lock area and the playfield on the right, and the shot to the Vertical Up Kicker, leading to the mini playfield on the left, could be made with both flippers. As these shots may seem tight: they could easily be backflipped and even lesser speedy balls made it up the ramp.

As I did not play the game that much during Pinball Expo, it was surprising to me to see the variety of shots on the game and how easy they all could be made. The only shot that seems to be really difficult is the Skill Shot in between the popbumpers, which has to be made with the upper right flipper.

It was a pleasure talking to Phil, Jack and Jean-Paul. After the show we went to the traditional opening night party in the Fox bar next door. Martin Ayub of Pinballnews joined us, as well did Gary Flower, the UK correspondent of Pingame Journal. Both will be writing their own reports on the show, so do check out their websites for more news from EAG. 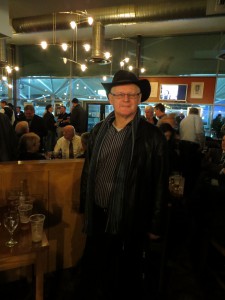 Gary Flower during the openingnight party

That’s all for now. Hopefully there will be more news to report over the next days, so do keep an eye out for that.