After a short night in which the refrigerator in my hotel room occasionally made more noise than a departing airplane, I got up early to finish yesterday’s blog, have breakfast and make it to the Westin in time for the Stern factory tour. While I was told my hotel does have a great breakfast, I guess that depends on someone’s definition of what a great breakfast is. The hotel’s free shuttle service took me to the Westin where I met JJP Graphic LCD designer JP de Win in the lobby in company of fellow Dutch visitors Bertjan Postma (Ministry of Pinball) and Gerard. While Expo had school busses arranged to travel to the Stern factory they preferred to travel by their rental car. Pinballnews’ Martin Ayub and Andrew Heighweigh (Heighway Pinball) also joined and the six of us headed for Melrose Park. 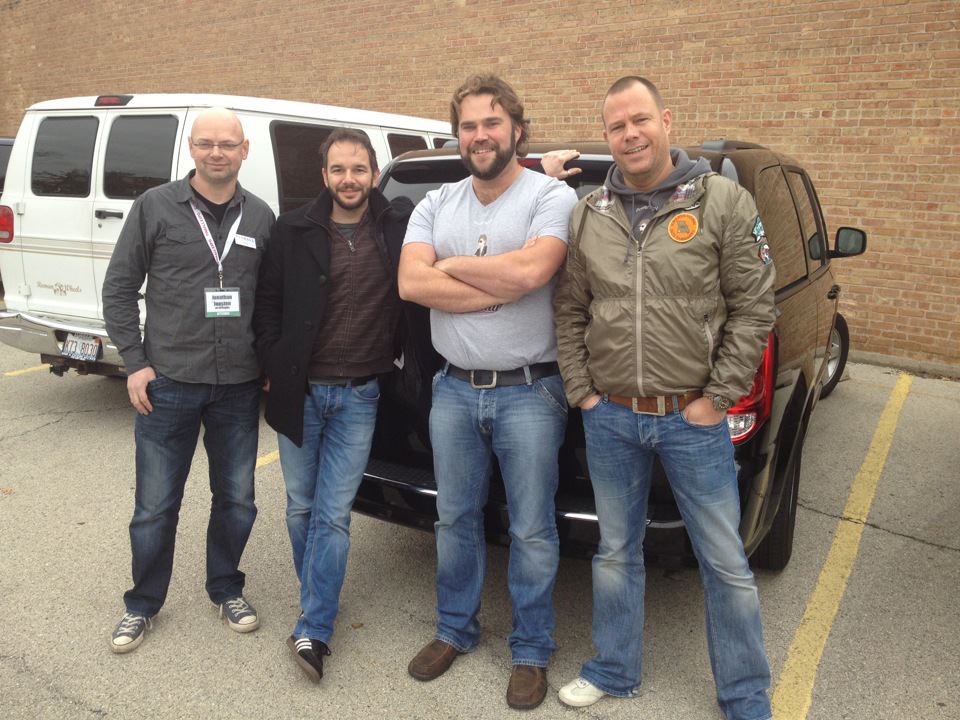 The Stern factory tour was nice. The few hundred attendees were split into groups of 10 and taken on a tour by a Stern employee. The first few groups were guided by factory personnel, and later groups were guided by known pinball designers and programmers. The tour itself maybe took about 20 minutes, but I was able to stretch that for myself by leaving the group and wonder around the factory floor by myself. I spotted pinball designer Steve Ritchie who was pleased to see me. He had gotten a copy of Pinball Magazine from fellow designer Greg Freres, only to have it taken back by Greg the next day to give it to Roger Sharpe at my request. At the time Roger’s copies had gotten lost in the mail and he still hadn’t seen what ‘his’ Pinball Magazine looked like. I promised to bring Steve a new copy on Friday, which he appreciated very much.

Speaking of Greg Freres: I spotted him guiding a tour. It was great to finally meet with him and I joked about him only working at Stern for just a few weeks and already guiding tours as if he has been working there like forever. Greg is a great guy and as he was guiding the tour together with Mark Weyna we could chat for a bit about the magazine to which Greg has been a wonderful contribution. After that I briefly talked to pinball programmer (and outstanding pinball player) Lyman Sheats. Very nice guy. He introduced me to Michael Gottlieb, who will do a seminar later this week. Since they had some catching up to do, I continued my route through the factory. In the Arcade corner they we’re shooting some photos or videos, which I later heard was apparently the reason why the George Gomez seminar that was originally scheduled for later that day got cancelled.

I sort of joined another group that was getting the tour only to step out again when I spotted a large dumpster with about 7 brand new plastic Tron ramps in there. I asked the Mexican factory workers if those were thrown away, which apparently was the case as there was something incorrect with the ramps. I asked if I could have one. They doubted it but to be sure I went to ask Stern’s Jody Dankberg. He also told me ‘no’ so I put the ramp back in the dumpster. Too bad as it would have been a nice decoration on one of my walls.

When the last group of visitors were about to leave the six of us got back in the car and drove to a nearby supermarket to do some shopping. Some of us were truly surprised by the size of some food products like sausages, steaks and other products. After returning to the Westin I borrowed my laptop to Andrew Heighway as his had some problems and he still needed to finish his seminar presentation for later that afternoon. After giving Andrew some brief instructions I joined Bertjan, Gerard and JP de Win at Rams across the street for a true American hamburger. Gerard had one about the size of his head. I took a more normal sized one, which I felt was large enough to allow me to skip the next meal. But it tasted great 🙂

I made it back to the Westin in time to see the seminar of Antonio Ortuño from Spain. Antonio is the designer of Captain Nemo, a limited to 30 units pinball machine with a flatscreen mounted in the playfield. While his story was interesting, I was hoping to see some video of what the animations on the screen would be like. But he didn’t show any. He did hand out flyers of the game at the end and I am happy I got one 🙂

After the seminar I visited the booth of Pinball Classics and had a nice conversation with Mark Czarnowski. They have some great products on sale like customized shooter rods. Do visit them if you’re attending Expo. 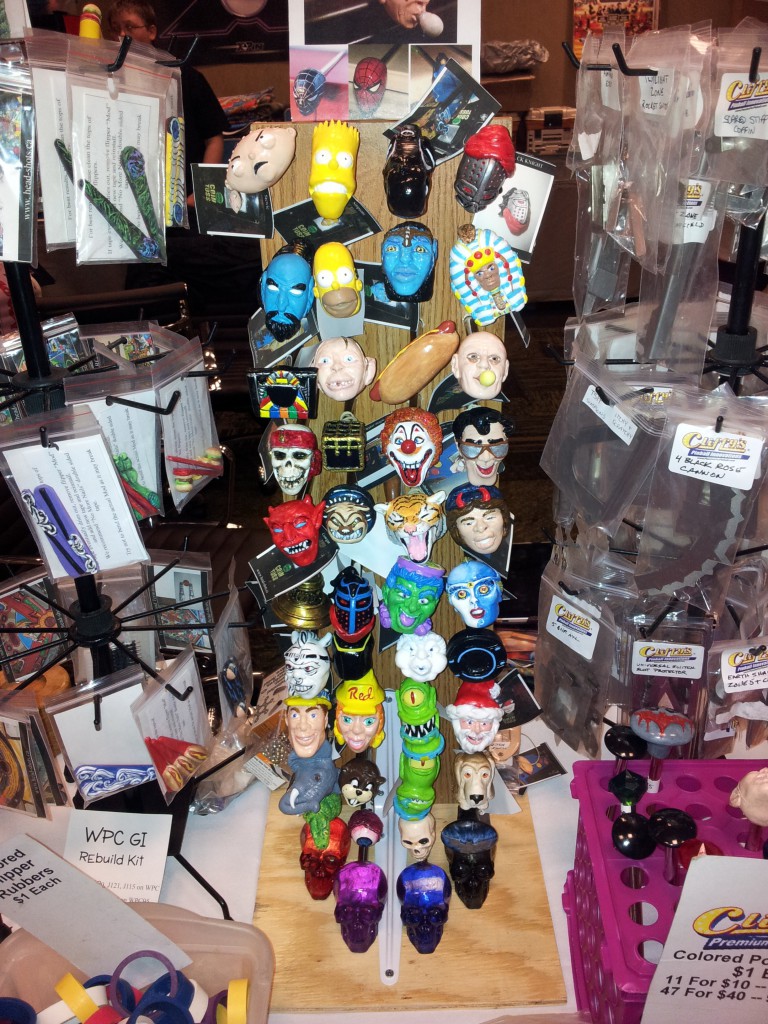 Walking around the hallway I spotted Roger Sharpe playing an entry in the Flip Out tournament. After he finished I walked up to him. The first issue of Pinball Magazine is largely dedicated to Roger’s life in the pinball industry, but so far Roger and I never met before. All interviews were done over the phone and we emailed a lot. So it was great to finally meet Roger himself. Just as during the interview Roger was very nice and friendly. He had broken his thumb last weekend, but apart from that he was doing great. He was impressed by how the magazine had turned out, which is always nice to hear. Especially from the former editor of GQ Magazine. 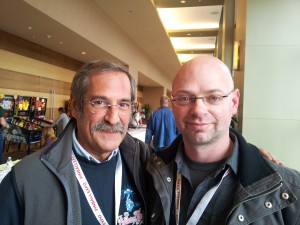 I attended the “Behind the scenes” seminar by Mark Bakula and Don Caldwell. They showed some videos of interviews with pinball designers / artists in their game rooms and followed that with a trivia quiz. At 5:20 Andrew heighway did his presentation and now publicly revealed he decided to retheme the Circe’s Animal House game into Full Throttle, a motor racing theme. He showed renderings of what the playfield will look like with some innovating new features. He also had a second big announcement: pinball designer John Trudeau will be working with them. You can read all the details on Pinballnews.com.

By the time Andy finished his presentation the exhibit hall had finally opened. I went to take a look and was complimented on Pinball Magazine by former NBA player Todd MacCulloh. Todd has a large collection of pinball machines and even hosted this year’s IFPA 9 championships at his house. Continuing my round on the exhibit floor JP de Win introduced me to Jack Guarnieri of Jersey Jack Pinball. Jack and I have had some talks in the past and it was great to finally meet him in person.

A few booths further I met pinball designer Dennis Nordman who is showcasing the Whoa Nellie! Big Juicy Melons pinball machine together with Greg Freres. I had a very nice talk with both and finally got to play the game as well. It truly is a fun game. Fast action and merciless: no ball saves and a gobble hole in the middle of the playfield that equals an instant ball drain. While they only made 4 units of this game, there are looking at perhaps doing a more commercial run, which I think would be great.

After that I went to see the Jersey Jack Pinball fireside chat. Jack introduced all present members of his team and did a long Q&A session. While it was very interesting I had a tough time staying awake. After the fireside chat t-shirts were handed out and people stood in line to play one of the 2 present Wizard of Oz games. I felt so tired that I didn’t even get inline. I had a nice talk with Al Warner who I already met on day 1 and then continued my round on the exhibit floor. While not feeling like being able to play pinball very well I did play the Skitball Predatorgame and managed to score like 232 million point on my first ball, which was apparently very good. The Skitball guys are fun and they have built a very nice playing game with interesting rules. 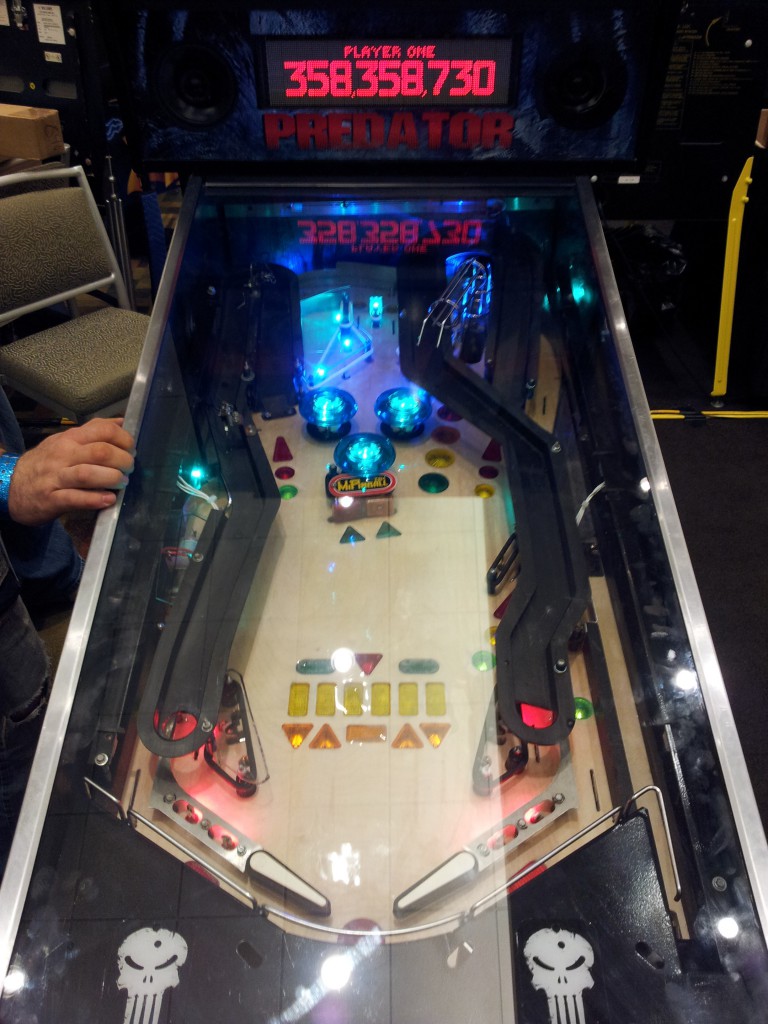 The Predator whitewood by Skitball. On the display Jonathan’s score, which seemed to be pretty OK.

I also got to play the P3 prototype by Gerri Stellenberg and again had some very good balls in play. I complimented Gerri on his innovative design. The game plays very smooth and turned out to be more fun than I expected. However, by that time – around midnight- I had difficulty staying awake and noticed I hadn’t eaten anything since lunch. So I headed back for my hotel, turned off the refrigerator and finally was able to get some sleep. Day 3 will also be very interesting: lots of interesting seminars and dinner with the JJP team 🙂