Pinball Expo in Chicago is probably the most well-known Pinball show. It has been around for 28 years and usually has lots of pinball industry people walking around, doing seminars and stuff like that. I (Jonathan Joosten, editor of Pinball Magazine) have often thought about going, but this is actually my first time actually making it. The upcoming days I will report about my experiences. In case my writing isn’t that well: that’s probably due to a weekend without much sleep, being up for over 24 hours. To quote Faithless: “Oh, if I could only get some sleep…”

Anyway, today was the day of flying in to Chicago. I was travelling with Bertjan Postma (Ministry of Pinball) and Gerard van de Sanden (who is the man behind The Matrix pinball which premiered two weekends ago at the Dutch Pinball Open). Right before getting on board Andrew Heighway of Heighway Pinball turned out to be on the same flight as well. Very nice 🙂

Somewhere at 11,000 feet (or was it 11 kilometres) above the ocean Andrew showed me his latest developments regarding his Circe’s Animal House pinball game. I’ve played the whitewood of that game at the UK Pinball Party last August, which was the show where Pinball Magazine was launched. That whitewood played very fast and smooth. After getting feedback from people at the show, including pinball designer Mark Ritchie and yours truly, Andy and his team made some changes. I’ll leave it to him to reveal them at his seminar, which is tomorrow at 5:20 PM, but I recommend all who can be there to be there. I got very excited about the changes that have been made, of which I actually suggested some 🙂 Bertjan and Gerard joined Andrew and me in the centre of the plane and while it was not allowed to get together in such way, the crew was very patient with us 🙂

Once we got at the Chicago O’Hare airport Andrew Bertjan and Gerard went to rent a car. I got instantly ‘robbed’ when I converted some European currencies for dollars. In total I must have gotten 100 dollars less than if I would have changed the currencies at home. Only to find out there was an ATM in my hotel lobby. Grrrr. The cabdriver was also kind enough to double charge me. Great! After a quick powernap I was off to the Westin. The good news: my hotel provides a shuttle service, so that ride was free 🙂

After registering at the front desk I briefly talked with Pingame Journal editor Jim Schelberg. Jim has been a great help in the making of the first issue of Pinball Magazine, providing photos of the Sharpe family. We never met of spoke on the phone, so it was nice to briefly talk. As Jim was busy I went on and took a look in the exhibit hall where just a few vendors were building up. In the room behind that the Chicago pinball Mafia Phoebe James and possibly others had set up a bunch of really nice looking games. I tried to play a few but soon ran into John Kosmal of the Michigan Pinball Expo. Then I had a long talk with Dan Loosen, who is featured in the first issue of Pinball Magazine. During that talk pinball designer John Popadiuk walked up to me. John and I have never met before and it felt kind of funny to be recognized by him.

As this was my first American pinball show, I noticed the room for pinball machines on free play was about 1/3 of the exhibit hall with vendors. The shows in Europe I have visited usually have less rooms for vendors and often more games to play. I was very happy to spot a Joust pinball from Williams, brought in by Phoebe James Smith. I had only seen photos of the game and I was very interested in playing it. 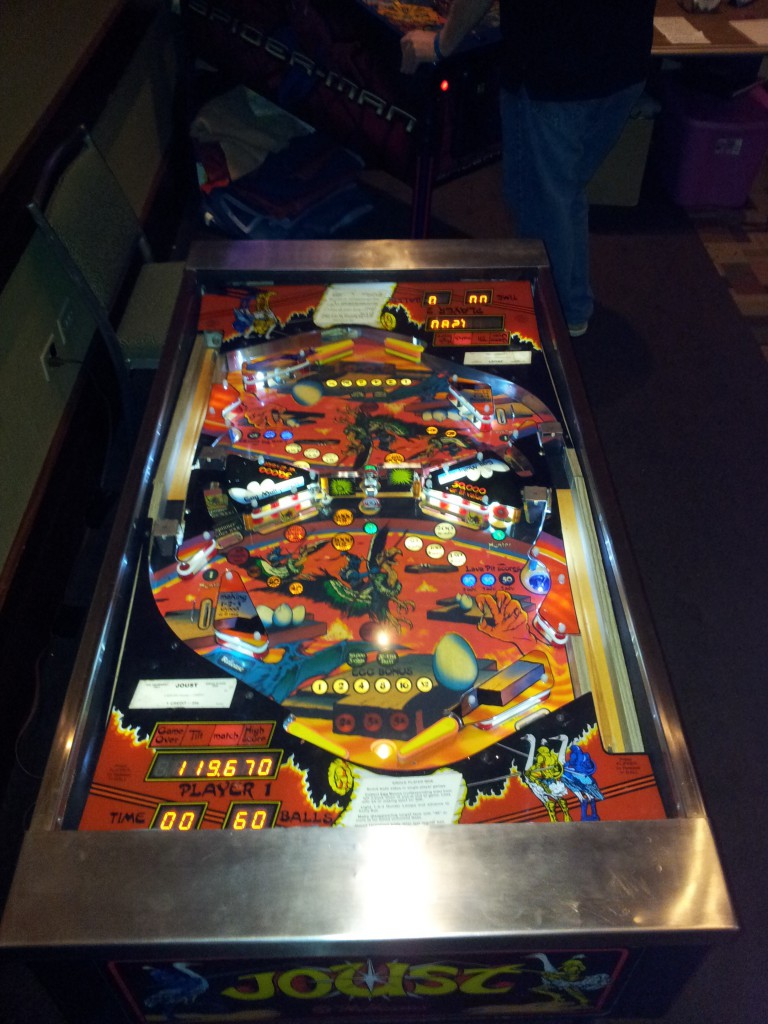 I also played a very nice looking Hopus Pokus, which I had never seen before. I took some photos of other games and found them to be looking great.

There was a buffet arranged with some sort of Italian food, which was very nice. I was in the company of the lovely Tina Curtis, who beats me time after time on Songpop. Always nice to meet someone in person. Voice actor Fred Young, who features with his voice in 34 pinball machines, was walking around doing his impressions, providing some entertainment. I interviewed Fred years ago and (again) it was nice to finally meet. After briefly catching up with Pinballnews’ Martin Ayub I was recognized by a group of guys who turned out to be all Big Bang Bar forum members: Steve ‘Pinsane’ Tsubota, Al Warner, Marc Johnson and Fred Fyfe. It was great dishing up memories of the BBB production process and they all bought a copy of Pinball Magazine 🙂

In the pinball room I met two other guys who kept on making complements on the magazine, until everybody was requested to leave the room. In the hallway I encountered Trent Augenstein. Trent won the Dutch Pinball open in 2002 and the day afterwards played some pinball at my place. 10 years later his highscore on Scared stiff is still the Grand Champion score on my game. It was very nice to catch up with Trent. He’s running the Flip Expo tournament during the show and I may actually give that a shot in the upcoming days.

So long story short: I had a great time and met lots of great people. Tomorrow is the day of the Stern factory tour and the first seminars. Tell you all about it then.

PS: please note that the shipment of batch 4 of Pinball Magazine has been delayed. This batch will now ship after Expo. This does allow additional orders to be included in that batch.