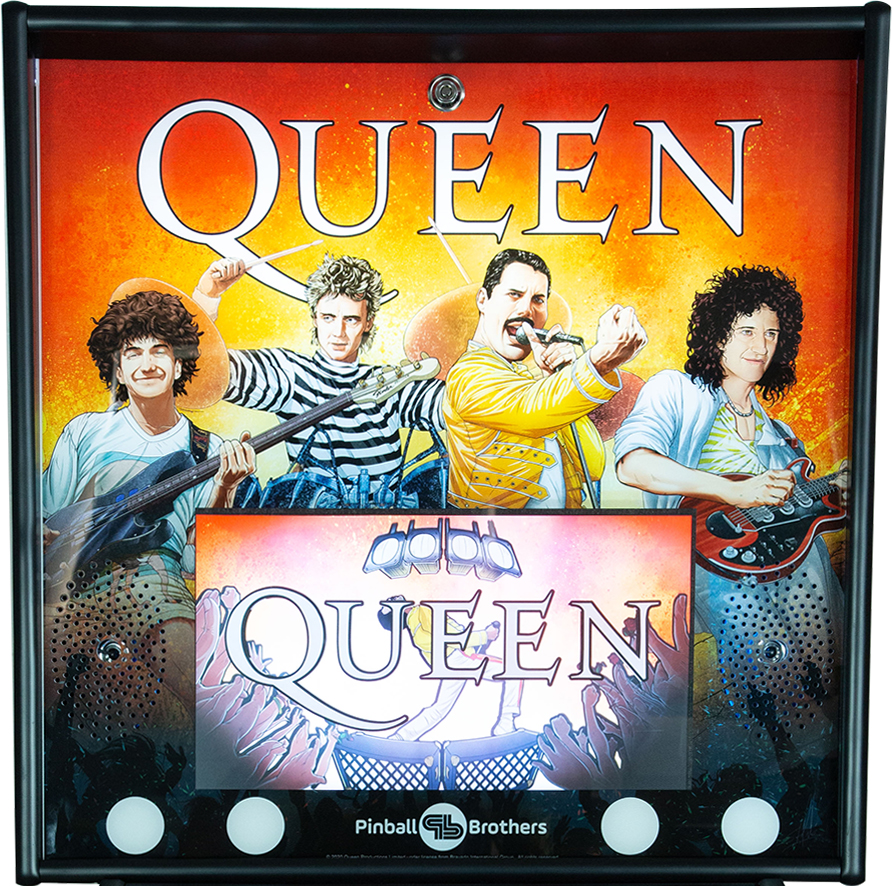 Backbox of the Champion Edition

Following a demo game displayed at a Queen pop-up store in the fall of 2021, Pinball Brothers and Queen have finally announced their Queen – Live In Concert pinball machine to go into production. There will be two versions of the game, a Champion Edition and a Rhapsody Limited Edition (1,000 units), of which the latter will become available in the first quarter of 2023. The game features 14 songs from Queen’s well-known Wembley live shows from 1986.

Here are the close up playfield images provided by Pinball Brothers: 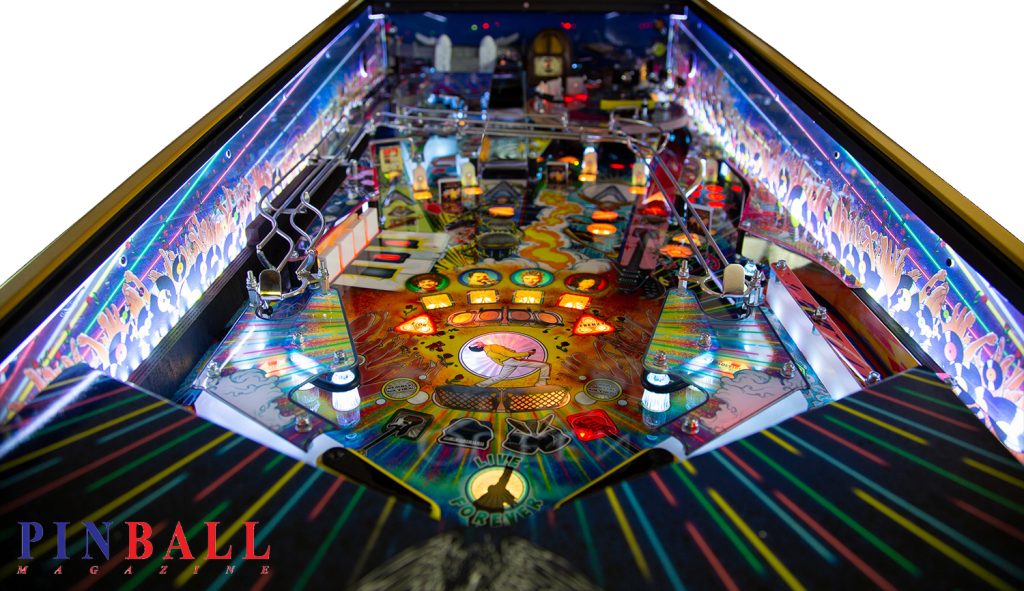 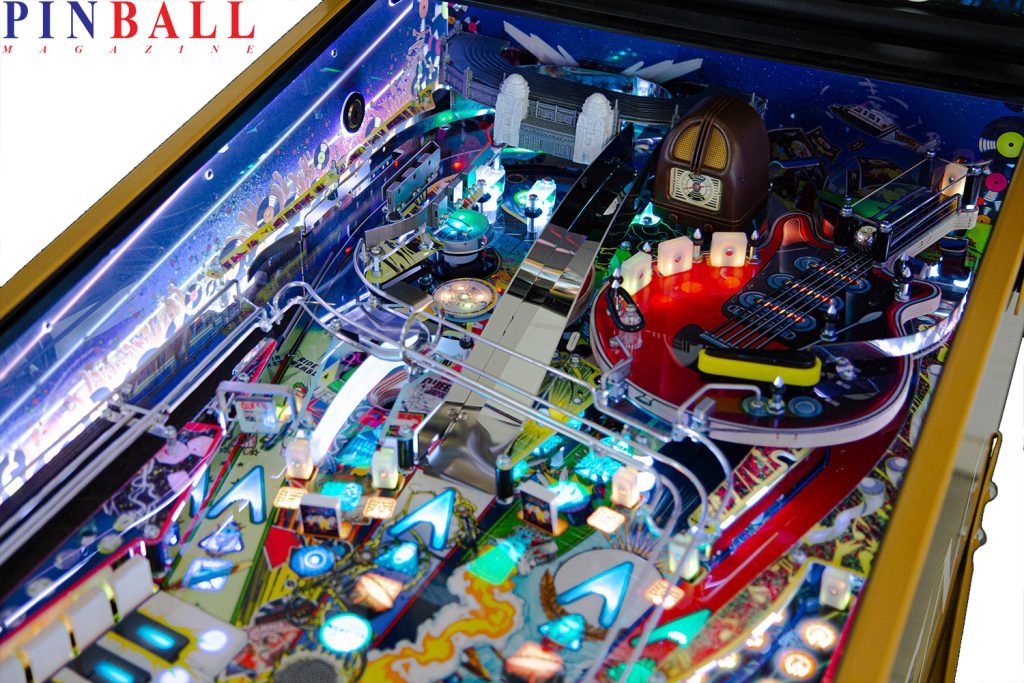 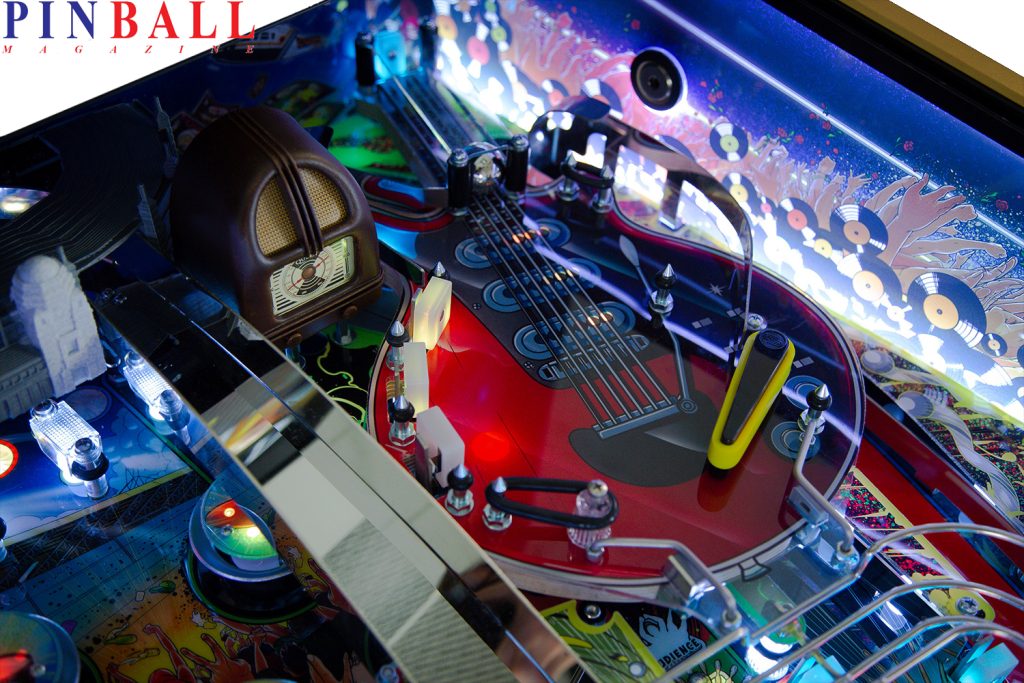 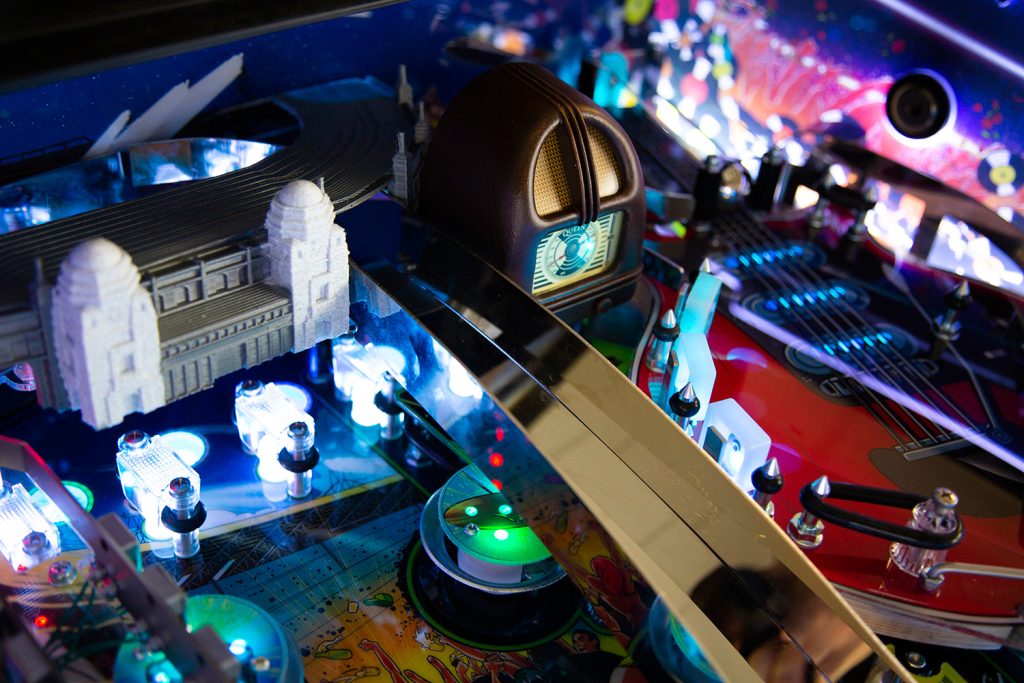 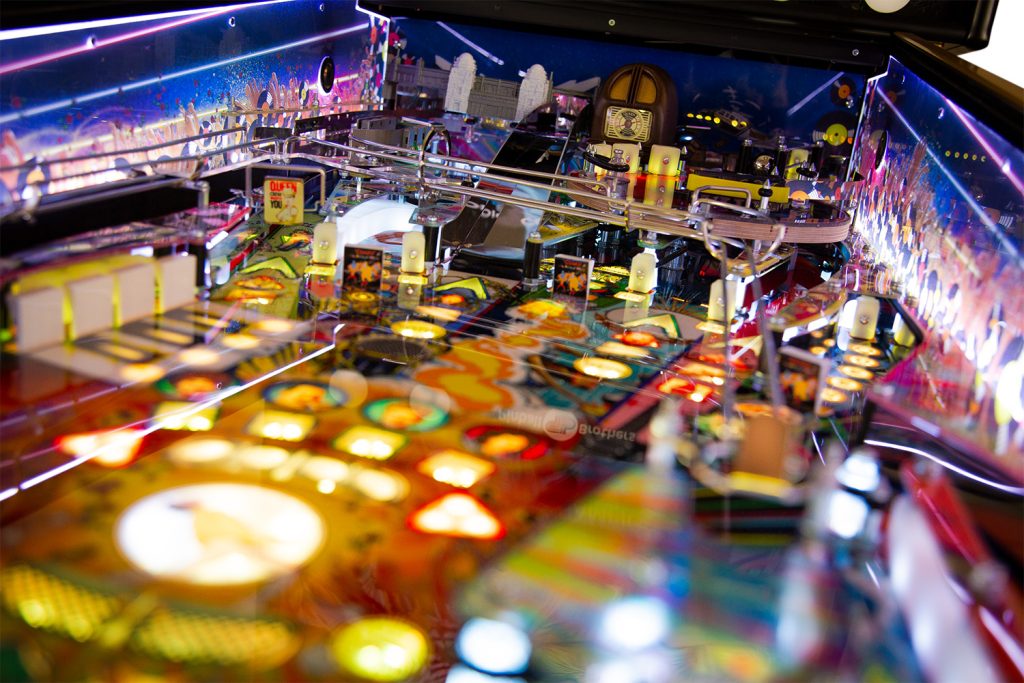 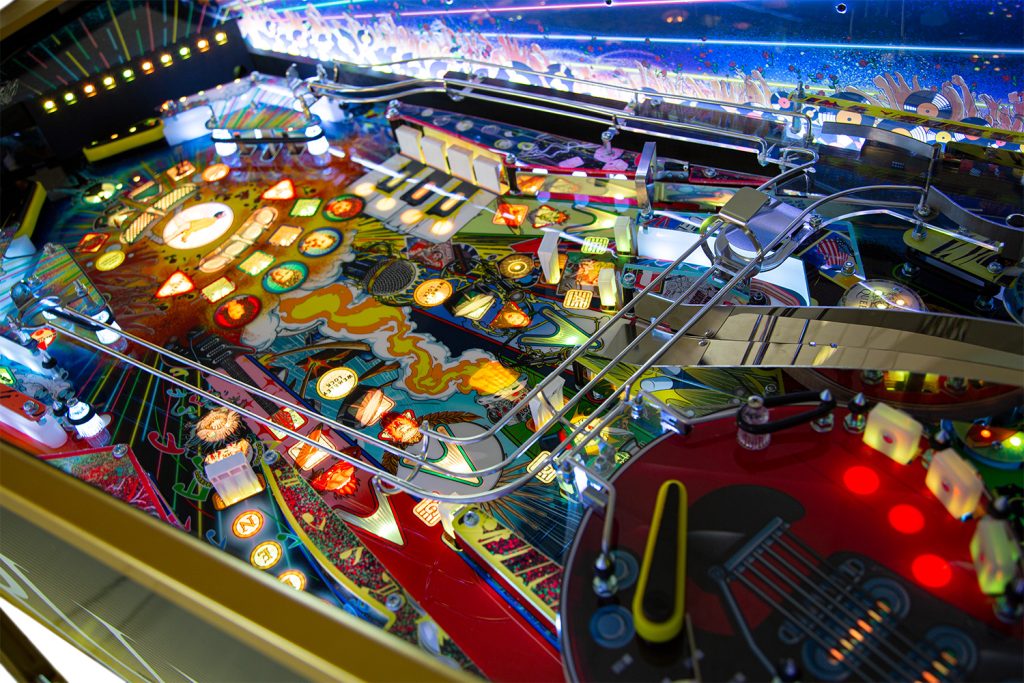 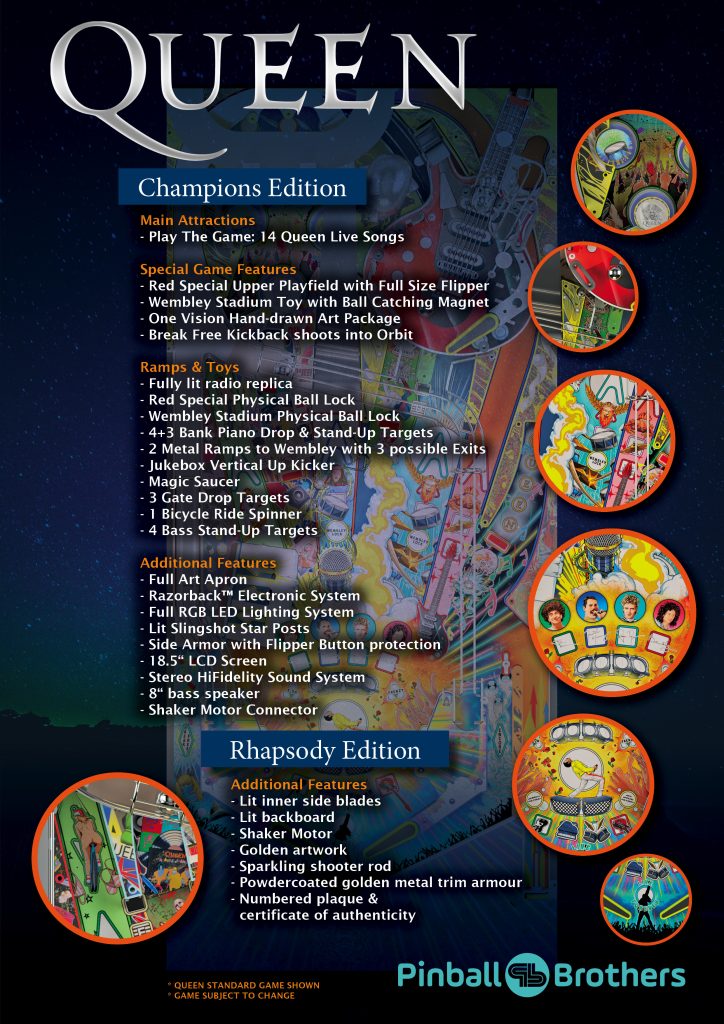 Based on these photos the game appears to have two flippers in the standard position at the bottom of the playfield, a thrid flipper on the Red Special miniplayfield, three popbumpers, three shot-blocking droptargets, a huge metal center ramp, elevated static radio and Wembley Arena sculptures, numerous stand-up targets and one spinner.

From earlier rumors it is understood the game was originally designed by Dave Sanders and Barry Oursler during the days of Heighway Pinball. At that time the game was developed as a widebody design. Now that Pinball Brothers have taken over, the game has been modified into a standard width game by the Pinball Brothers Design Team and Alexander Spohr.

The art package of the Rhapsody LE differs from the Champion Edition, as can be seen below: 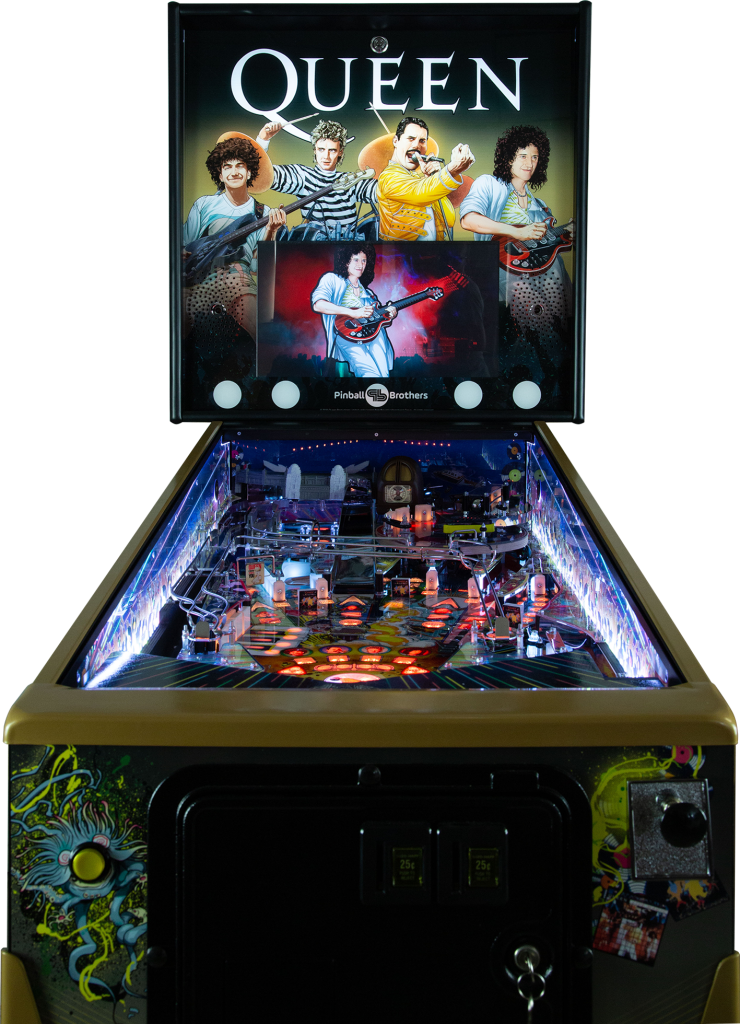 While the game is announced July 21st, 2022, production of the game will start in September 2022. As with Pinball Brothers’ previous title, Alien, production will be handled by Pedretti Gaming in Italy.

Below is the official announcement from the Pinball Brothers press release:

With over 300 million albums sold worldwide, the iconic British rock band Queen are one of the biggest bands ever. Formed in London in 1971, Queen have released 15 studio albums, toured extensively, and produced innovative film, video and theatre shows for over 5 decades and they continue to pull in the crowds around the world.

The time has now come to honour this legendary band with a pinball machine based on their truly spellbinding songs – all played LIVE!

We have worked closely with the band to ensure their approval and it features the following live songs:

Game Features
The game features 14 live songs accompanied by call outs by the band, exclusively recorded for the game.
Featured also is Brian May’s legendary Red Special guitar, in the shape of an upper playfield where you can lock balls to start the Red Special multiball. Or you can visit the epic Wembley Stadium to lock balls to start yet another of the game’s many multiballs.
Keep an eye on the Radio – it might help you time your flips! Collect autographs, instruments, band members, tour passes and posters on your way to eventually reaching the final wizard mode »I Want it All!«

The game is presented with a breath-taking full RGB light show and a HiFidelity sound system, including an 8” bass speaker. It is hard to imagine a better way of experiencing Queen live, whether it be at the club or in your own living room. It is truly immersive!

The Rhapsody Edition is limited to 1000 units and will be available through our global distributors.
The Champions Edition will become available in Q1 2023.
Pre-order through your local distributor today!

Tune in for the upcoming Pinball Magazine & Pinball News PINcast for more details about the Queen game.