August 23-25, the second edition of the UK Pinfest took place in Daventry. The location is a familiar one: the Mercure Daventry Court Hotel. This location also hosted the UK Pinball party for several years, so UK-based pinball enthusiasts know their way to Daventry. Contrary to last year, this time around the weather was very sunny and warm in temperatures. This also resulted in warm temperatures in the game hall, although outside it still was hotter.

The UK Pinfest is concentrated around one large conference room in the hotel, although there are some pinball related activities in the corridors as well. The entrance desk to start with, where also copies of Pinball Magazines were offered, as well as some other pinball-related products. In the corridor around the corner, Chris B had set up on Saturday morning, offering a range of mostly used pinball parts. Next to him, six electromechanical pinball games in need of restoration were offered for sale as well. 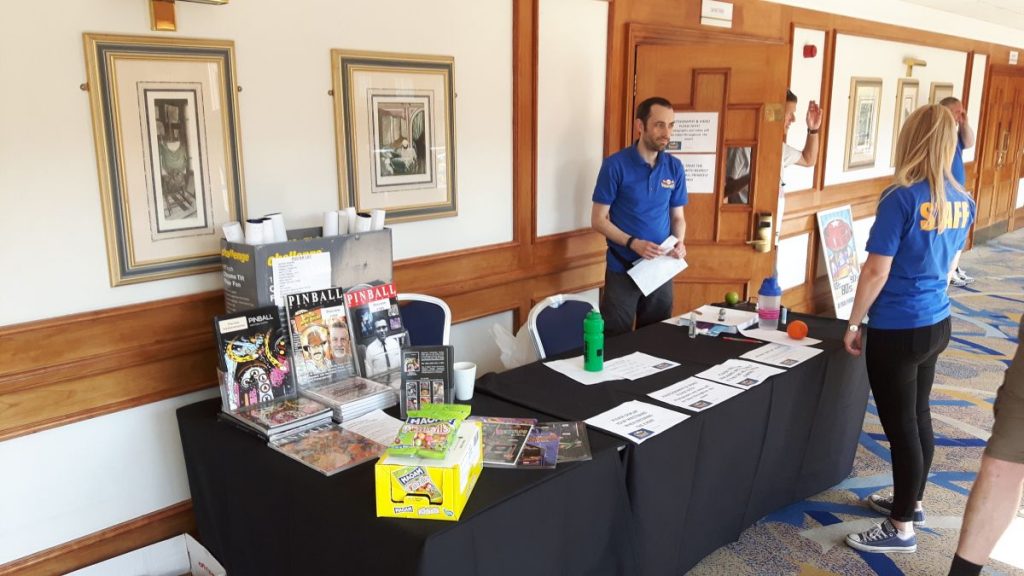 Inside the main hall were seven rows with about 90 pinball machines, of which two rows were reserved for various tournaments. The rest f the games was available for all to play for free, after paying the admittance fee. Entrance on Saturday or Sunday is £20, or £35 for both days. There’s also a special VIP package available, which includes access to the game hall on Friday and Saturday evening. 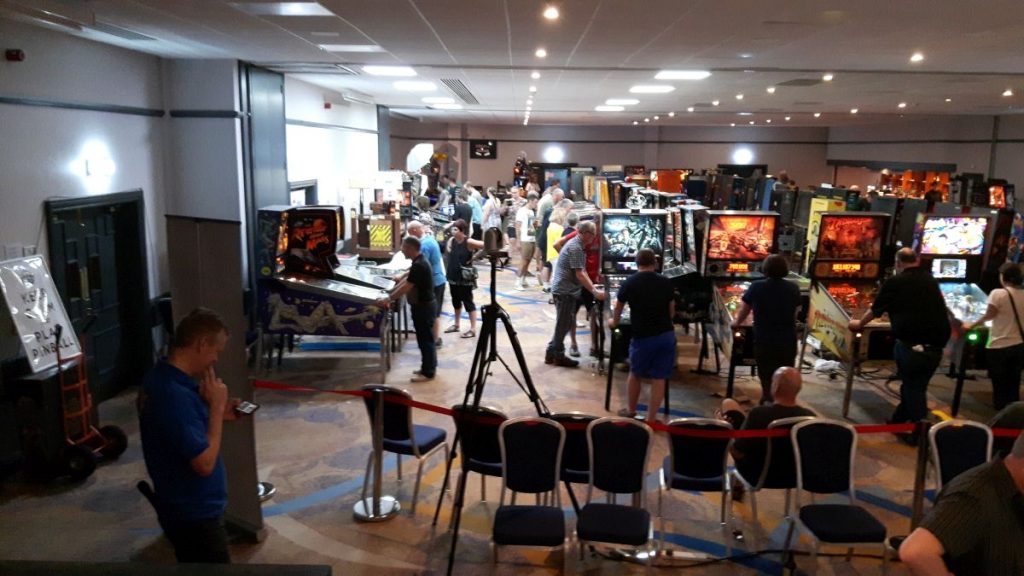 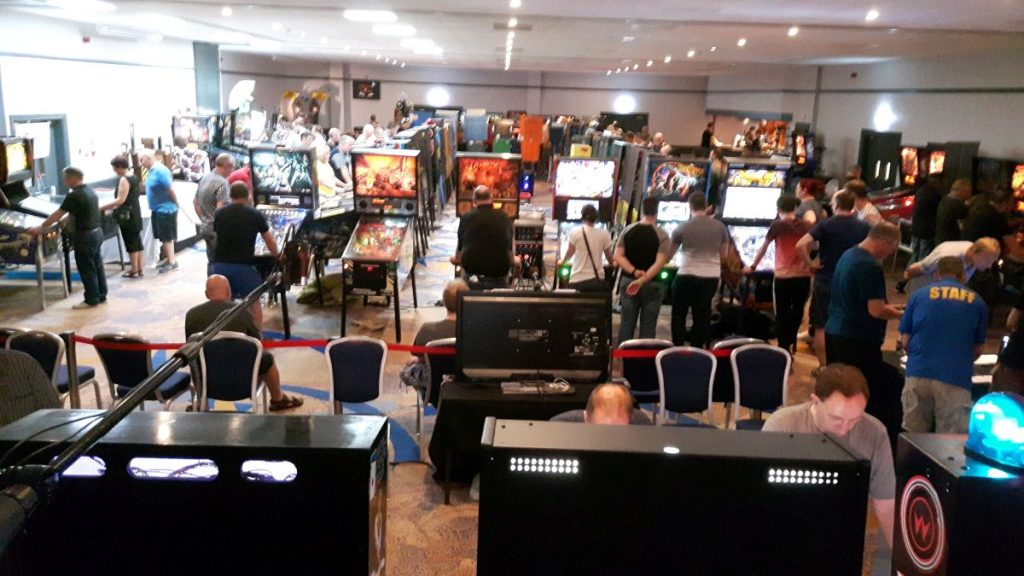 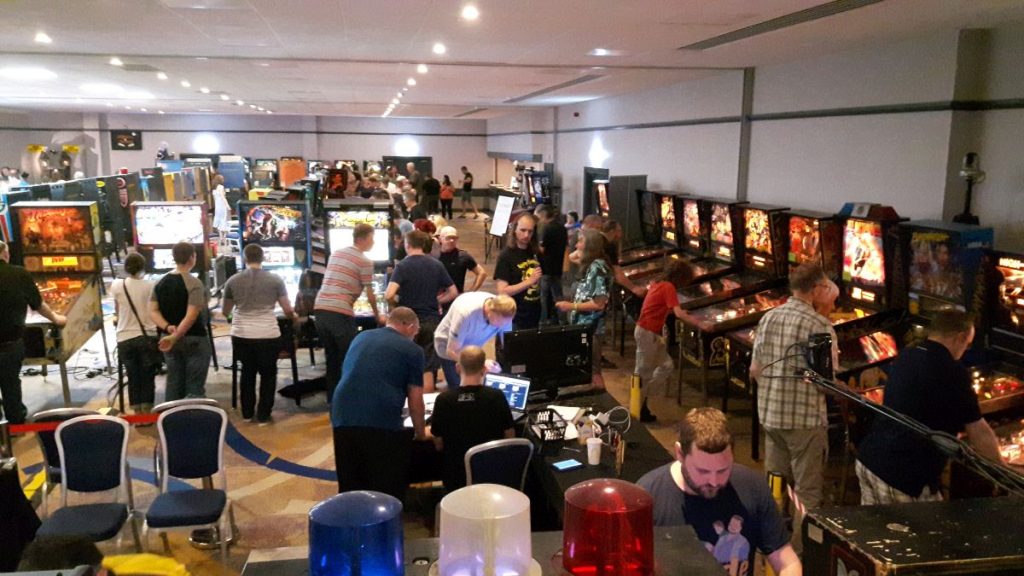 With most games set up Friday afternoon, the Friday evening session started at 7:00 PM. Around 8:00 PM, a Stall Ball tournament was organized, which was also video streamed by Neil McCrae. In this type of tournament, all participants line up, and the first one starts playing a game. In this case, the game was played on The Shadow. As soon as the player shoots the ball in a kickout saucer or another area where the ball is held up for a short time, the player steps away from the game to the back of the line, and the participant next in line takes over the game. This continues on and on. Whenever a player drains a ball, this player is eliminated. This ultimately results in one last player standing, who wins the tournament. Over 30 people were participating on Friday evening, and the same tournament will be held on Saturday as well. 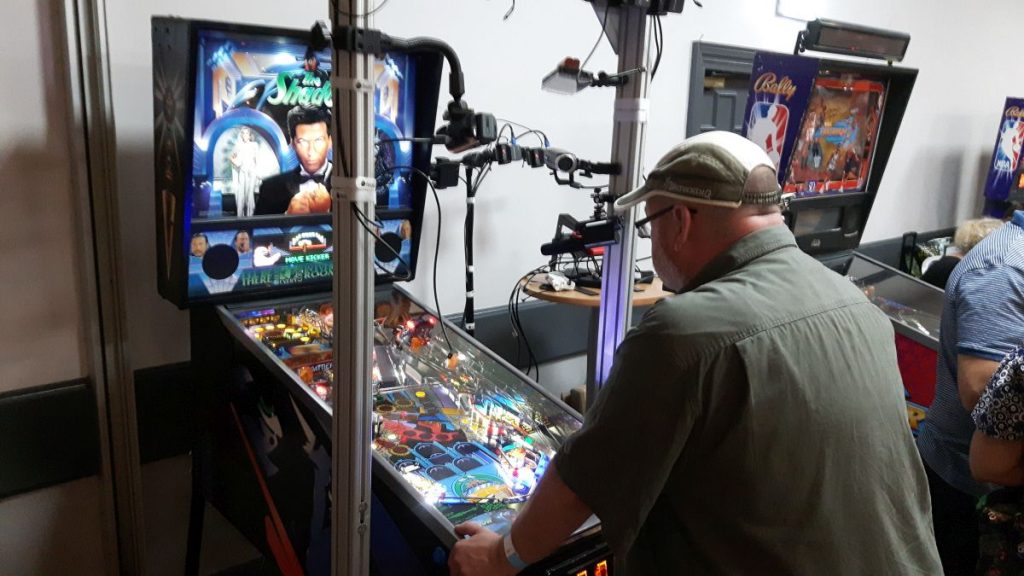 All games at the UK Pinfest are brought in by volunteers. The games on the floor ranged from a few electromechanical ones, including some rarely seen Zaccaria single-players, more familiar solid-state titles up to Stern’s Black Knight Sword of Rage and Spooky Pinball’s Alice Cooper’s Nightmare Castle, which just made it into the country. 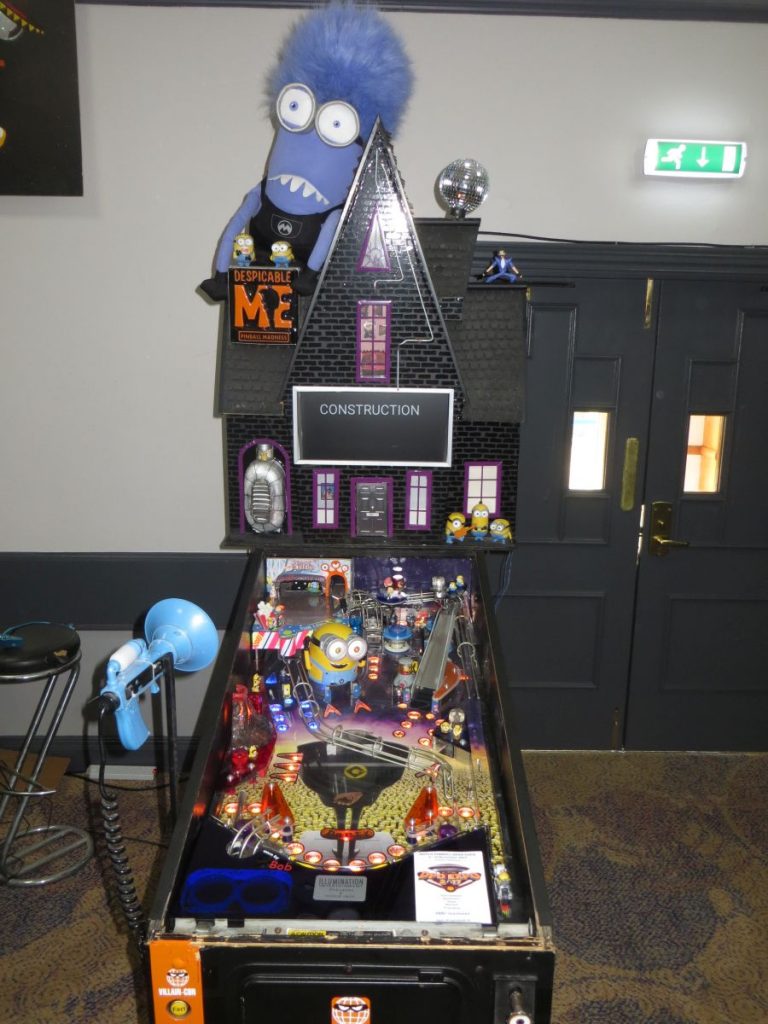 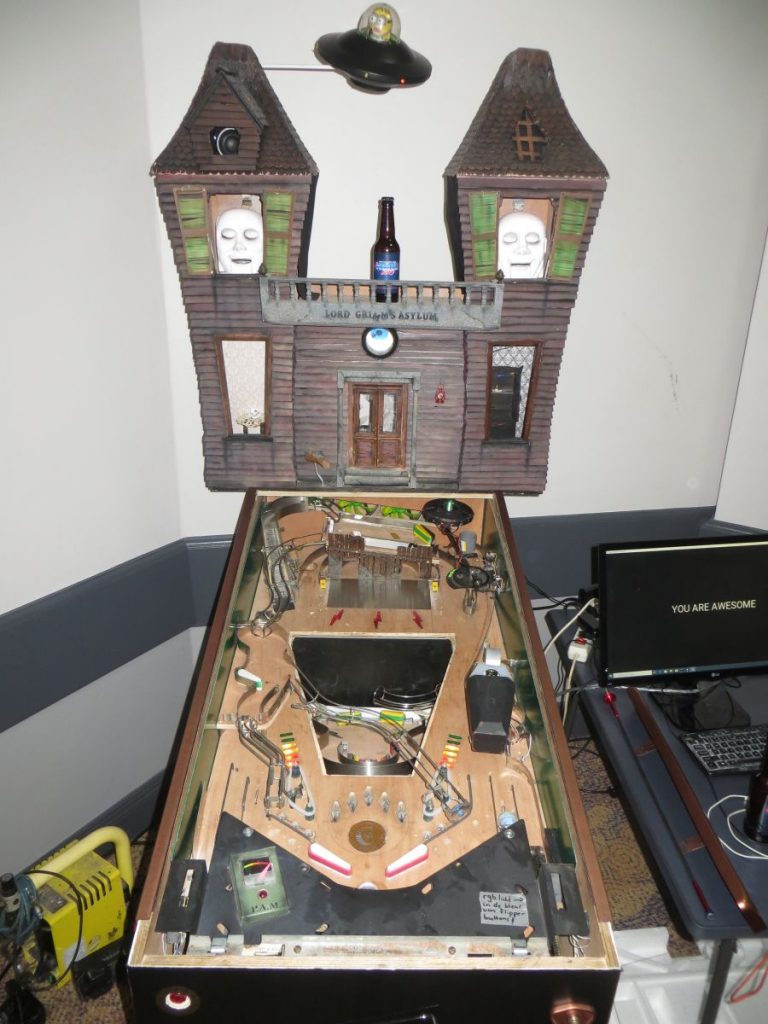 Some volunteers brought in some rather special games: the Pinball Amigos from The Netherlands brought their homebrew games Despicable Me and The Crazy Mansion. Both games are still works in progress, but interesting to take a look at as the way these are made is rather unconventional. The Crazy Mansion has a moving lower playfield, and the game even has a smoke machine connected to it, blowing smoke up the playfield. 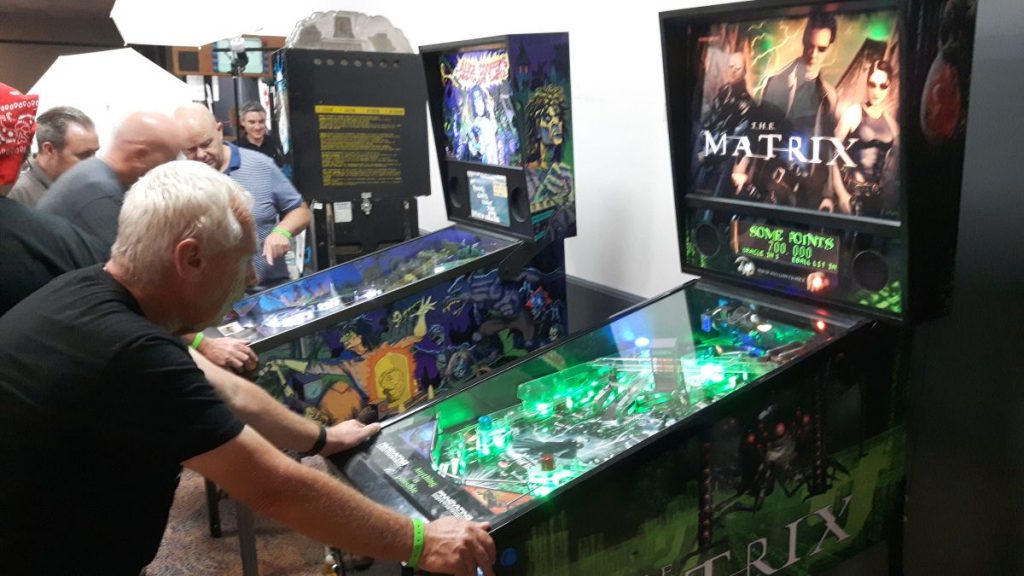 Ad Jonker, also from The Netherlands brought The Matrix, which is a retheme of Johnny Mnemonic. Only five of these games exist. 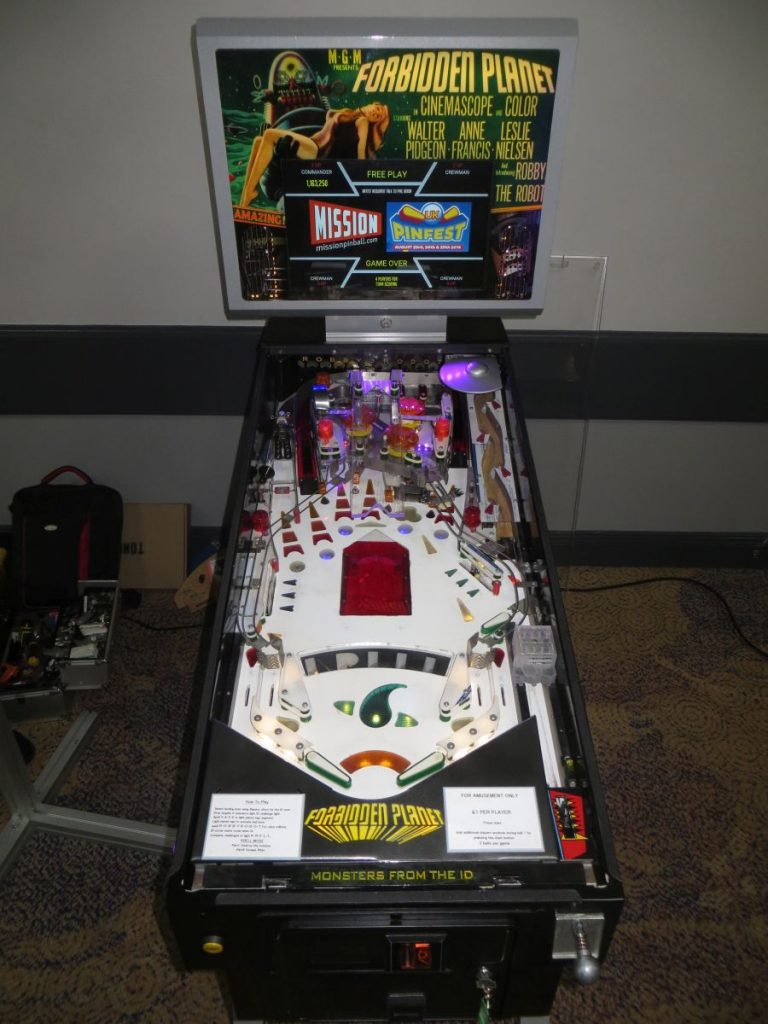 Phil Dixon brought in Forbidden Planet, a game built in the UK with some professional help in the design area. This game has a plexiglass covering the playfield that lights up around the edges. The game features an upper playfield with three pop bumpers, which is rather unusual. The game also has a hidden ramp shot in the center of the playfield. This shot can only be made when the entrance section of the ramp is raised from below the playfield. The ball then rolls along a plexiglass ramp over the upper playfield, where it is dropped at the top end of the playfield. For a homebrew game, it also has a very extensive service menu, which was demonstrated Friday afternoon. 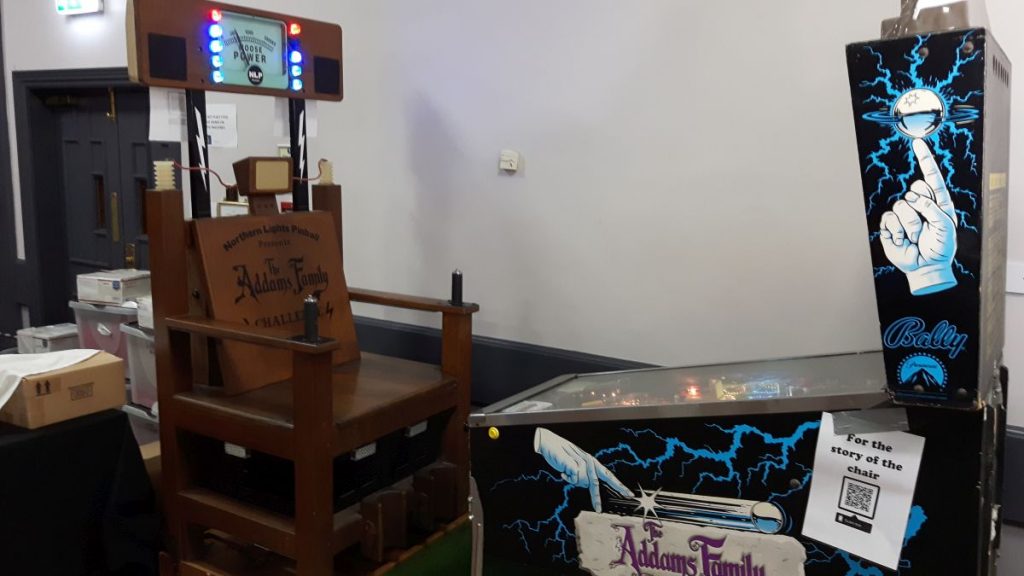 The Northern Lights Pinball crew brought in The Addams Family, which has to be played from an ‘electric’ chair. The two handles operate the flipper buttons. The chair interacts during gameplay by shaking, the handles vibrate as well and when scoring jackpots smoke comes out of the chair.

Saturday morning the show opened at 10:00 AM. There appeared to be some issues with the software the tournament was being run on, so all scores were registered manually.

Despite the warm weather, the show seemed to be rather busy with most of the machines being occupied most of the time. However, there didn’t appear to be any lines of people to be waiting to play a game. At the time of writing this report, early on the Saturday evening, the show seemed to be going smoothly and well organized. Pinball Magazine hopes to be back for the third edition next year.