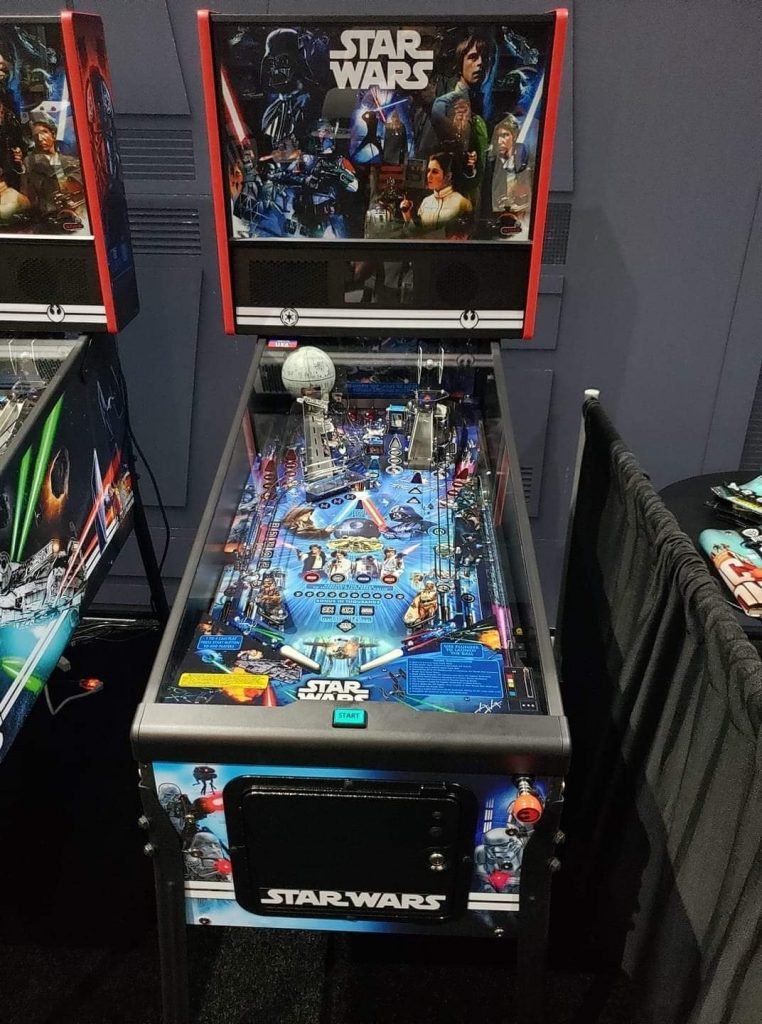 One of the first photos of the Star Wars home model, taken at the preview night of Comic Con (source: Pinside)

At the San Diego Comic ConStern Pinball revealed a new pinball model, aiming at the home market. See also the video announcement. The new Star Wars-themed game can be seen as a further developed version of earlier home models by Stern. Stern started with home models in 2007 with Batman Standard. They followed that model with a much more trimmed down apatation called The Pin, which was available in a Transformers and an Avengers model. The Pin itself underwent further development as well as the second iteraytion of that game had a backbox that was more shaped like a traditional backbox. Then the home  odel was upgraded even more, which resulted in Spider-Man home edition. Interstingly that model premiered the Spider-Man cartoon artwork, which was received very well (the artwork) that is lead to a Spider-Man Vault Edition with cartoon artwork. Also noteworty is that the playfield size of the Spider-Man home edition is only about two inches shorter than a standard playfield. This allowed the playfield to be placed in a standard Arcade-sized cabinet for the later developed Supreme game, which featured the same layout with different artwork.

The newest Star Wars home model is a further development of the Spider-Man home edition. The cabinet is very similar. The artwork on the cabinet is a combination of previous cabinet artwork used on Stern’s Pro, Premium and LE models based on the same theme. The translite in the home model is the same as the Pro model. A good eye would notice how Stern seems to have chosen to use the same translite, with the same dimensions, as on the Pro model. However, as the home model uses a much smaller display, the speaker panel appears to be unnecesary high, which is covered up with two white stripes on the lower part of the speaker panel. 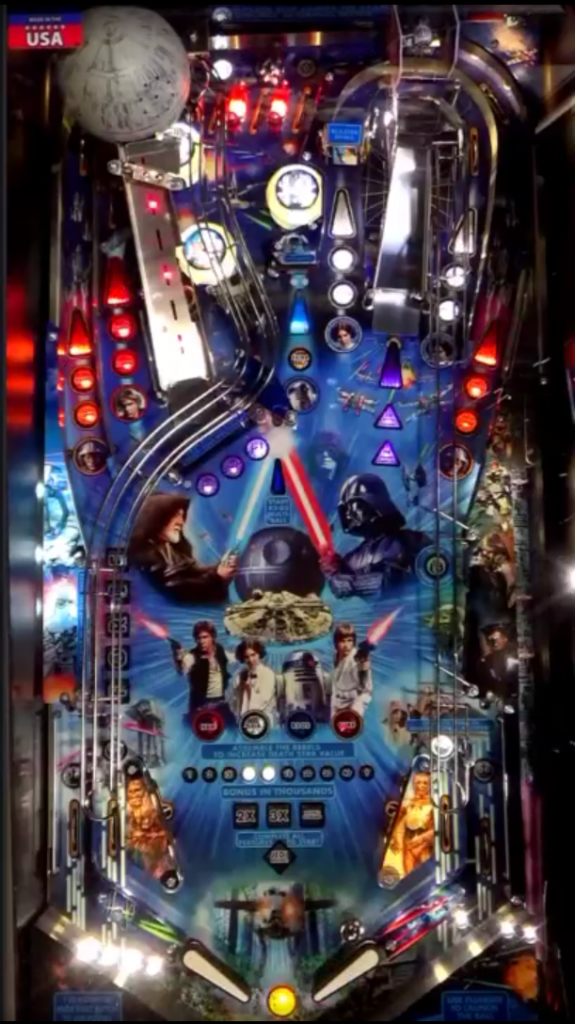 Top view of the playfield.

Since this is a home model it does feature a coindoor, but without coin mechs or the possibility to add these, although one can assume this can be achieved by replacing the entire coindoor. The playfield features artwork that is similar to the previous Pro and Premium Star Wars models. The playfield layout appears to be a further developed version of the Spider-Man home game with two metal ramps. The left ramp feeds into a Death Star toy and then via a wireform back to the left inlane. Contray to the Spider-Man home edition, Star Wars does feature a real plunger. The earlier mentioned display in the speaker panel appears to be of the same size as used in WWE Wrestlemania Limited Edition. The Spider-Man home edition featured a large color dotmatrix display, so this new display, albeit smaller, can be seen as an upgrade. 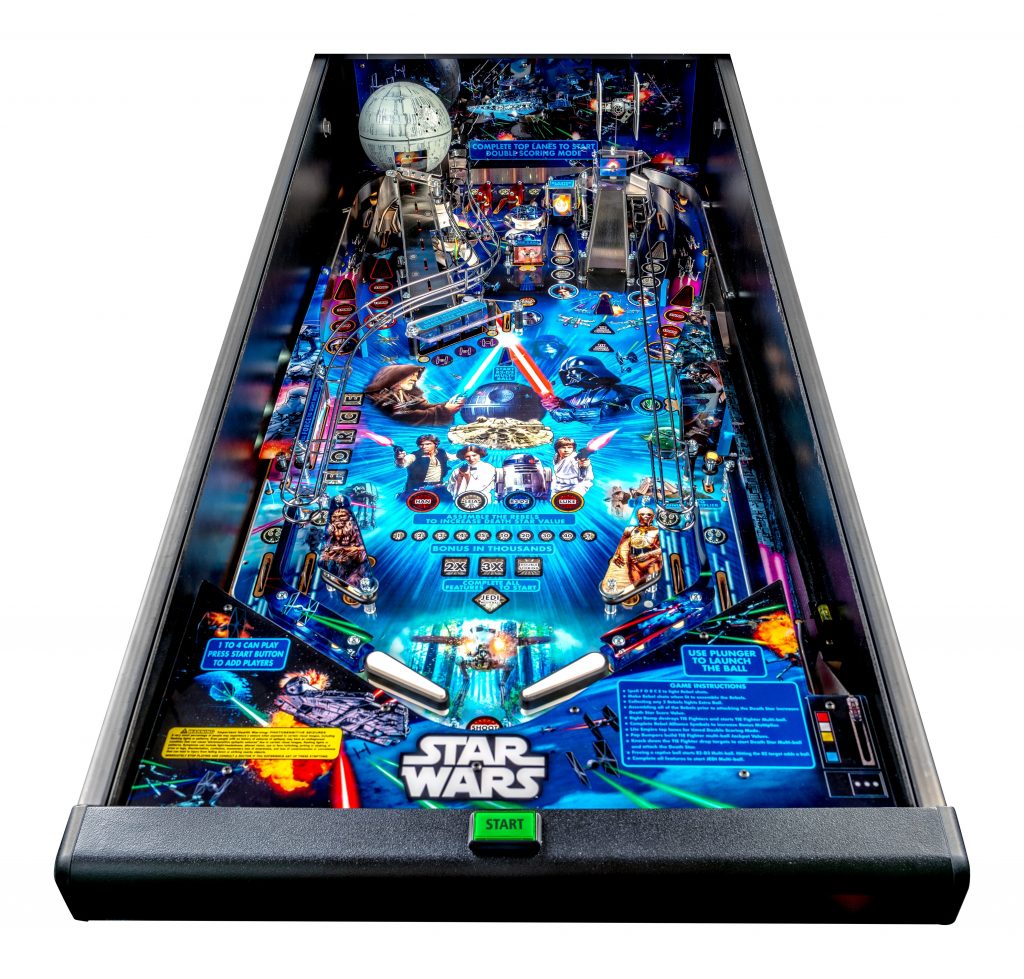 The playfield – a George Gomez design – features an 11-shot fan layout, two ramps, three popbumpers, three drop targets guarding the left ramp, a spinner, and the same static carry-over ball lock as used on the Spider-Man home edition right of the droptarget bank. Releasing the locked ball starts R2D2 2-ball multiball. Based on gameplay streamed by Jack Danger, the game appears to have a lot of flow, at least three multiball modes (R2D2, Tie Fighter, Death Star) and a timed wizard mode called Jedi Multiball. Object of the game is to complete all four characters pictured in the center of the playfield. Completing the FORCE targets on the left will enable the these characters and once a character shot is made, the player continues to complete that character by completing designated shots.

While this game may not be intended for the hardcore pinball enthusiast market, gameplay actually appears to be quite fun and entertaining. It may not be super deep in terms of rules, but there is enough in there to entertain novice pinball players with a game that will quickly teach them there are several diffrent goals to achieve in order to advance. The game streamed on the Deadflip Twitch channel is running on game code 0.62, which indicates there might be additional rules coming up if Stern decides to develop it up to version 1.0. at Comic Con six protoypes of the Star Wars Pin are present. Since all games are prototypes, Stern may decide to manufacture these game up to the demand for it from their distributor.

What is interesting about this new home model is that Gary Stern presented it to traditional Stern distributors in a live webinar earlier this week. Earlier models of The Pin were distributed through Costco and Amazon, but this game will be availeble through normal Stern distributors. While the game is not intended for pinball enthusiasts that prefer buying the real thing, this could be a nice addition to the various Stern models for an audience that aren’t looking to spend over $5K on a game. While none of the previous home models appeared to be big hits, it does make sense to launch this Star Wars home model at Comic Con. Chances are the hardcore Star Wars geek will be present and dressed up in cosplay, which could result in some interesting photos of Star Wars characters playing this new Star Wars game.

At Comic ConStern Pinball teams up with Nuclear Blast Records for the third year in a row, displaying several of their Arcade-sized models in their booth (#501). At Comic Con a special babyblue vinyl record with the soundtrack of Black Knight Sword of Rage will be available. This appears to be a limited edition of 100 copies only. However, chances are the same vinyl, possibly in a different color and/or sleeve could be available at other upcoming events.

Dead Flip’s Jack Danger is also present at Comic Con, representing Stern, in their pinball lounge at the Mariott Hotel. Jack will be streaming live of his Twitch channel and hosting tournaments every evening of the show where the best playing participants can win all sorts of Stern swag.

At the time of this writing it appears the Star Wars Pin is the only game Stern will be revealing at Comic Con. However, a new cornerstone title – available in a Pro, Premium and Limited Edition model – is also expected to be announced soon. Surprisingly, nobody at Stern was available to available to discuss more details about the game.

To receive monthly updates containing the most relevant pinball industry news, make sure to subscribe to the Pinball Magazine Newsletter in the right column of this website.

The easy to setup Star Wars™ Pin™ is built to last and engineered with genuine Stern commercial-quality parts.  The playfield is housed in a stylish cabinet with dynamic, high definition artwork.  The all-LED playfield lighting provides optimal color and brilliant light shows.

“The Star Wars™ Pin™ is designed to provide quality family entertainment and bring pinball fun to homes everywhere,” said Gary Stern, Chairman and CEO of Stern Pinball, Inc. “We are pleased to bring these pinball machines celebrating the Star Wars™ galaxy and adventures to our fans.”

Pricing and Availability:Manufacturer’s Suggested Retail Price (“MSRP”)*: $US 4,499*MSRP for sales to USA end-users, before any VAT, GST, Sales Tax, Duties, or other taxes.

The Star Wars™ Pin™ is available to pre-order now through authorized Stern Pinball distributors and dealers around the world.

Recent Stern Pinball titles include Black Knight: Sword of Rage, The Munsters, The Beatles, Deadpool, Iron Maiden, Guardians of the Galaxy, Star Wars™, Aerosmith, Ghostbusters, KISS, Metallica, Game of Thrones, The Walking Dead, Star Trek, AC/DC, Batman, and Spider-Man.  A broad range of players enjoy Stern Pinball’s games from professional pinball players who compete in high-stakes international competitions around the globe to novice players who are discovering the allure of the silver ball for the first time.  To join the fun and learn more, please visit www.sternpinball.com.

STAR WARS™ and related properties are trademarks and/or copyrights, in the United States and other countries, of Lucasfilm Ltd. and/or its affiliates. © & TM Lucasfilm Ltd.