Who’s Working On What? September 2017 recap

Rumor has it that Stern will not be revealing their next game (rumored to be Guardians of the Galaxy, designed by John Borg with art by Christopher Franchi) at October’s Pinball Expo. Reason for this decision would be to focus on the current Star Wars game, which is rumored not to be selling as well as hoped. However, this rumor may also be a smokescreen so that if Stern would be revealing their new title after all, it will have a bigger impact.

After being arrested last month (see the August 2017 recap) John Trudeau appeared in court Monday, September 18th. Details of what went on are unknown, but a new court date has been set for October 23rd.

Containers of Jersey Jack Pinball‘s Dialed In! arrived at JJP distributors in Germany and Australia. In the meantime, in the factory, the company had been building the Collector’s Edition of Dialed In!, which started shipping September 18th. Jack Guarnieri attended a pinball championship in Poland.

JJP’s fourth title – rumored to be Pirates of the Caribbean – has been announced to be revealed at Pinball Expo in October. Apparently, the game will be revealed Thursday, October 12th during the JJP seminar which starts at 8:30 PM. Buffalo Pinball announced they will be streaming the reveal on their Twitch channel. Afterwards five of these new games, as well as The Wizard of Oz, The Hobbit and Dialed In! will be available for the public to play.

Chicago Gaming has been building Medieval Madness remake and started shipping these games as well. The game is expected to be in production up to October 6th, after which they will switch the assembly line back to Attack from Mars remake. First thing on the agenda is building the Attack from Mars remakes that are destined overseas, although a container of Attack from Mars remakes also arrived this month at German Freddy’s Pinball Paradise. This production is expected to run for three weeks, after which the focus will be on building domestic games. Chicago Gaming plans to have shipped out all AFMr Limited Edition games before Christmas. Note that some distributors still may have a few LE games available.Following the production of LE games, the focus will be on Special Edition and Classic Edition games until the end of February 2018. 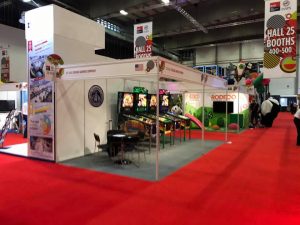 Chicago Gaming plans to start building the first samples of their third game early March 2018, which should be launched at Texas Pinball Festival that same month.

Doug Skor, Chicago Gaming’s Vice President of Business Ddevelopement, attended the Euro Attractions Show in Berlin as well where both remakes the company is making were displayed. At the show he was assisted by Anita Pika and Bernard Loose, representing the German and French disytributors. 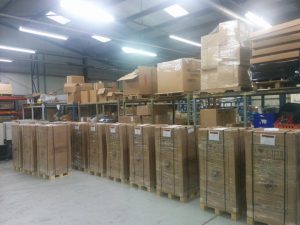 The company also posted two photos on Facebook of the first batch of 25 Alien games that were being built. Some were still waiting for final quality control at that time. One of the newly build games found its way to Austria where it was part of the Austrian Pinball Open.

Daniel Janson told Pinball Magazine things are improving nicely at the Heighway factory. Last week they shipped a container with 21 games to the United States. The first week of October another 25-30 games will leave the factory for Europe and Australia. Production of the Limited Edition Alien games is expected to start late October. There have been some important improvements made to the games up until the container left for the U.S. These improvements include a new computer, improved Xeno-mech and more. Customers with earlier pre-production games will be compensated with new parts or, depending on the build of the game, have an entire playfield swapped.

At Pinball Expo Heigway will be represented by their U.S. distributor CoinTaker. The new management will not be present at the show as there is still too much to take care of. The Alien game is also expected to be present at the European Pinball Championships in Sweden, the week after Expo. The weekend of November 11-2 the game will be present at Dutch Pinball Open Expo in The Netherlands, Pinball Universe in Germany and the Swedish Pinball Championship. A week later the game will also be shown at Video Giochi in Italy. 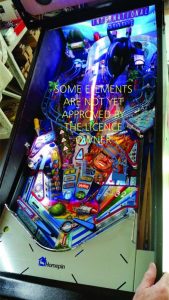 Homepin owner Mike Kalinowski attended the Vancouver Flip Out show and did a seminar as well on what he has been doing in pinball up to his upcoming Thunderbirds Are Go pinball machine. A video of this hour-long seminar has been made available on Youtube by The Canadian Arcade. The video shows a brief clip of the interactive topper of the game at the end.

Over the course of September Homepin has been teasing the Thunderbirds game with some photos and videos, but with no real details of the playfield shows as some elements are still awaiting licensor approval. Pinball Magazine received the playfield image below, which is the most revealing photo of the playfield currently available (click to enlarge).

Two complete Tunderbirds games did ship out to be displayed at PinFest Australia the weekend of October 7-8. After that, the games will be shown at the Pinball Warehouse on October 13th and the 14th at the opening of Pincadia in Wooloongabba. Mike will be present at all these events, and there will be a special offer for the game as well.

Spooky Pinball started the production and delivery of Total Nuclear Annihilation. The very first production game was delivered to Ed Robertson of Barenaked Ladies (interviewed about his passion for pinball in Pinball Magazine No. 3) by designer Scott Danesi and Dead_Flip host Jack Danger. Following the delivery, Dead_Flip streamed gameplay footage of the first production game live from Ed Robertson’s house. Both Scott Danesi and Jack Danger are scheduled to be featured in separate interviews in the upcoming fifth issue of Pinball Magazine. 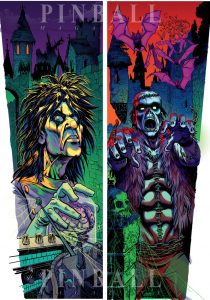 Spooky pinball was also featured in the latest issue of Rue Morgue Magazine! The article contained a little sneak peak on the backbox sideart of Alice Cooper’s Nightmare Castle, which Pinball Magazine is showing for the first time as larger images below (click image to enlarge). Special thanks to Charlie Emery for giving Pinball Magazine this scoop 🙂

Multimorphic sent out a newsletter in which they reported receiving excellent feedback from current P3 owners on everything from their packing materials to machine mechanics to software behavior and on-screen graphics. In the same newsletter it was noted there were some delays in building the first and second batch of their P3 game, but for good reason. “Increasing the detail and frequency of quality checks and tests on incoming parts and after building sub-assemblies pays huge dividends versus finding problems when machines are fully assembled and in final test. Each time we discover an issue that delays shipping of a machine, we find the root cause and revise processes to hopefully eliminate the same issue from happening again. The result is slower build times now so that we can have faster build times when we increase build volumes. This is one of a few reasons why we’ve intentionally managed our growth and held back on certain marketing efforts. We are strong believers in walking before trying to run.” So the quality of the games is only improving and the company is however still shipping batches of games every few weeks. With the first two production batches already being sold out Multimorphic announced to be attending fewer pinball shows to focus on production of these games. The company expects to have a corporate presence at the Houston Arcade Expo in October and at the Texas Pinball Festival in March.

Gizmo Game Design showed their two Pitch n Bat games All Star Baseball and Zombie League All Stars earlier this year at the Texas Pinball Festival (TPF). While the team of Gizmo is not announced for a seminar, both games will be present at Pinball Expo as well. Since TPF the company has picked a manufacturer for the games and teased that production is starting soon. More news may be expected at Expo.

Josh Kugler, the programmer at American Pinball, shared some updates on the Pinside forum about the development of Houdini. He indicated he was slightly behind on programming than where he wanted to be. He was waiting for a game with a new playfield and new lamp boards that require some code changes as well. Due to those changes, the previously shown prototypes aren’t available to be presented at pinball shows. While parts for the game are arriving on a daily basis, the company will not start building games until all required parts are in. Instead, they have been focusing on setting up the assembly line and its workstations. American Pinball will host a seminar at Pinball Expo on Thursday, October 12, 4:00 PM. One or more Houdini games are expected to be playable during the show. Regarding code Kugler indicated the code is currently about 85% done. 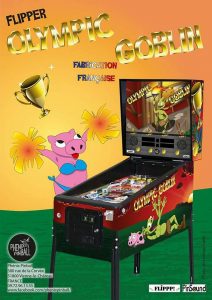 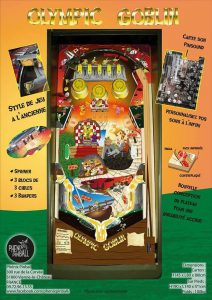 Phenix Pinball from France released French flyer images of Olympic Goblin and will start taking preorders next month. An English flyer is also in the making. The game is intended to be a throwback to the days when playfields were simpler and games easier to understand. While the current artwork may not be everybody’s cup of tea, this remains an interesting development.

Deeproot Pinball is a new(ly discovered) pinball company that contracted pinball designer John Popadiuk as their Lead Game Developer. The company appears to be part of Deeproot Tech and is run by Robert Mueller. The company is based in San Antonio, Texas. The listing of John Popadiuk on Deeproot’s website caused a storm of reactions as Popadiuk used to run Zidware Pinball where he collected pre-order money for three games he yet had to design: Magic Girl (MG), Retro Atomic Zombie Adventureland (RAZA) and Alice in Wonderland (AIW). Eventually, Zidware ran out of funds to take the games into production. At that point, there were prototypes of MG and RAZA. In 2016 American Pinball offered to manufacture the owed MG games and in exchange Popadiuk designed the first iteration of American Pinball’s Houdini, which was later abandoned. Those who pre-ordered RAZA and/or AIW are still waiting for a refund or a game. Deeproot Pinball intends to help in getting those games produced, or to make sure Zidware customers are made whole. So while a part of the pinball community appeared to be loosing their minds at the thought of Popadiuk working for a pinball company again, this may actually be good news. Deeproot Pinball is expected to announce more about their plans in the upcoming weeks.

The Texas Pinball Festival started Pre-registration for their 2018 edition, which will be held March 16-18, 2018. The theme for next year’s show is Kosmic Khaos, which is loosely based on an original game concept that pinball designer Mark Ritchie and TPF organizer Ed VanderVeen came up with while having a few drinks when Ed visited Mark last year. There are no plans to take the concept any further but never say never. On the TPF website, the first special guests for 2018 have already been announced: Actor Lou Ferrigno, known from The Incredible Hulk TV show, and pinball designer Barry Oursler. More special guests will be announced soon.

Pinball Magazine editor Jonathan Joosten will be hosting a seminar at Pinball Expo on Friday, October 13th at 1:00 PM in which he will discuss the progress on the upcoming fifth issue as well as a second publication that will be announced at Pinball Expo.

Pinball Magazine also updated their website and adjusted the format of their popular monthly recap newsletter of what is happening in the world of pinball manufacturing. Where previously all info was available in the newsletter itself, making it rather long and picture heavy, the newsletter now contains a summary of headlines and pointers and links to the full recap on the Pinball Magazine website. During the running month news updates will also be added to the Who’s Working On What-page, so you can stay updated during the month as well.