It’s only a few years ago since John Weeks announced his plans for a huge pinball and arcade museum in Banning, California. Since then he renovated the building he had his eyes sat on, set up his machines and organized his firsts events. The first edition of Arcade Expo, in 2015, saw 3000+ visitors show up. The second edition is being held from January 15-17, 2016 and this report is actually written from the Pinball magazine stand at the show.

While from the outside the building may not indicate very well what’s inside, what’s inside may easily have your jaw drop to the floor. Over 600 pinball and 200 Arcade machines under one roof, all nicely aligned in rows of games, ordered by manufacturer. The place is huge, but yet it feels kind of cosy. Pinball Magazine was able to walk around before the show opened for the public and took some photos to give you an impression of what this venue looks like. 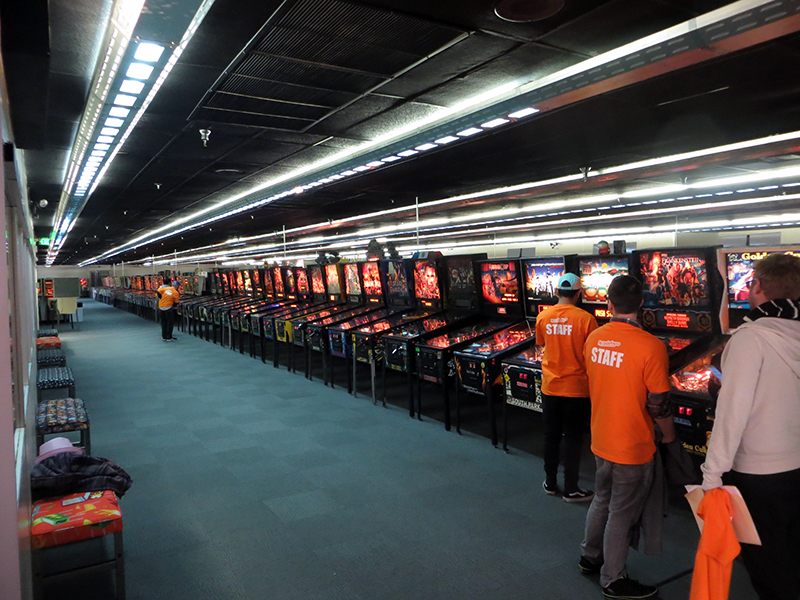 The first row of games 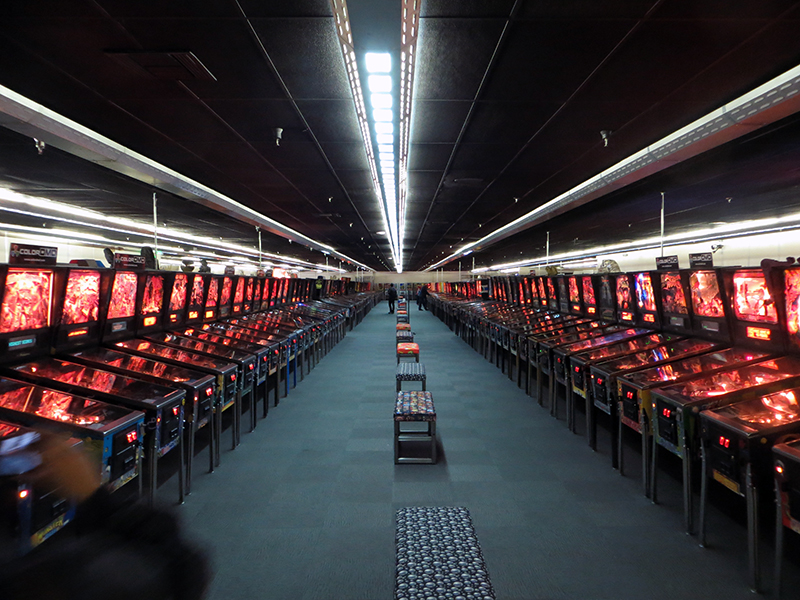 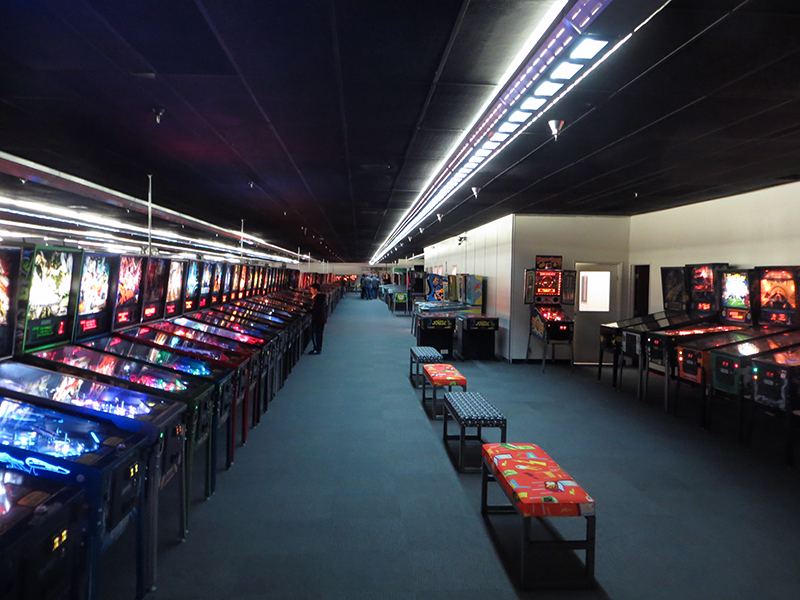 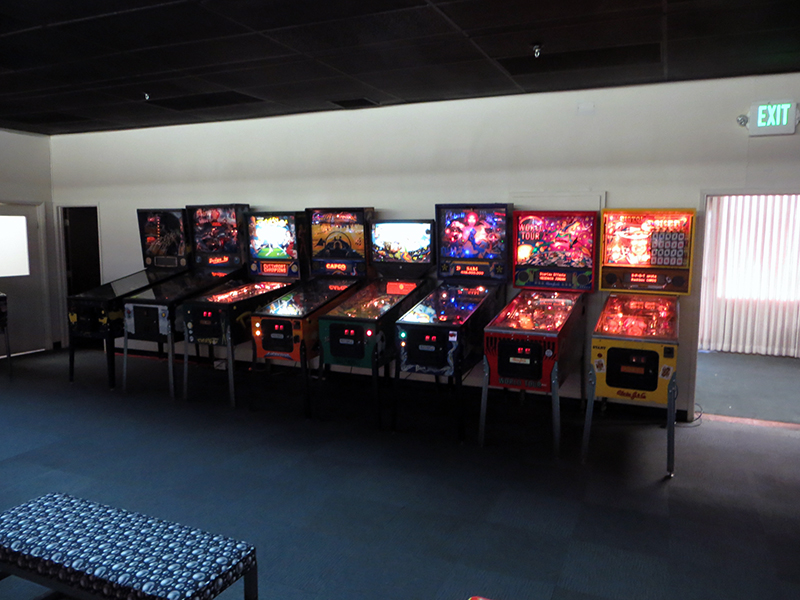 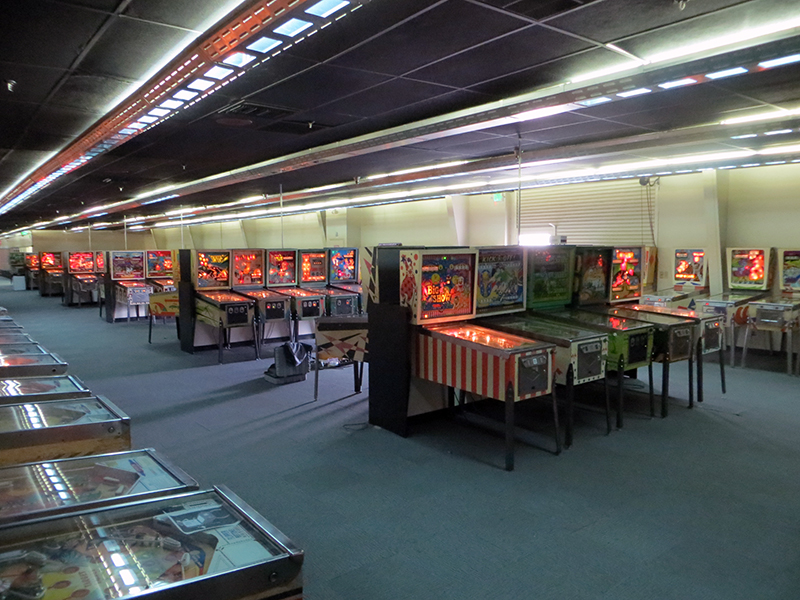 For those not that familiar with the history of the pinball industry: this collection contains several games that are considered to be extremely rare to come by. Bally’s Time Tunnel and Fore for example. Both are Jim Patla designs, which are discussed in Pinball Magazine No.3, of which only 80 units were built in the early ‘70s. Bally’s electromechanical version of Black Jack is also present (only 160 units made). To find these games 35+ years later is not very common, let alone in the nice condition they are in in John Weeks’ collection. But there are more rare games available: two(!) head-to-head Williams Joust pinball machines, several Alvin G games, quite a few Stern Pinball Limited Edition games and a whole section of non American obscure pinball machines, including a whole row of italian Zaccaria games. 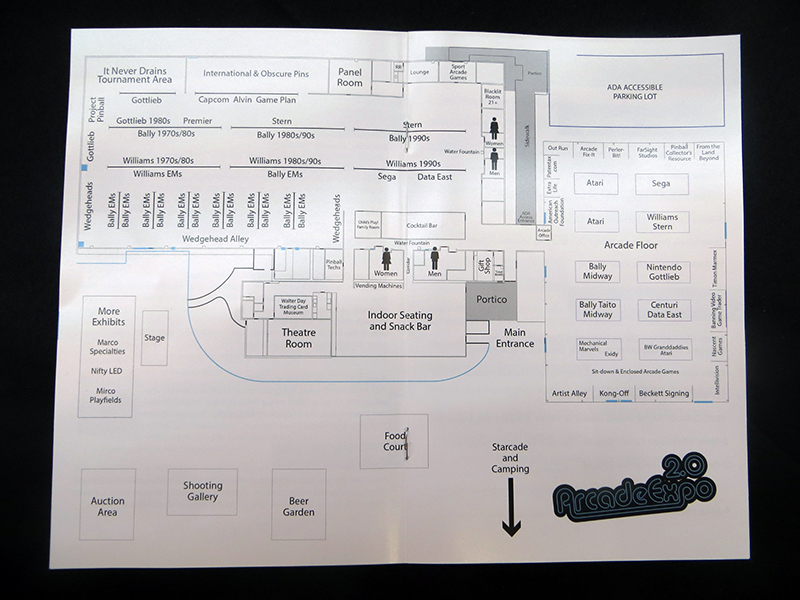 Aside from all the games in the main building there’s also a shooting gallery outside with over a dozen of electromechanical shooting games, a special tent where Mirco Playfields and Marco Specialties have their stands, several food trucks outside serving food, a beer garden and a stage area with music. 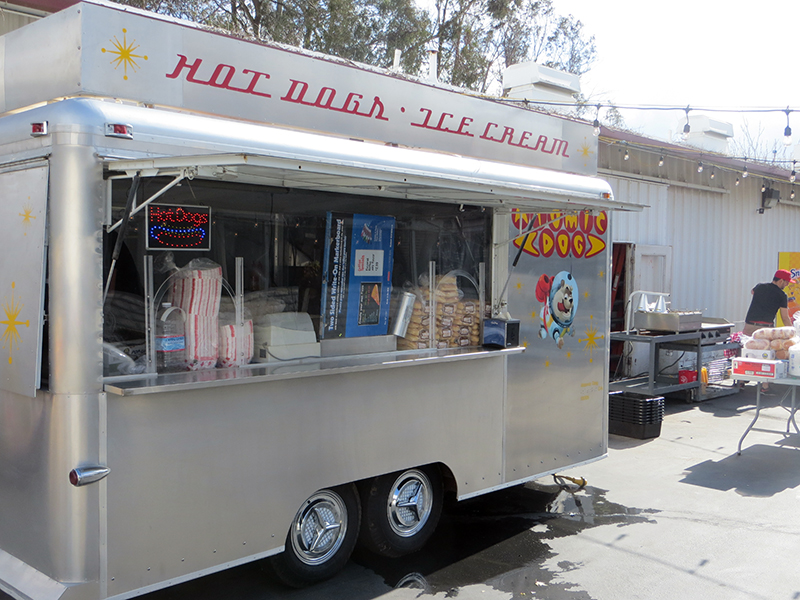 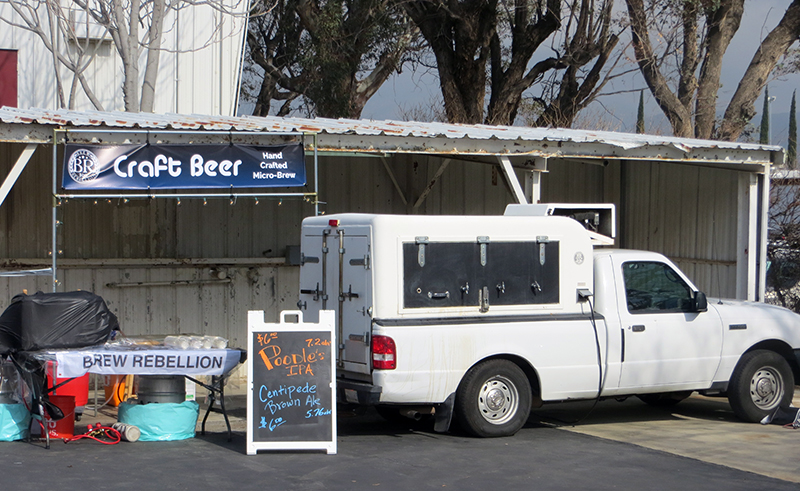 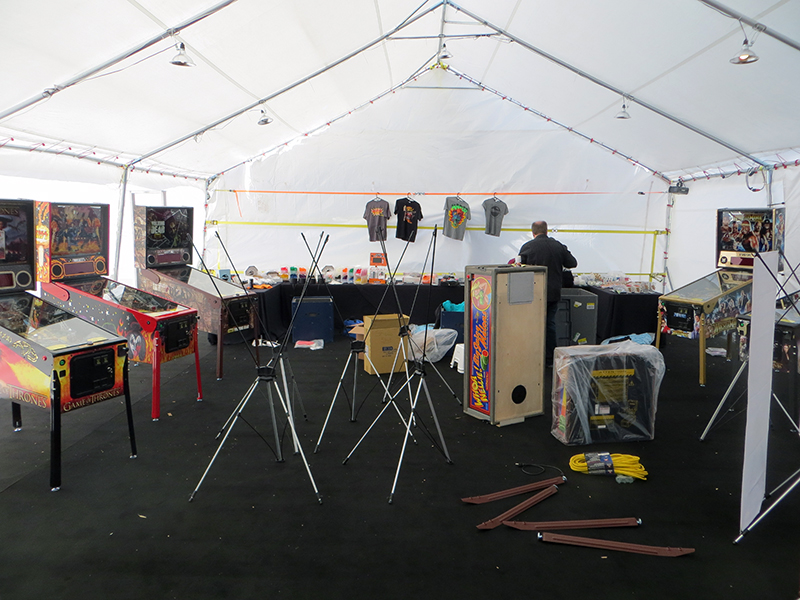 The Marco Specialties stand being build up 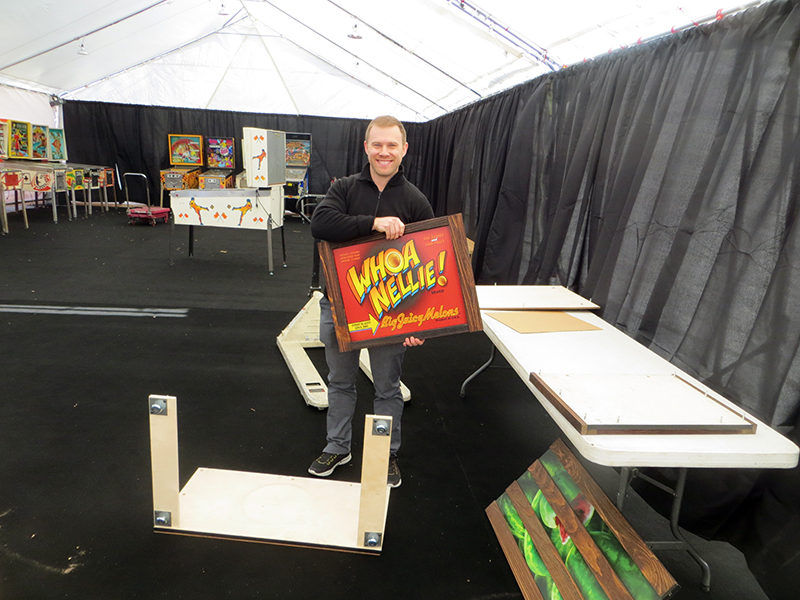 The Arcade Expo event tends to be more like a players event: there are seminars and vendors, but most people just want to play some pinball or other arcade games. There is a tournament being held, for which several well-known pinball players already showed up. There’s also two side games in the stand of Project Pinball Charity. There’s a Little Joe EM game (another Jim Patla design) on which a regular high score tournament is being held. The other game is an AC/DC Premium. This is also a highscore tournament, but with a small twist: the three Thunderstuck standup targets next to the ramp entrances have been wired to the tilt. Hitting the targets tilts the game immediately. Not only does this require a very reserved way of playing, trying to avoid hitting these standup targets. Besides that it’s also hilarious to watch other people play. 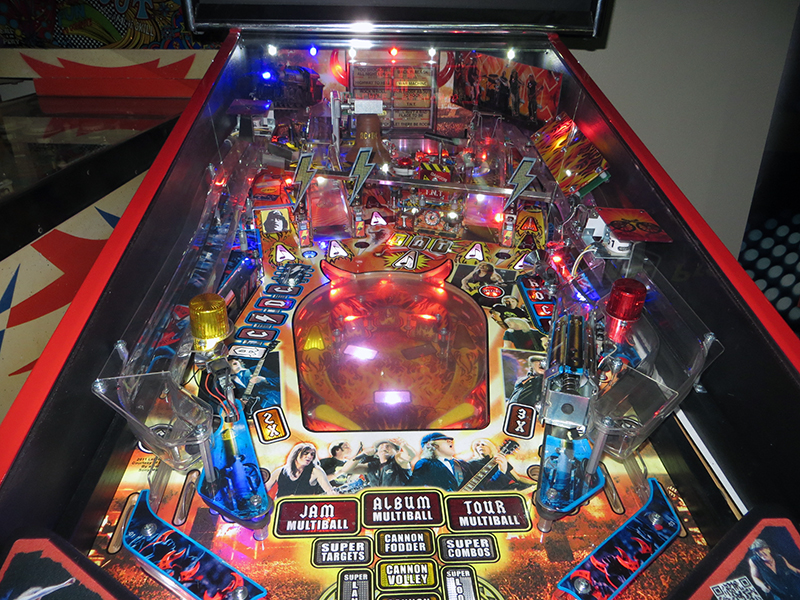 Speaking of well-known tournament players: Keith Elwin is present and he brought a whitewood of the game he’s developing with his brother Randy: Archer Pinball. Although being completely unfamiliar with the Archer cartoon series I found it a very fun and appealing game to play. While the playfield is still a whitewood it has already artwork on the plastics and a ton of video, speech and music. The video, speech and music is already so much integrated that it feels like playing a semi complete game. Compliments for the layout are also in order: the shots are very nice flowing and quite clever as well. The game has four flippers, of which two are in the upper playfield, one on the left and the other on the right, and each flipper has its own loop shot. So that’s like a small loop within a bigger loop that goes into the other direction. Very original. 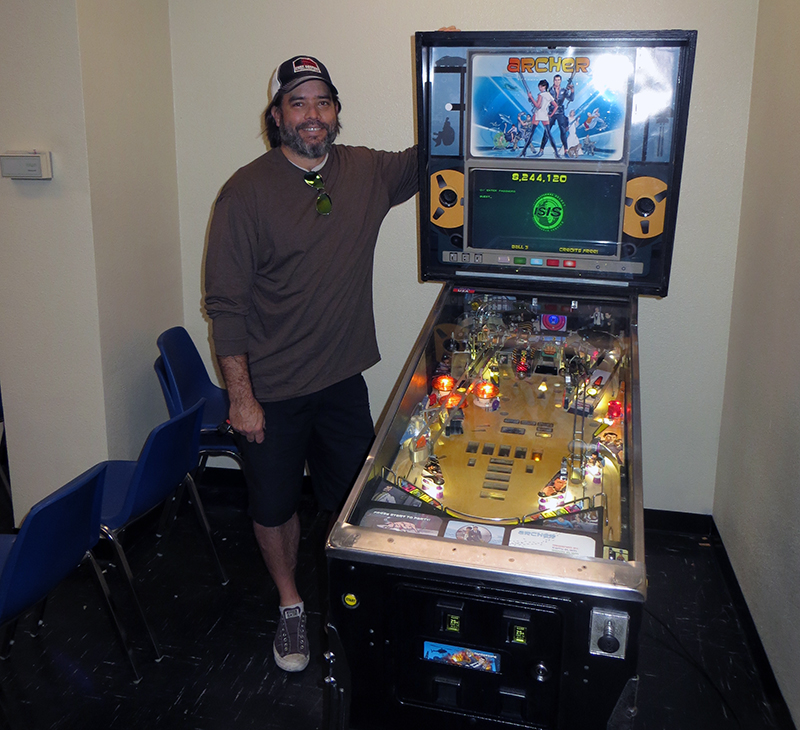 With Keith being one of the best pinball players in the world it seems like he used his experience as a player in designing a very interesting playfield layout. When you think about that it’s actually remarkable that there are so few pinball designers that are also known as good (tournament) players, although some still play quite well.

When asked about his plans for the Archer pinball design Keith said he was just building one game, but if any pinball company would be interested in licensing his playfield design, or even the entire game, he would be open to discuss that.

As Arcade Expo just began and will continue for the entire weekend this report is likely to be updated when there is more news to report. Also reporting from the show is Pinball News. Click this link for Pinball News’ coverage of the show.

Saturday was predicted to be the busiest day of the show and that definitely seemed to be the case. Yet waiting times for games, if there were any, were very acceptable. The weather during the day was very nice and there was a great, almost festival-like vibe outside in the food court.

At 6PM Tim Moyers hosted a Getaway VIP party at The Haven, a local restaurant. At the party Tim presented his customized Getaway pinball machine. After an italian dinner Tim told about how he bought the game as a beat up routed machine. He then went in on the details about handpainting new cabinet artwork which has some local elements added to it. The same goes for the backbox translite of the game, which was done by Aurich Lawson. Aurich used a stock photo of a Ferrari as the center piece, but photoshopped Tim in it as the driver. 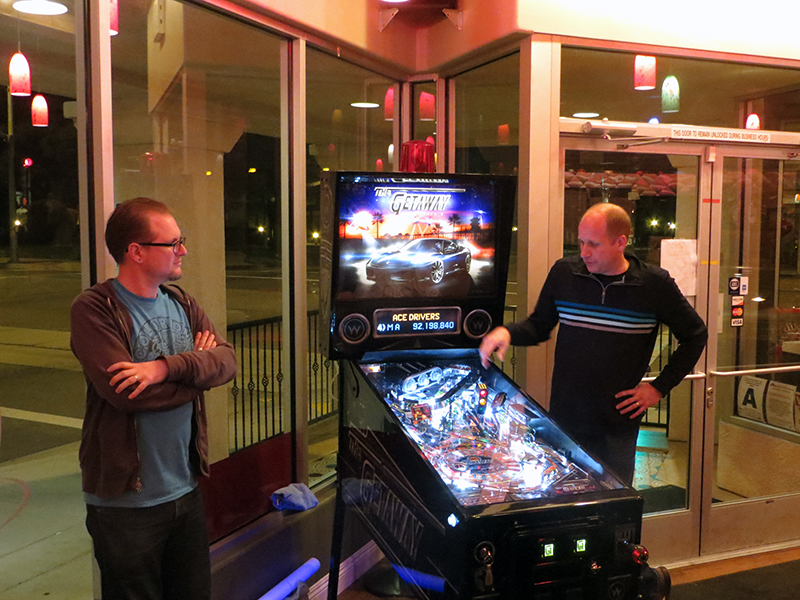 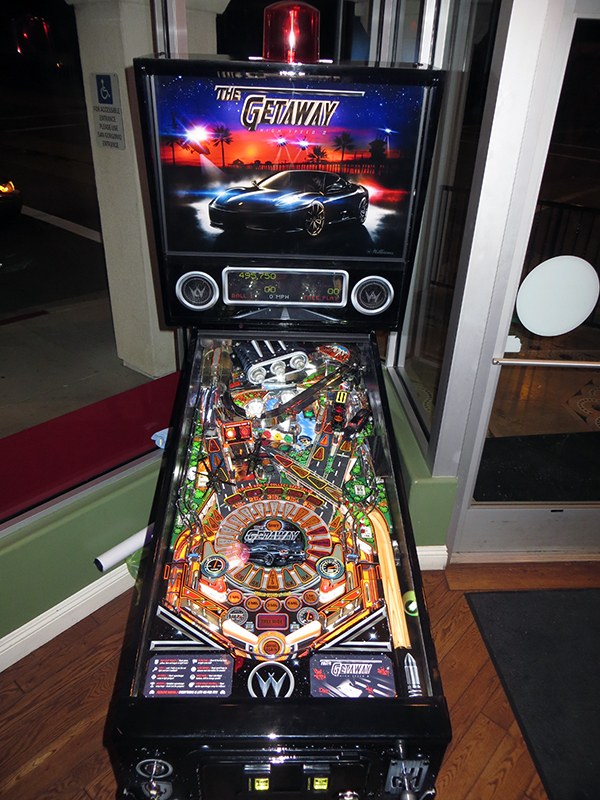 The playfield has been clearcoated several times and customized at certain elements, like darker freeways. Most steel part were replaced with polished stainless steel. The siderails and lockbar were powdercoated. The cabinet was also clearcoated, resulting in a very shiny gloss all over the game. The game is still running on it’s original boards, but a ColorDMD has been added, as well as a PinSound audio board allowing to replace the voicecalls from the game with custom ones and additional speech. The board also allowed to replace the synthesized ZZ Top music in the game for the original version of the song.

Following the presentation a small tournament was held in which some game related prizes could be won. Pinball News’ Martin Ayub set a grand Champion score of over 200M points. His score would be beat in the next round, but still had him win a translite of the game.

When asked what would be next Tim mentioned he’s likely to start on a game that will be based on a Sorcerer game, but the playfield design will also be modified.