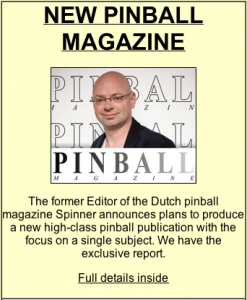 The highly acclaimed and informative pinball related news-website Pinballnews.com is publishing an article today in which Pinball Magazine is announced. The article explains what the magazine will be like. It also features some quotes by Pinball Magazine editor Jonathan Joosten, who is described as ‘a man with a mission’. You can read the entire article below, or on Pinballnews.com.

Jonathan Joosten is a man with a mission.  As the former Editor of the Dutch Spinner pinball magazine, his mission is to take pinball publications to a hitherto unexplored level and create a true high-quality pinball magazine unlike anything seen in the business before.

His mission is to create Pinball Magazine.

The first is the content, which will concentrate on a single topic and explore it in depth.  Be it an interview with someone notable in the pinball business, the examination of a pinball company or the development of a single machine, Pinball Magazine will give the subject as many pages as are needed to fully cover it.

The second difference is in the production values which will result in a Vogue-like quality, with stylish layouts and large, high quality photographs printed on quality glossy paper stock.

In addition to each edition’s main subject, there will be regular features such as an editorial column, an update on who is working on what, and a diary of upcoming pinball events. 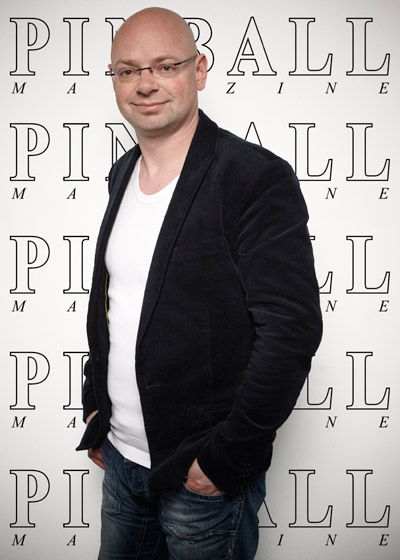 Pinball News spoke exclusively to Editor and Publisher, Jonathan Joosten, and asked him why he chose to enter the pinball magazine business at this time. “I just see an opportunity and I think I have the right amount of energy, enthusiasm and creativity to produce something that people will actually like: a glossy magazine on pinball like not seen before. I came up with a format in which I can combine some of the things I truly like to do: interview the creative minds from the pinball industry and make a magazine. Plus, also important, I think the format will be so different that it won’t be competing with what a magazine like Pingame Journal currently is doing, which I wouldn’t want.”

Pinball Magazine will also break the mould by not requiring readers to sign up to a subscription.  Instead, each edition will be published as and when it is ready, and will be sold individually through the publication’s website, or possibly through distributors where that makes commercial and practical sense.

Jonathan told us, “I’ve set up a newsletter on the magazine’s website: www.pinball-magazine.com. The online shop will follow soon. The newsletter will inform people when a new issue is due and what it will cover. Then they can decide wether they want to order it or not. The same goes for advertisers. Potential advertisers will receive an e-mail upfront with what the next issue is about. Then they can decide wether they want to advertise in it or not. So, basically it is up to me to find the right topics people want to read about, and the advertisers want to advertise around. I’m pretty confident I can do that, so everybody wins :)”

You can keep up-to-date on the latest developements on the magazine’s Facebookand Twitter accounts, and Pinball News will have a full interview with Jonathan in the coming weeks as publication of the first edition of Pinball Magazine draws near.