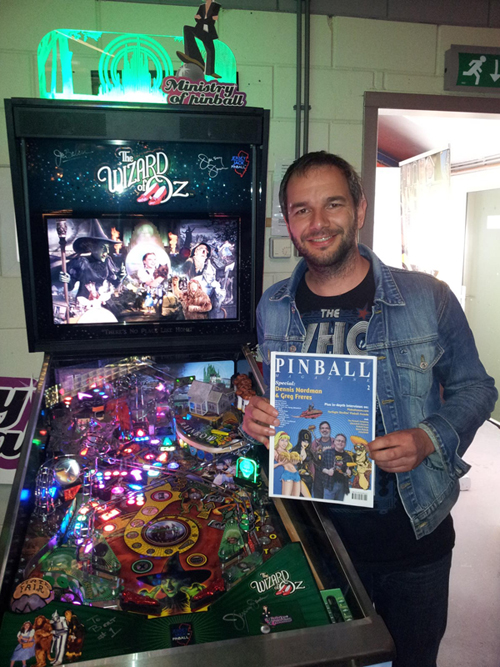 Wizard of Oz graphics animator Jean-Paul de Win posing next to the game he worked on, holding a testprint of Pinball Magazine No.2. JP also did the finishing touches on the cover.

To celebrate Pinball Magazine’s first anniversary we’re publishing not one, not two, but three up to the minute interviews with Jersey Jack Pinball crew members. After talking to Jack Guarnieri and pinball designer Joe Balcer earlier this week, we’re glad to be talking to Jean-Paul de Win. Jean-Paul is responsible for the animations shown on the large LCD screen in the backbox of Wizard of Oz. He will also be working on The Hobbit.

PM: Jean-Paul, you created the animations for The Wizard of Oz. Now that the game has been delivered, is that project now completely over for you?

JPdW: Yes and no. Keith is still programming the rules of the game, so every now and then something comes along that I need to add or adjust. Occasionally I also feel I can improve certain animations, so I adjust these in my own time.

PM: Apart from the animations, have you also been involved in other aspects of the game?

JPdW: Have you seen one of the latest clips with a new light show?

I can’t go into any technical details, but I was involved with some of the recently added lightshows as well.

PM: That looks really cool. How do you look back on the Wizard of Oz project?

JPdW: It is the biggest project I have ever done in terms of animations. I’m very proud of what it became.

It’s a bit weird to realize that I may still run into my own work twenty years from now, in a bar or in someone’s gameroom. Most of the animation stuff I have done in the past was for TV. After three or four years those animations are replaced so you don’t see them that often anymore. Wizard of Oz is something that’s here to stay and that makes me very proud.

PM: Can you tell me whether the approach to animations in The Hobbit will be similar to Wizard of Oz, or totally different?

JPdW: I don’t think we’ll use the same approach as on Wizard of Oz. Things are slightly more difficult as with Wizard of Oz I had instant access to the entire movie. Now I have to anticipate what is still to come. We haven’t seen the second and third movie, so it’s not easy to select scenes that could be used in the game. We’ll just have to wait and see. 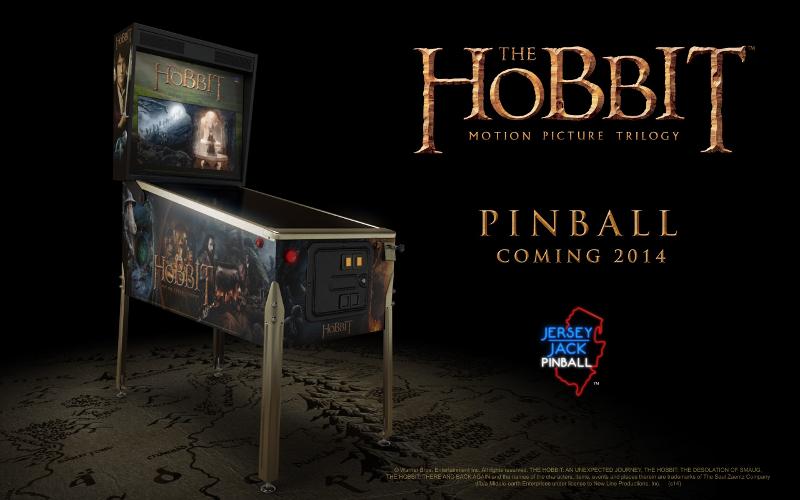 PM: Do you have any idea what will happen in the movies?

JPdW: I did read the books, and we’re also in touch with Warner Bros, so we know what movie two and three will be like. But they won’t release any footage yet for me to work with.

We do have access to a huge database of material, like style guides, elements, patterns and so on. Those are all stills, but there is the video of the first movie, so I can start with that.

PM: So the game will focus on all three movies?

JPdW: Yes. The game will also get the subtitle: Motion Picture Trilogy.

PM: So, while you don’t have access to the second and third movies, these style guides and other material help you to define the basic environment: the look and feel that the game will have.

JPdW: Yes. I think The Hobbit will be more challenging for me, because the special effects used in the movie. When they filmed The Wizard of Oz it may have taken them a week to do a twister effect, or probably more. Nowadays I can create that on an iMac at home in one day. The Hobbit is likely to have all the latest special effects in the movies, which may make it harder for me to get those right.

In the mean time I’m already working on the standard animations for an Extra Ball, a Replay and so on. But it will be difficult to anticipate  the final Wizard-mode as that is likely to be linked to the third and final movie. I’ll try to get in as much as possible, but some things just have to wait until the third movie is out.

PM: Since The Hobbit is based on three movies, can you still manage the project on your own?

JPdW: Well, we’ll just have to wait and see. There are some people who would love to help out, but I’ll have to figure out the big picture first. At the moment I can handle it all, but this project is likely to grow bigger.

PM: According to designer Joe Balcer there are huge possibilities for the monitor.

JPdW: That’s true. I said so myself when we started out with Wizard of Oz. In that game we ended up with these four frames spread over the monitor. The next game may have a completely different look and feel, with completely different interaction than we’ve seen now. You can think of so many different approaches. To me it just makes it more clear how limited the regular dot matrix display is. Even I am curious to see what we will be doing with our monitor in the future. I think we will start seeing different styles, just like there are different styles in backglasses.

JPdW: Yes, the possibilities are there, but we haven’t discussed them yet. Personally I’m not a big fan of video modes. I don’t find them that interesting in relation to pinball machines. I want to play pinball, not a video game. I think the risk is there that it will seen more like a video game, which is not the intention.