DN: Well, they could tell I was creative with my cabinet and game design ideas that I had presented. While working at Bally – Midway was part of the company before they officially merged – I came up with an idea for a new Pac-Man game. They never used the idea, but even to this day I think it would have been a cool game. The art director at Gottlieb could see my creativity, so he hired me to come up with video game concepts. 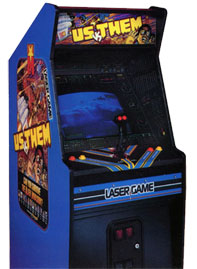 The Us vs Them videogame

While at Mylstar I tried to put more of a storyline into Us vs. Them, their second laserdisc game. We all know now that laser players always had problems. So those early laserdisc games weren’t very successful.

In one of the games I proposed you could be your own drummer. As you looked at the video screen these signals, or colored bars would come down. When the colored bar hit the target area, you hit the button. The colored bars would come down in such a sequence that you could hit the button to make different drum sounds and if you were good you could make a rhythm. Well that never went anywhere, but look how popular games like that are today.

PM: So basically you came up with the concept for games like Guitar Hero and Dance Dance Revolution?

DN: I was way ahead of my time. [laughing] Too bad nobody recognized what a brilliant idea it was.

PM: Then Gottlieb / Mylstar was bought by Coca Cola.

DN: Yes, and I got laid off again. [laughing] I took the family to Disney World. We had a great time in Disney World. This was probably in June. I come back home and there was this telegram. They did it with a telegram! [laughing] That telegram sort of ruined the memories of that trip for us.

PM: So then what did you do?

DN: I tried to design some Redemption games. I built some models, but I didn’t sell any. I was on unemployment for a while and I thought “I’m gonna try to design a pinball game.” About the time Sylvester Stallone’s First Blood – the first Rambo movie – came out, which was very popular. There was a lot of information on Army Rangers because of the Rambo movie that all seemed to blend together. I also got some Army Rangers brochures from one of my stepsons who got them at a recruiting office. So with the popularity of Rambo and Army Rangers in mind, I thought I’d design a game around that theme. 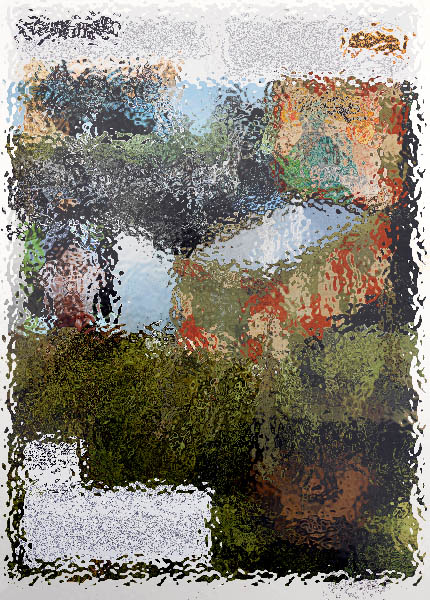 Blurred image of Dennis’ original Rangers poster. The unblurred version is published in Pinball Magazine No. 2

So, I cut up all these flyers, stuck them together and made this poster using the theme that I wanted, with exciting pictures and elements and explosions, with a little sketch of the game and a little description of the game, and went back to Bally. At that point, when I made the poster, I had no idea what the playfield would look like. It was just something to sell Bally on the idea of doing a Rangers game. Bally had merged with Midway and had a new president, but I was still friends with everybody that worked there like Jim Patla and Greg Freres. I’m sure those two put in a good word for me. My wife was also still working there. But, based on that poster and concept, which I had titled Ranger (because it was based on all the Army Rangers stuff), they hired me. That game became Special Force.

PM: So you got rehired at Bally and that’s how you became a pinball designer.

This concludes the first chapter of the Dennis Nordman interview, as published in Pinball Magazine No. 2. In the remaining seventeen chapters all of Dennis’ pinball designs (and more) are discussed by Dennis and graphic artist Greg Freres. Greg worked closely with Dennis on at least five of his designs. The entire interview covers 90 pages in Pinball Magazine No. 2, not counting contributions by people like pinball designers Steve Ritchie and  John Popadiuk, graphic artists Doug Watson, John Youssi and Pat McMahon, technical right hands Mark Weyna and Ken Walker and others. See the content listing for PM02 for a full list of all chapters and people who contributed to the cover story. All side articles are listed as well. To order your copy of Pinball Magazine No. 2, please visit the Pinball Magazine web shop.