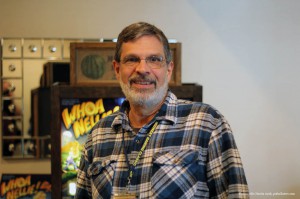 Issue 2 of Pinball Magazine presents a doubly special cover story focusing on the career of pinball designer Dennis Nordman. Dennis worked for Bally, Williams, Stern, Jersey Jack, and as of just recently, Multimorphic. Dennis contributed to the design of a host of games including: Blackwater 100, Party Animal, Demolition Man, Indianapolis 500, Pirates of the Caribbean, The Wizard of Oz and others. In this exclusive interview Pinball Magazine discussed Nordman’s entire career with him, game by game.

However, when talking with, or about, Dennis Nordman, you simply can’t ignore pinball artist Greg Freres. Dennis and Greg worked together at Bally and Williams, producing some amazing pinballs: Dr. Dude, The Party Zone and the two Elvira-themed games. In 2009 the pair formed Whizbang Pinball, which resulted in the truly unique Whoa Nellie! Big Juicy Melons game. Greg joins the discussion on the games he and Dennis designed together and during the interview he revealed much more.

Below is part 1 of 3 of the first chapter of he Dennis Nordman interview in which Dennis talks about how he became a pinball designer. Please note: the same chapter in Pinball Magazine No. 2 contains more photos and images than are published below. To illustrate the length of the interview: the full first chapter is six pages in the magazine. The entire interview covers 90 pages in the magazine, not counting the contributions by others about working with Dennis Nordman and /or Greg Freres.

PM: Dennis, let’s start at the beginning. Did you grow up with pinball?

DN: No, interestingly I didn’t grow up with pinball. The first real exposure I had to pinball that I can remember was when I was probably eight or nine. My father took us to his friend’s place that we used to go and visit, and one day when we went over there he had a pinball machine. This was back in the late 1950s, so I don’t remember the game or anything about it.

I might have played a little bit, but I don’t remember. I do remember I was just fascinated by the lights, and the colorful artwork. My dad wasn’t too interested in it. He wasn’t a game player kind of guy. That was the first pinball machine I ever saw and that I can remember paying attention to. I just loved it.

And then I didn’t get interested in pinball again until I was about nineteen or twenty, twenty-one maybe. I went with some friends to an amusement park in Ohio called Cedar Point; it is a fairly popular park near Cleveland. I discovered all the old pinball machines and I played, and played, and played. I just loved it. So that was my first real exposure to pinball.

Then I got out of again, or didn’t play it for a couple of years, until my brother and I started going around looking for pinball machines to play. I went to another amusement park near Cincinnati with my daughter, called Kings Island. We saw Gorgar for the first time and we played it a lot. We had a great time playing that game and we thought it was pretty cool. She still remembers that day.

DN: I don’t know when Gorgar came out (December 1979 – PM); it might have been late ‘70s. But before I got married and had my daughter, I played a lot with my brother. I remember specifically playing Wizard a lot; we really liked that game. We would go to different arcades and play the pin games. They had an arcade in Columbus, called Funway Freeway; I used to go there a lot.

Then my life changed. I got divorced; I moved in with my grandmother on her farm and went back to college to major in Product Design. During my senior year I thought that pinball machine cabinets hadn’t changed in fifty years, or however long they had been around, and I wanted to design a new,

modern, contemporary cabinet for pinball games. So my professor let me do that. I used to play a lot of pinball then, because I was telling myself I was doing research. [laughing] So this was in college in the very late ‘70s.

So my professor let me work on that pinball game cabinet. It had a lot of great features in it. At the time I designed it, even though the pinball industry was going to solid-state games, they still had the digital displays stuck all over the backglass where the old score wheels used to be. And my thought was they should organize all that, so it would be easier for the players to visually access their score and see what they were doing. It should be all in one local place.

I also made the playfield tapered. I liked the fact that there was a lot more room on widebodies, but to me, at the bottom at that time, they were just boring. Widebody games like Space Invaders that I played at the time, they just played so slow at the bottom. They just had like three or four lanes on each side of the flippers; it was just a waste of space. When you made shots from the flippers they would go out in like a V-shape, so I thought I’d make it as wide as a widebody in the back, but narrow in the front like a regular game, which is more comfortable to play anyway. So you’d still make shots towards the top but you wouldn’t have to spread your hands so far apart to control the flippers.

The whole thing opened up like the hatchback of a car. You couldn’t slide the glass out since it was tapered, so the whole thing just opened up. The glass was attached to it and it would have cylinders to lift it up. I put a framework around the tapered glass. And the other thing I did, at the time the speakers were still at the bottom of the cabinet, I thought it would be much easier to hear if there where speakers aimed at the players. So my cabinet had speakers near the display that aimed the sound towards the player. 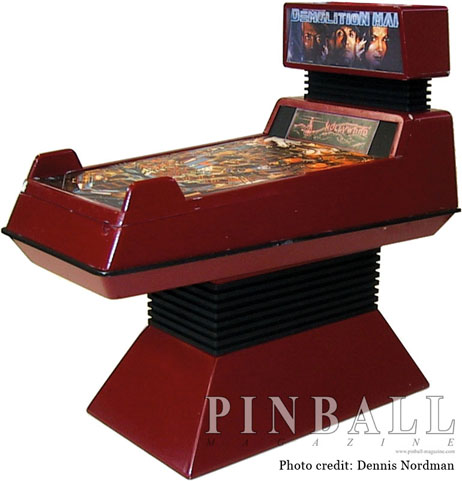 I also put the cabinet on a pedestal (there were no legs) to help it look more contemporary and modern. The whole cabinet had a nice tapered shape look. It was designed to be made out of fiberglass because of its interesting shape.

So I finished that, and I got an A on the project. I started my second quarter as a senior and I injured my back. I had had back surgery when I was eighteen or nineteen, but I had another disc that went bad, so I had to have surgery. I had to quit college because the surgery was more intense than last time and I couldn’t ride in a car for six weeks.

So what I did, while I was recovering, and once I was able to, I built a full-size version of the cabinet. I had a radial arm saw, which was about the only tool I had, and I had a little old shed at my grandmother’s farm. In fact, the shed is still there. We had to sell the farm, but the shed is still there. I took a picture of it because in that shed is where my whole career started. 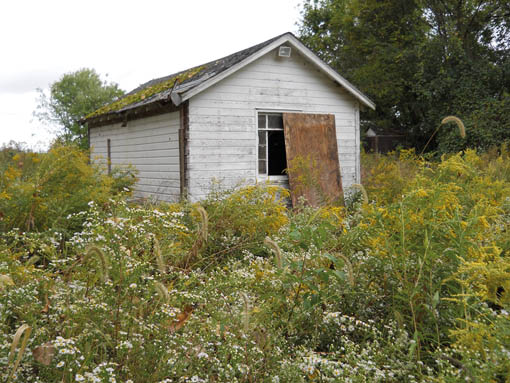 In school I had built a quarter-scale model out of acrylic. I built a full-size version after recovering from back surgery and my plan was to show it to a pinball company and see if I could get hired. There was a distributor in Columbus, Shaffer Distributing, and when I had finished the cabinet, I took it over there and I took some pictures of it standing next to other pinball machines. It just so happened that the president of Shaffer had moved to Bally to become president of the pinball division, but he was from Columbus, Ohio, too. I contacted him at Bally and took my van and my cabinet out there. I made a presentation and they hired me to design cabinets, to see if I could change the cabinet design, or modernize it, or update it or something. 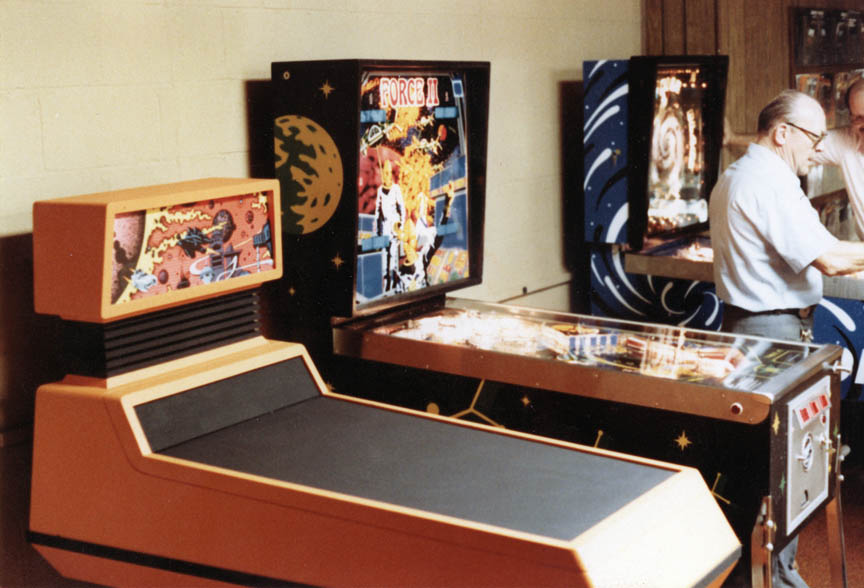 The prototype cabinet at Shaffer Distributing

So when I drove out to Chicago with my pinball game and my slide presentation, my friend Doug – who I raced a lot of motocross with, all the dirt bike racing we used to do – he came with me so I wouldn’t have to drive out here alone. The whole time I was giving my presentation and talking to everybody, he was sitting out in my truck reading the paper. He’s a good guy. Then they took me out to lunch and they took Doug out, too.

PM: In the photo your cabinet is dark red but, at Bally there was an orange one.

DN: The photo is the quarter scale model. When I was in college I painted it orange. Then when I put the Demolition Man artwork on the playfield, I repainted it red. That’s the same one; I just repainted it. There was only one full-size one and only one model. The full-size one I guess Bally probably threw it out, but the model I still have and that’s the one I repainted red.