American Pinball and Aimtron Corporation are proud to announce the addition of two members to their team: Barry Oursler as Game Designer and Barry Engler as Senior Production Manager.

Industry veteran Barry Oursler produced his first game, Phoenix, for Williams in 1978. He continued to design more than 40 games in his career … SO FAR! Barry has always been known for his timely design pace, producing at least 20 games in his first decade in the industry. As a protégé of the iconic designer Steve Kordek, Barry’s classic Space Shuttle is a game that many say saved pinball. Other highlights include famed games such as Comet, PIN*BOT, Doctor Who, and the mega-hit Gorgar: pinball’s first talking game.

For the past couple of years, Oursler has been working for several startup pinball companies on games that eventually didn’t go into production as these companies ran into financial problems. At Heighway Pinball, he worked on Queen, followed by several games he designed at Deep Root Pinball. Barry reports he is just as happy and excited to be working on his first game for American Pinball as they are to have him. 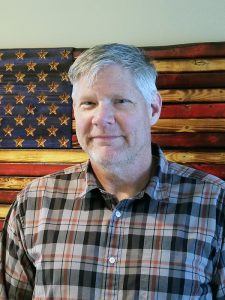 Barry Engler began his first six years in the industry in 1990 as a service technician for several amusement location operators in the Chicagoland area. During this time, he became highly experienced with a wide variety of coin-operated games.

Barry earned his Electrical Engineering degree In October of 1996, which also marked the establishment of his company, 4 Play Amusements. This organization operated many types of amusement equipment in the area, and he served as its president until it was sold in 2017.

At that time, Barry began his first experience at American Pinball as he managed both their Service and Production departments. As if that wasn’t enough, he made a name for himself on the “pinball show circuit” through his sought-after presentations on pinball repair. While at American, Barry also helped with their first redemption game, The Flying Dutchman. However, that product was put on hold at the start of 2020 due to COVID-19 concerns.

In February of that year, Engler then joined Jersey Jack Pinball as their Service Manager. While at Jersey Jack, he concentrated on Departmental Procedures and strengthening the Distributor-Manufacturer relationship. Engler is excited to be back and eager to have the opportunity to contribute to American Pinball once again.