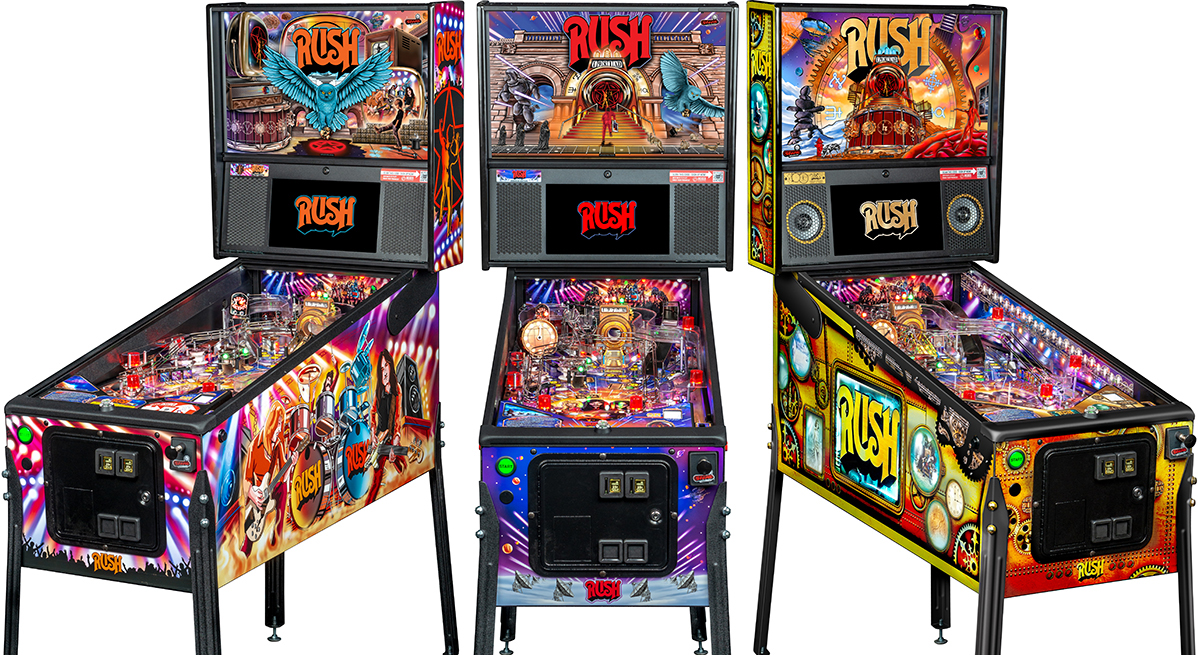 Following a teaser video, last week, Stern Pinball have now revealed their newest cornerstone title RUSH. Below is the Gary Stern mailing to distributors with lots of info: 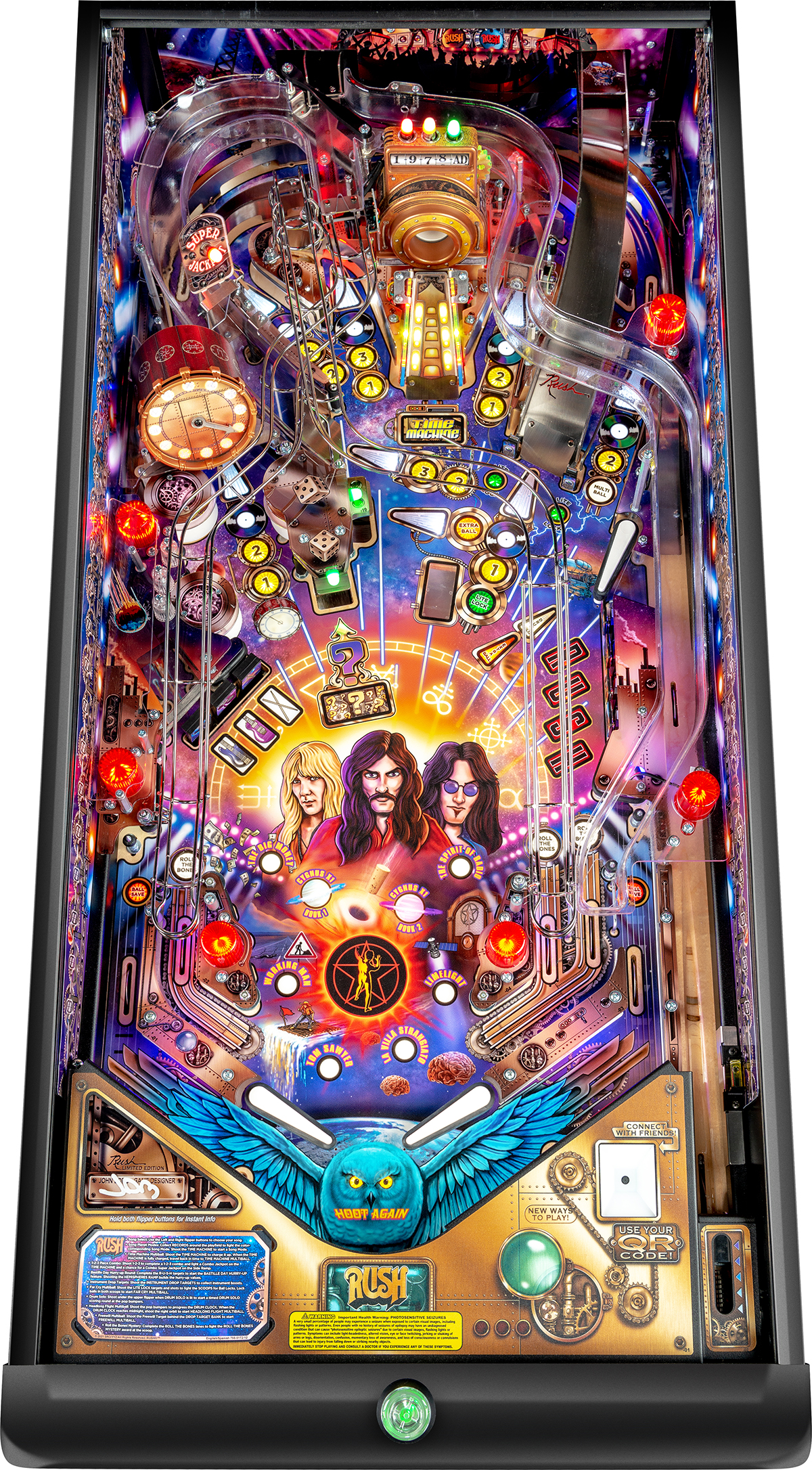 John Borg and Tim Sexton have built RUSH pinball around these iconic RUSH songs and RUSH symbols. A ramp leads to a custom molded RUSH electromagnet Time Machine, holding and then expelling balls out forward and back. The 3-bank drop targets are coded to collect guitar, bass, and drums. Rules are visually portrayed with R-U-S-H spell out target, 1-2-3 arrows, 17 RGB lit inserts, and 3 RGB pop bumpers. Its two large metal and plastic ramps include a player and game controlled diverter, redirecting the ball to either return lane. Scoops facing the playfield front and side lead to an under playfield subway; players can view ball flow through an insert before the balls are kicked out the front scoop. Added to this are red and white GI lighting, 3 flippers, 4 main mulitballs, 6 main timed modes, and more. Games are ready to add the accessory Expression Lighting System, a must for a rock game. 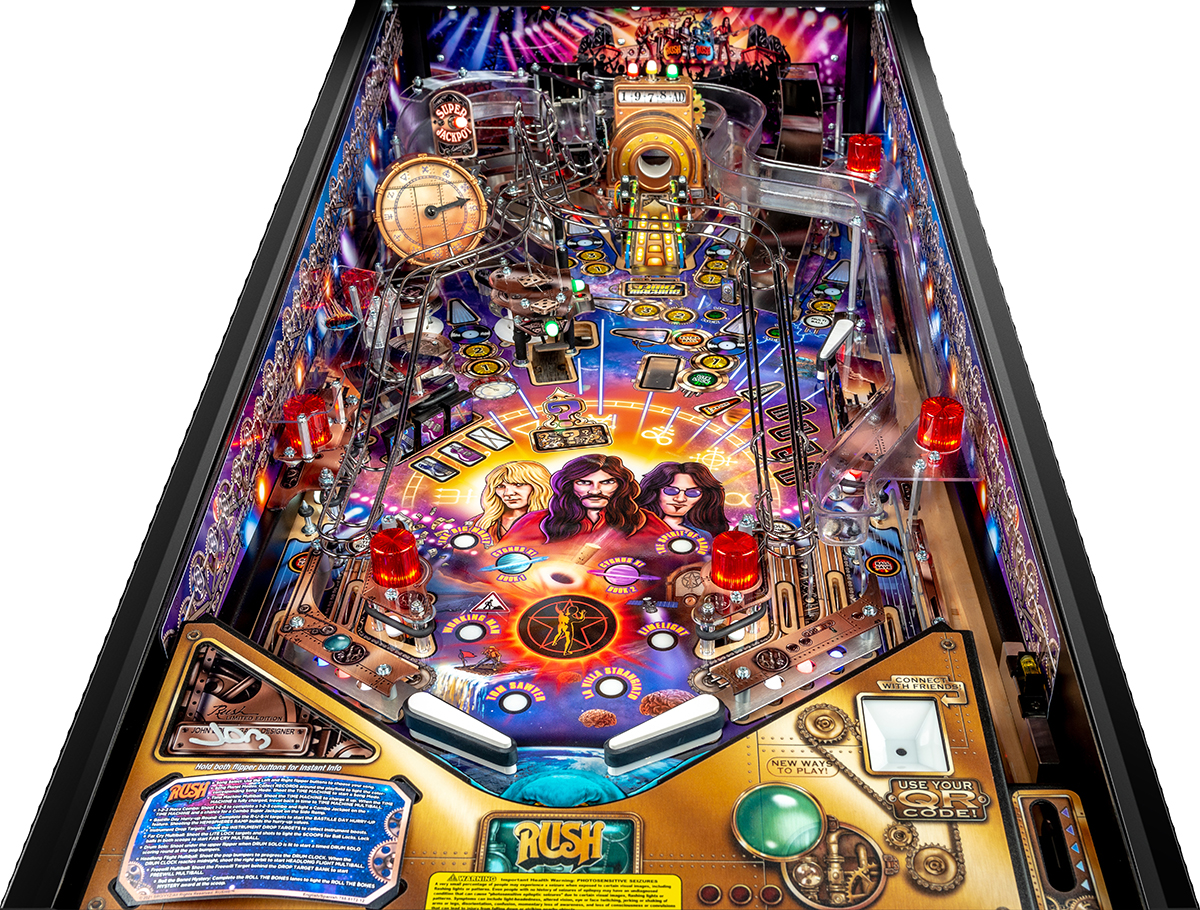 The Premium/LE have important changes from the Pro. The Time Machine ramp is motorized, up and down, with custom lighting effects on its side and floor. Neil Peart’s drum is custom molded into a Clockwork Angels Clock, with motorized minute hand to stop at all 12 face numbers. Behind the drop targets is a ball lock post system, using a captured ball as a Newton ball. The under-playfield subway can lock balls and kick out the side scoop in addition to the front scoop, kicking balls out both at once. An added VUK fires the ball up a wire ramp. GI lighting is red and white plus blue.
Stern will make 1,000 Limited Edition games featuring these enhancements and collectibles: 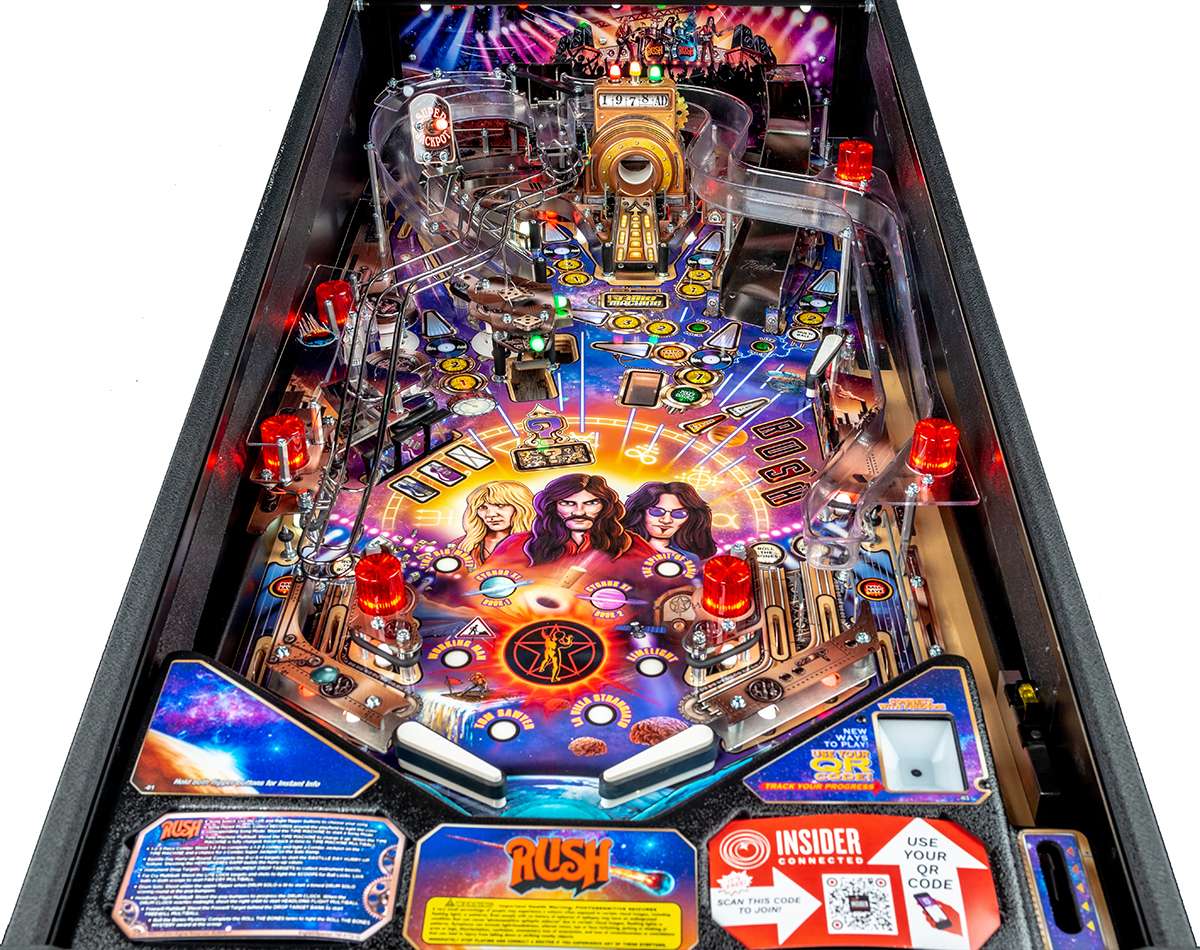 RUSH will ship equipped for Insider Connected™. Another new title with all games fully equipped for connectivity is essential to achieving the greatest early Insider Connected adoption and fastest success. All Stern commercial LCD games are being manufactured equipped for Insider Connected. We have shipped thousands of kits to upgrade earlier Stern LCD games with Insider Connected. We will ship thousands more starting this month. Near 20,000 players are registered. Thousands of games are connected, half in commercial locations.
On New Years’ Eve Day we stopped production to take year end inventory. We will resume production during the second week of January with RUSH Pro. We will follow later in January with RUSH LE, then in February RUSH Premium. We increased our production rate in December, and we are staffed and have parts to increase it more.
We again ask that our USA customers help us dedicate the first Pro models produced for commercial use. This is a good policy for international customers also. More people can see and play a new game on location than can see it in someone’s home.
The wholesale RUSH Pro and Premium prices will be the same as Godzilla, in spite of continued supply chain cost increases. As previously announced, all other Pro and Premium models will also be the same prices. Contact your sales rep regarding any order impact. The RUSH LE price is increased; your sales rep will contact you with details. As normal, full LE payment is due with order and without cash discounts. Costs for specifying an LE number remain the same.
A new UMRP, MAP and MSRP list will be sent to USA customers shortly. The USA MSRP’s are as follows:
A full line of accessories will be available. We will provide you separately with dates for art blades, side armor, shooter rods, toppers, and Expression Lighting Kits for Pro and Premium.
I have a preproduction RUSH in my apartment. It plays absolutely great! Watch the RUSH game play video over and over, both on our webinar and on Stern sites. Get the game on your showroom floor. You will agree — RUSH pinball is Rock N’ Roll.
Best regards,
Gary
Gary Stern
President
Stern Pinball, Inc.”

Over 50 images of all three RUSH models are available on Stern Pinball’s Facebook page.