It’s mid January, which means time for the EAG Expo in London – UK. The show was held at the ExCel complex in the Docklands, where it has been held for the past few years now. Aside from various coin-operated pinball themed toy games for kids the manufacturers of arcade sized pinball machines were also represented. Well, some of them.

Stern Pinball is represented with three games in the stand of UK distributor Electrocoin. The games presented are Aerosmith Pro, Batman Premium and a Ghostbusters Pro. In the flyer racks various pinball flyers were available, also for games not present at the show such as Game of Thrones and Walking Dead. As there is no flyer for Aerosmith at the moment A4 color-printed leaflets were available instead with images of the three versions of the game.

Representing Stern Pinball were Gary Stern, John Buscaglia and Dave Peterson. Dave was absent on the first day of the show, but is already in London and should be at the show on Wednesday and possibly Thursday. 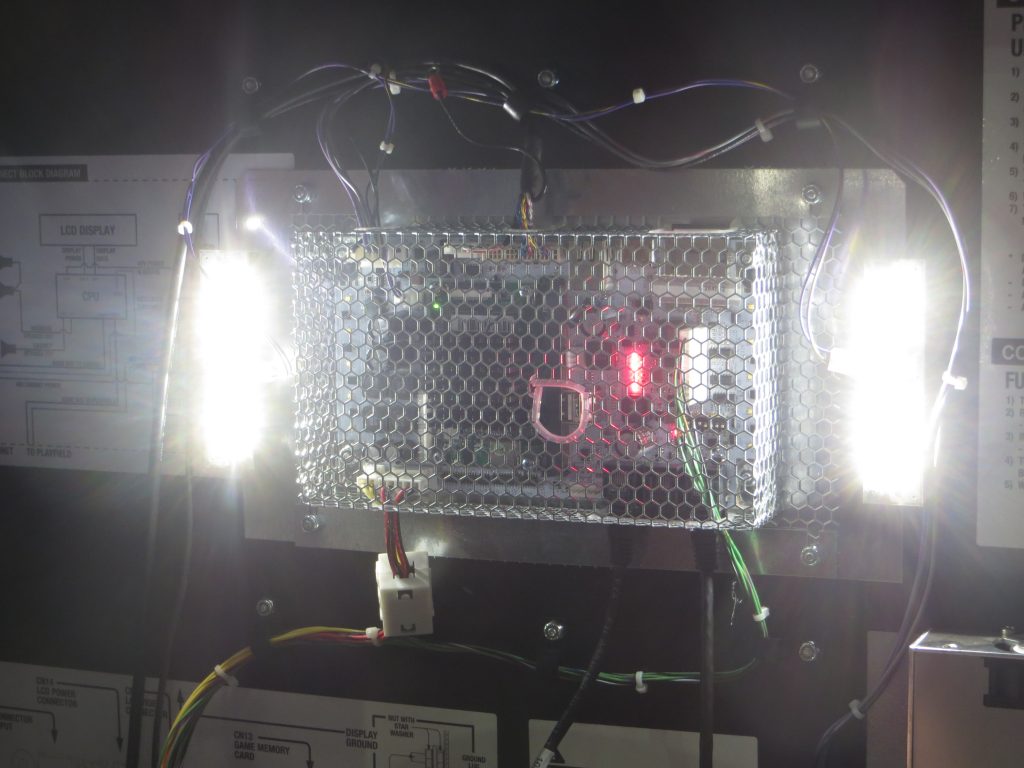 Gary Stern showed how for European games the Spike 2 mainboard in the backbox has to be caged in order to prevent radio signals interfering with the board. Or that’s what I understood. I’m sure Martin Ayub of Pinball News will be able to describe that more accurately. The caging is apparently only required for games operating on 50 Hz.

I had actually traveled to London on Monday in order to interview Gary Stern for Pinball Magazine, but due to huge train delays that interview didn’t happen. As Gary had some openings in his schedule on Tuesday we talked for about an hour over lunch. Don’t expect to read this interview anytime soon as this is just the first part of a series of upcoming interviews that should cover Gary’s career in pinball.

I played both new Stern games in the morning of the show, but wasn’t able to put up any long games on them. Aerosmith seems to have very short ball times (or my flipper skills were completely off). I still haven’t figured out the rules, other than similar to KISS selecting a certain song will highlight certain shots on the playfield, of which in some cases the shots have to be made in order. That turned out actually a lot harder than it seemed. I don’t think I ever managed to play a new Stern game and not get to Multiball, but today that was the case. Batman is of course a different game, but it also plays completely different than Aerosmith. Late in the afternoon I was able to put some longer games on there, but I’ll have to play both game more before I can make up my mind on them. 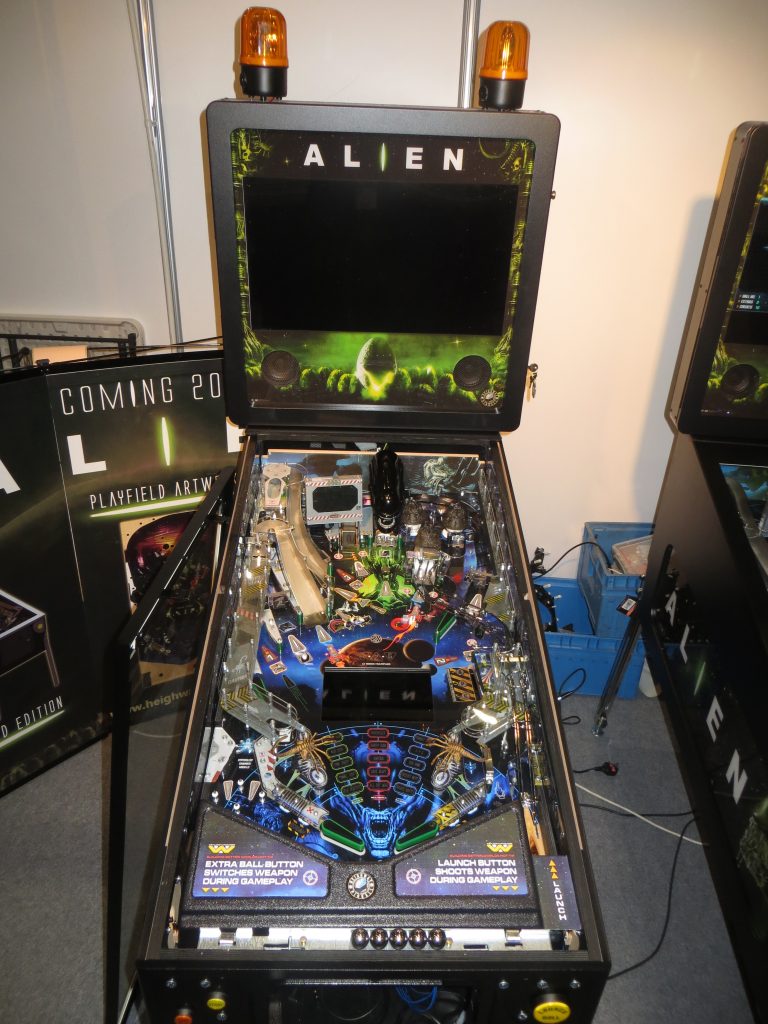 The other present pinball manufacturer was Heighway Pinball, who booked quite a spacious stand at the show. When the show opened on Tuesday morning the company had three Full Throttle games set up as well as two Alien games and if I recall correctly a third Alien playfield lying on the floor under the desk in the center of the stand. The Alien games however were still being worked on during the morning of the show and were removed from the stand in the afternoon. From what I understood backstage techs were continuing to work on the games. While I have no inside info on what the problems were with the games, and I absolutely understand the desire to show playable games, one can wonder whether removing the games from the floor is such a smart move. I was wondering why not just do as Stern did with Batman during Pinball Expo 2016: have the games present, show them so people can see the product and just explain the code isn’t done yet (which probably is true anyway). As far as promotional items goes Heighway Pinball had flyers, banners, promotional plastics and a sticker for Alien available on the desk in their booth, as well as a flyer for Full Throttle. I also spotted a full-page ad for Alien with different ad artwork than the flyer in two industry publications that are available for free at the show. Both the ad and the flyers say the game is shipping now…

Unfortunately these were all the pinball manufacturers present at the show, while there are more manufacturers around and games being worked on. If pinball is going through a resurgence, I doubt regular visitors of this show would have gotten that impression. 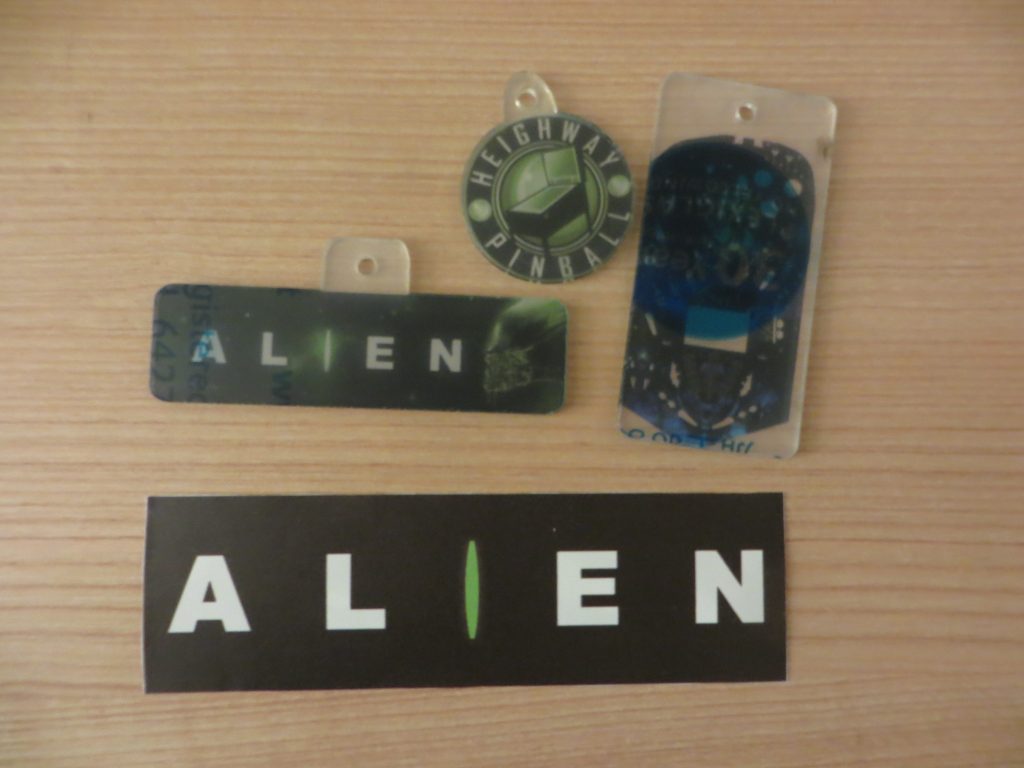 The Tuesday was concluded with a truly memorable evening at a restaurant around the corner of ExCel in the company of Bertjan Postma (Ministry of Pinball), Gerard van de Sanden (Dutch pinball Museum), Martin Ayub (Pinball News) and Ad Jonker (Dutch Pinball Association). The memorable part mainly being the food we ordered either not arriving, or being served twice, and the main chef quiting his job in the middle of the evening. Two bottles of complementary wine and free desserts were offered to make up for all the problems with processing our orders and we got presented a very reasonable reduced check at the end of the night. The food that we did get served was actually pretty good as well.

The second day of EAG Expo Heighway Pinball managed to get a playing Alien game in their booth just before lunchtime. Instantly a crowd gathered to see the new game in action. I was able to play it later in the afternoon when it was less crowded and here are my findings:

The game is very solid build. Software appears to be very far along, if not done. LCD animations and music are very well done. Mechanically the playfield may need need some tweaking as the kickout hole on the left above the left upper flipper didn’t seem to register each hit, but for a widebody it plays pretty fast and fun. The game has four flippers in total and behind the upper right flipper is a hidden lane that feeds to the right inlane in a way that reminds of Williams’ Indiana Jones. The theme is not really my cup of tea, but the game certainly is fun to play. The only thing I have mixed feelings about is the placing of the flipper buttons, as it appears to me my hands are in a less convenient angle than on games by other brands.

I was able to shoot a video of Alien gameplay without the playfield glass on: https://youtu.be/4u6Efb1GG8g.

In the Electrocoin stand the three Stern games held up very well. It may not be said often outloud, but Stern’s games can stand a couple of days of intense playing on such shows without any major issues.  Only Aerosmith seemed to suffer from a mechanical shooter lane issue where the autolaunched ball would bounce back in the shootergroove, or even jump into the right outlane and drain. This is probably an easy fix with some sandpaper and wax, but many players experienced the ball bouncing back.

I was able to play some more Aerosmith and it’s a very fast game. The only break the player currently gets is when then ball is shot in the scoop that launches the ball into the toy box. Other than that the ball is constantly moving, or quickly kicked out. Similar to KISS each song represents a certain color and shots that light up in that color. In some cases these have to be made in order (blinking), while in other modes it appears they can be shot randomly. While the object appears to be easy, it turned out to be rather difficult. I’m also happy to see the ballsave times on Aerosmith are a lot shorter than on some other Stern games from the past. It makes the game more challenging to me. My current verdict: there aren’t really any flaws in the game, but there’s also nothing really standing out. It feels like an improved version of KISS with some NBA, Indiana Jones and Metallica elements. The LCD animations are timed perfectly in sync with the music and everything is working like it should, but it didn’t put a smile on my face like when I played Dialed In! the first few times. Yes, that’s just a personal feeling so feel free to discard it completely.

While the show continues for a third day, day two was the final day for me this time around. With two pinball manufacturers and three new games not a bad score for pinball.