The 10th anniversary edition of the French Flip Expo took place the first weekend of April 2016. As in previous years the show was held in Le Treport, a small touristic seaside town on the Normandic coast. Pinball Magazine had attended this show several times in the past, but had to skip it for the past two years. This year there were no conflicting events so we’re back in Le Treport to report from the show. 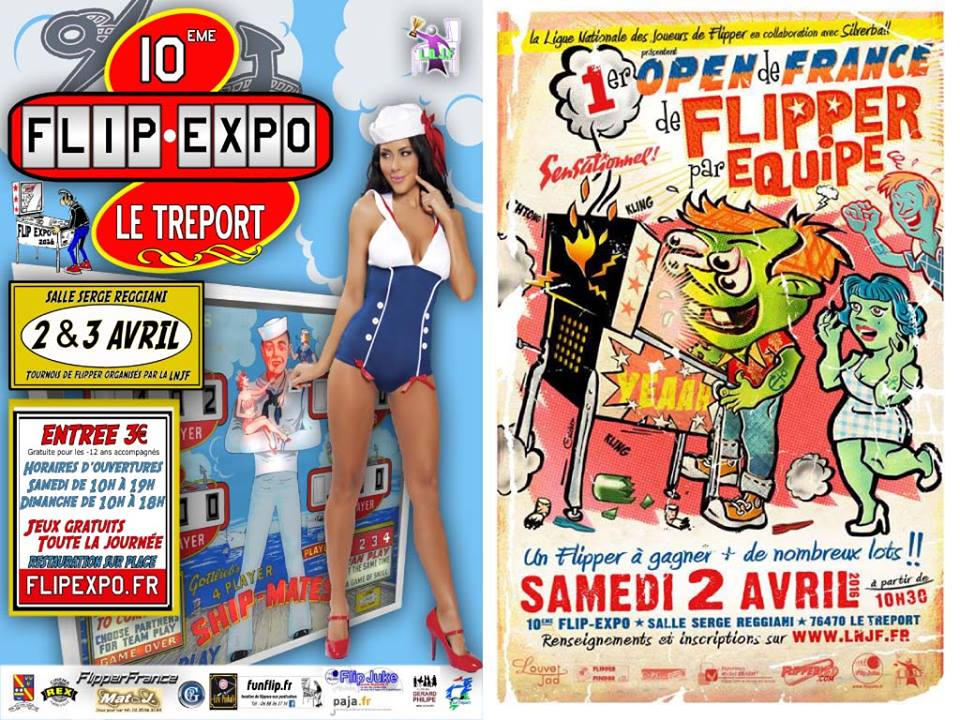 For some reason French pinball shows always have a lot of vendors. Flip Expo was no exception in the past. This year the vendors even got their own room, making the event twice as big in terms of space used at the venue of the event. The hall that was used in previous years is now used for recreational games, the tournament and the kitchen/bar. The vendors are now located in a separate hall left of the entrance to the game hall. 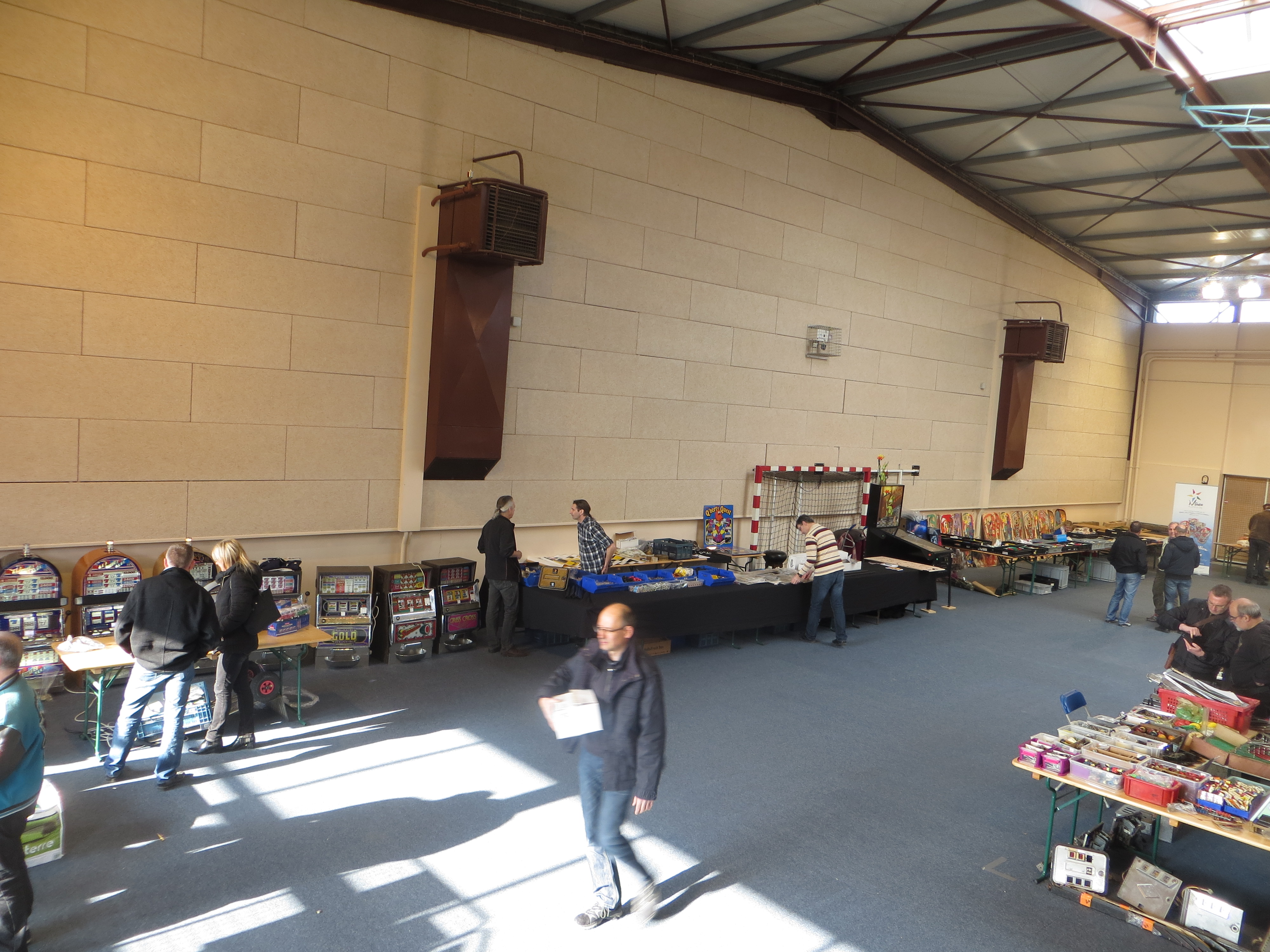 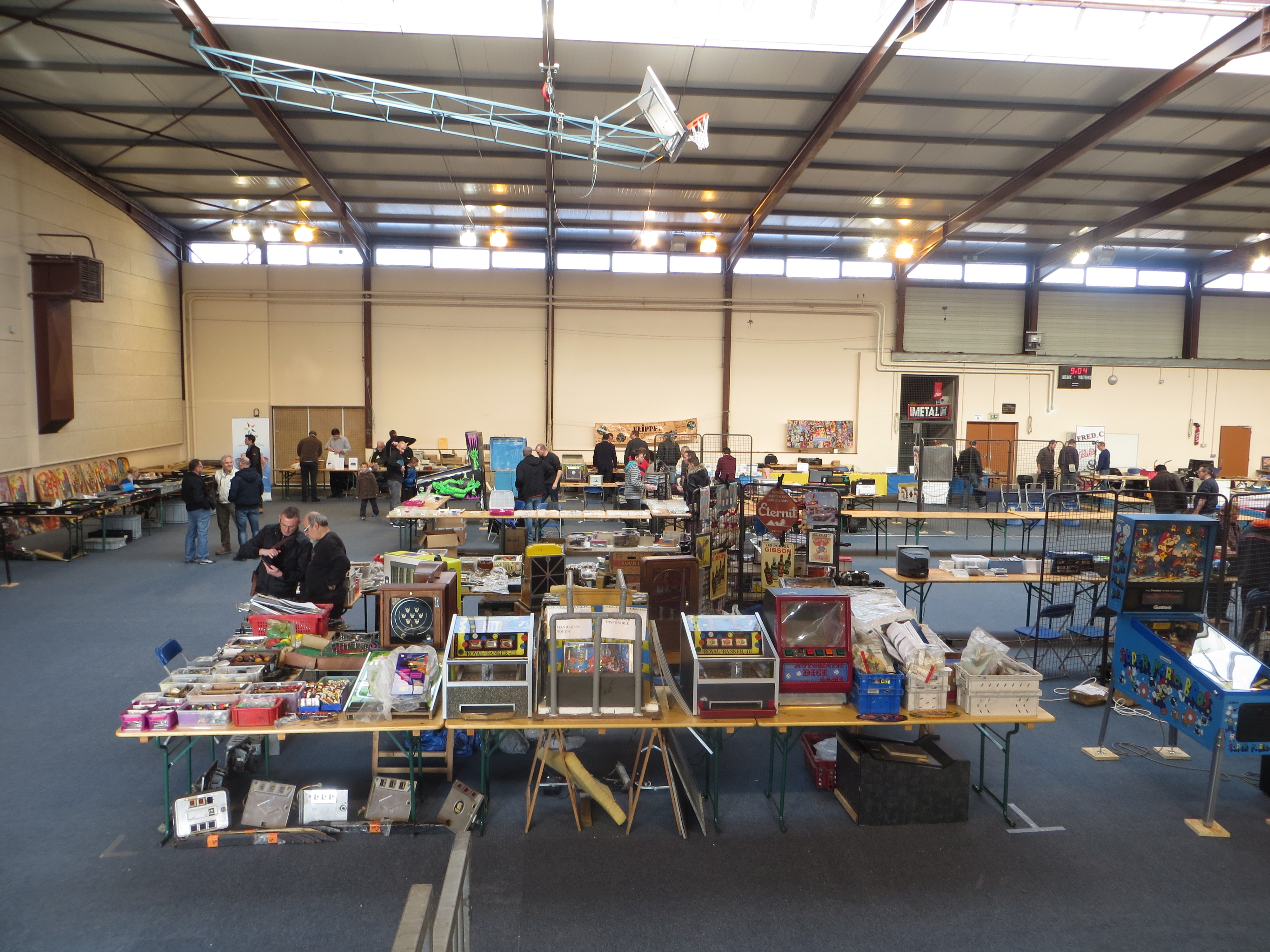 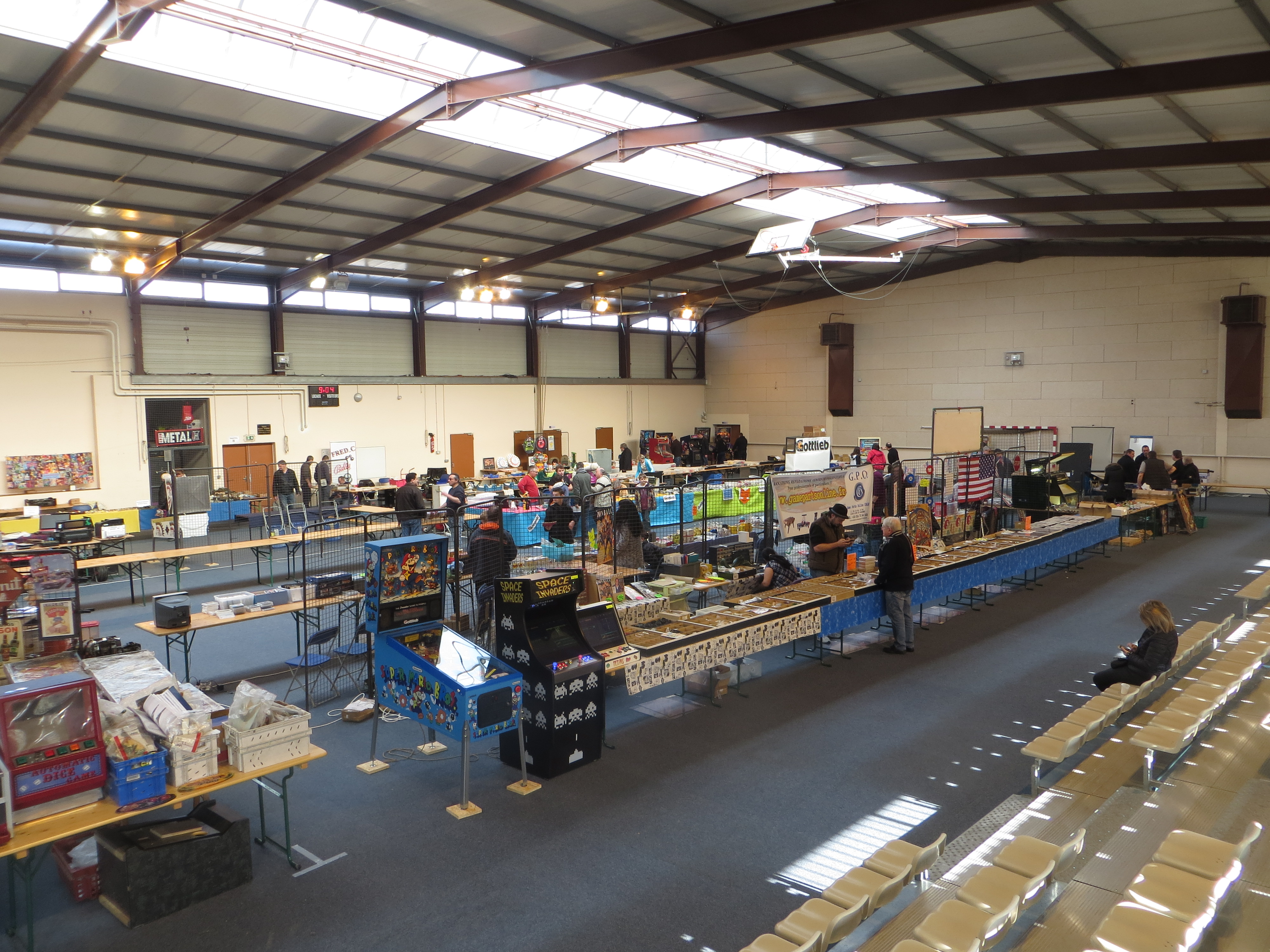 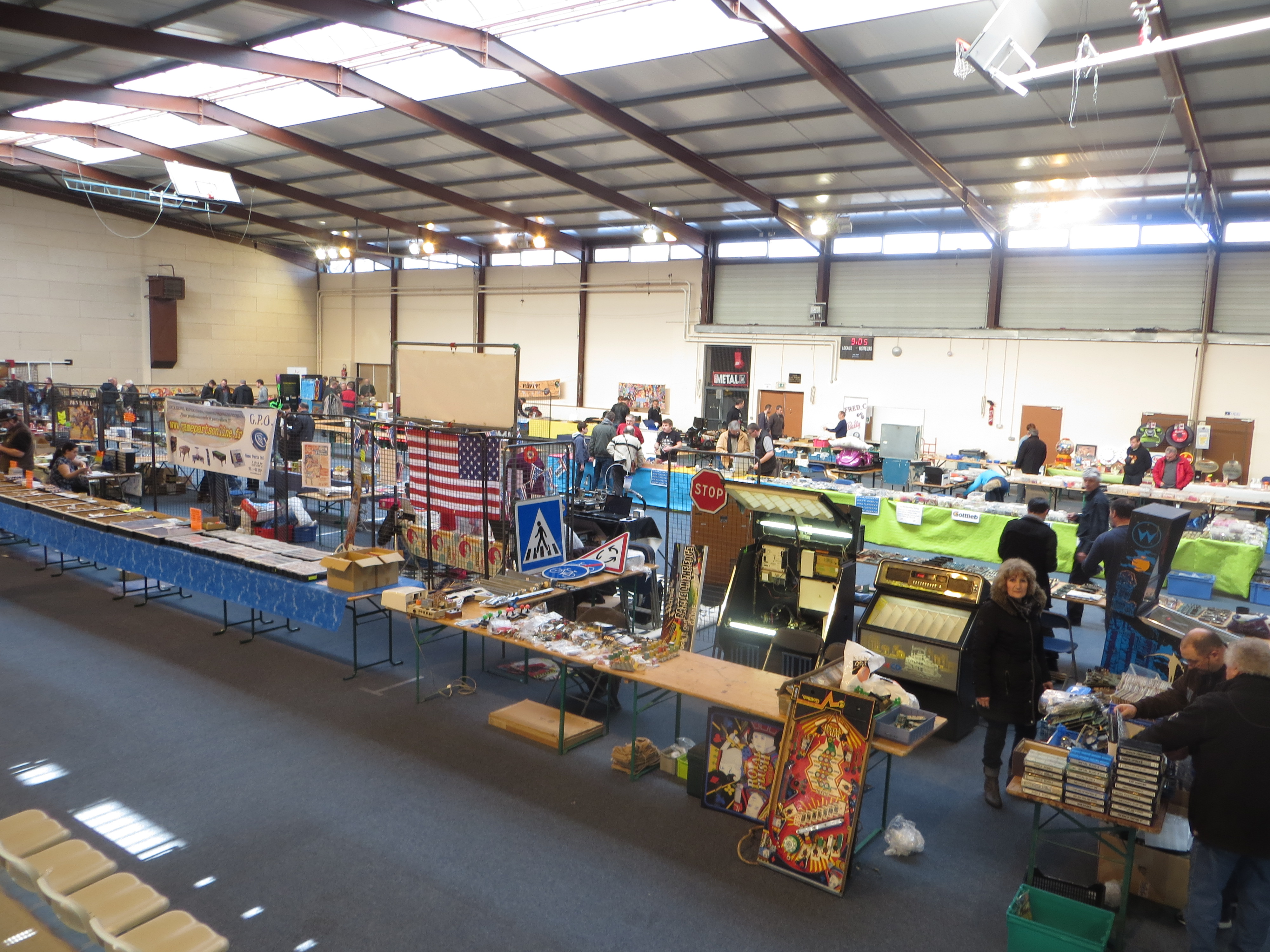 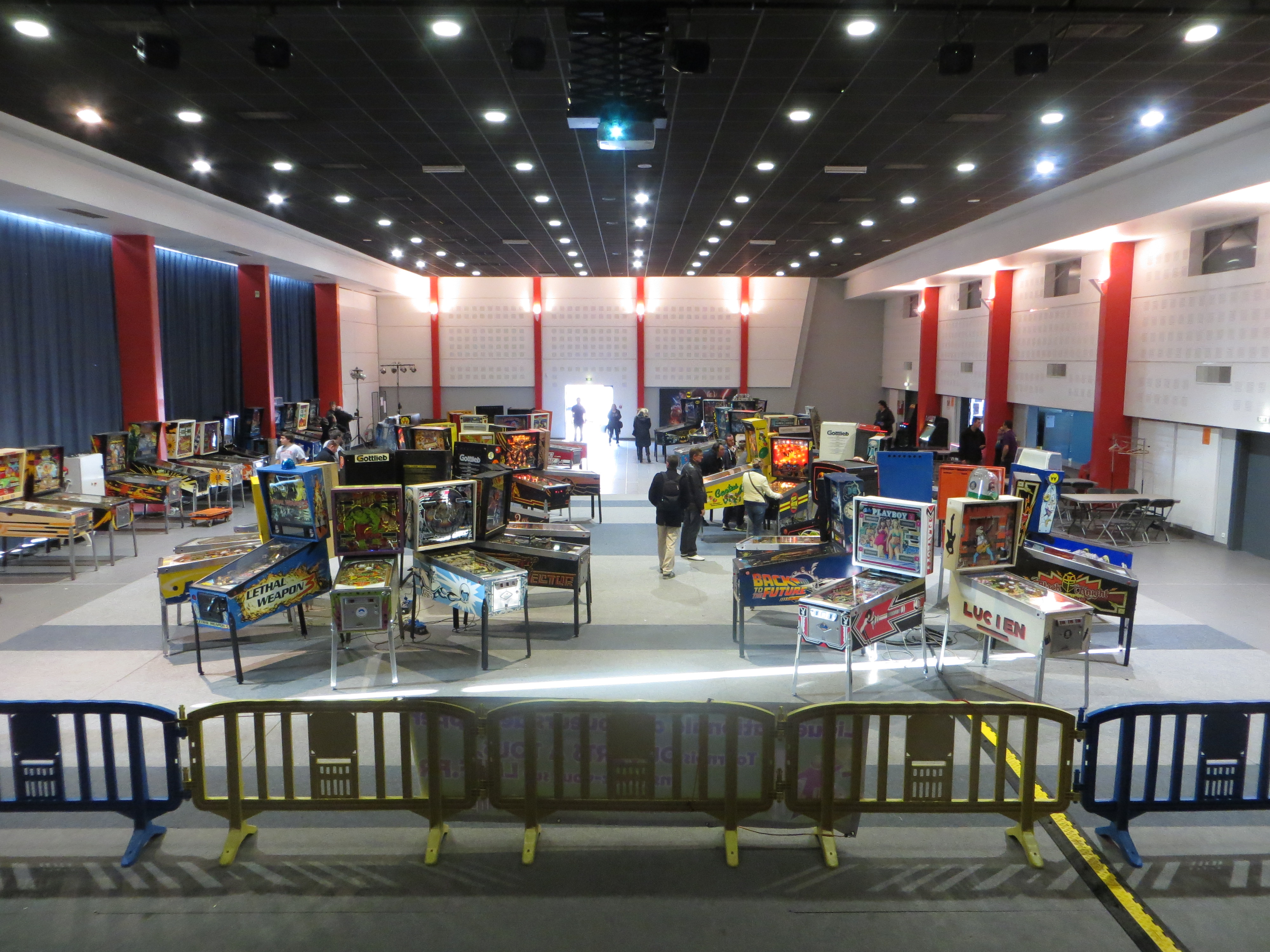 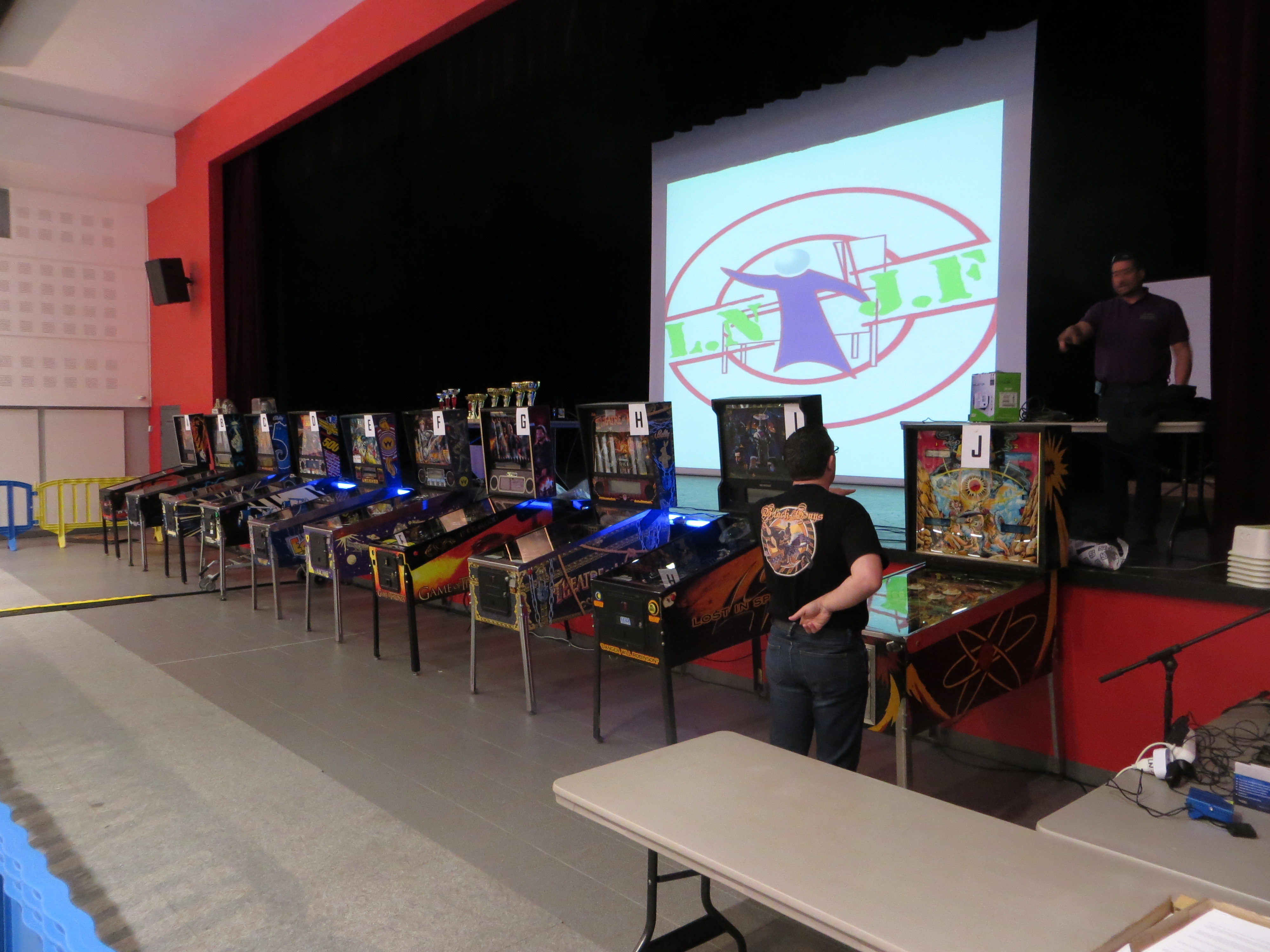 With the vendors having a hall of their own that doesn’t mean there is no pinball to be played in the vendor hall. On Friday night several vendors had already set up their stands, including several games that can be played. Undoubtly the most interesting game to report on is a prototype game built by Christian Petit, the French distributor of Gamecastle. The game is called Olympic Goblin, which is an original theme. It is a single level game with an oldskool layout that reminds of some late ‘70s Bally and Gottlieb games. The playfield is designed to use more or less standard (Gottlieb) pinball parts without any special toys. Currently the playfield features four top rollover lanes, three popbumpers, three drop target banks, two slingshots, two flippers and some additional lanes and switches. 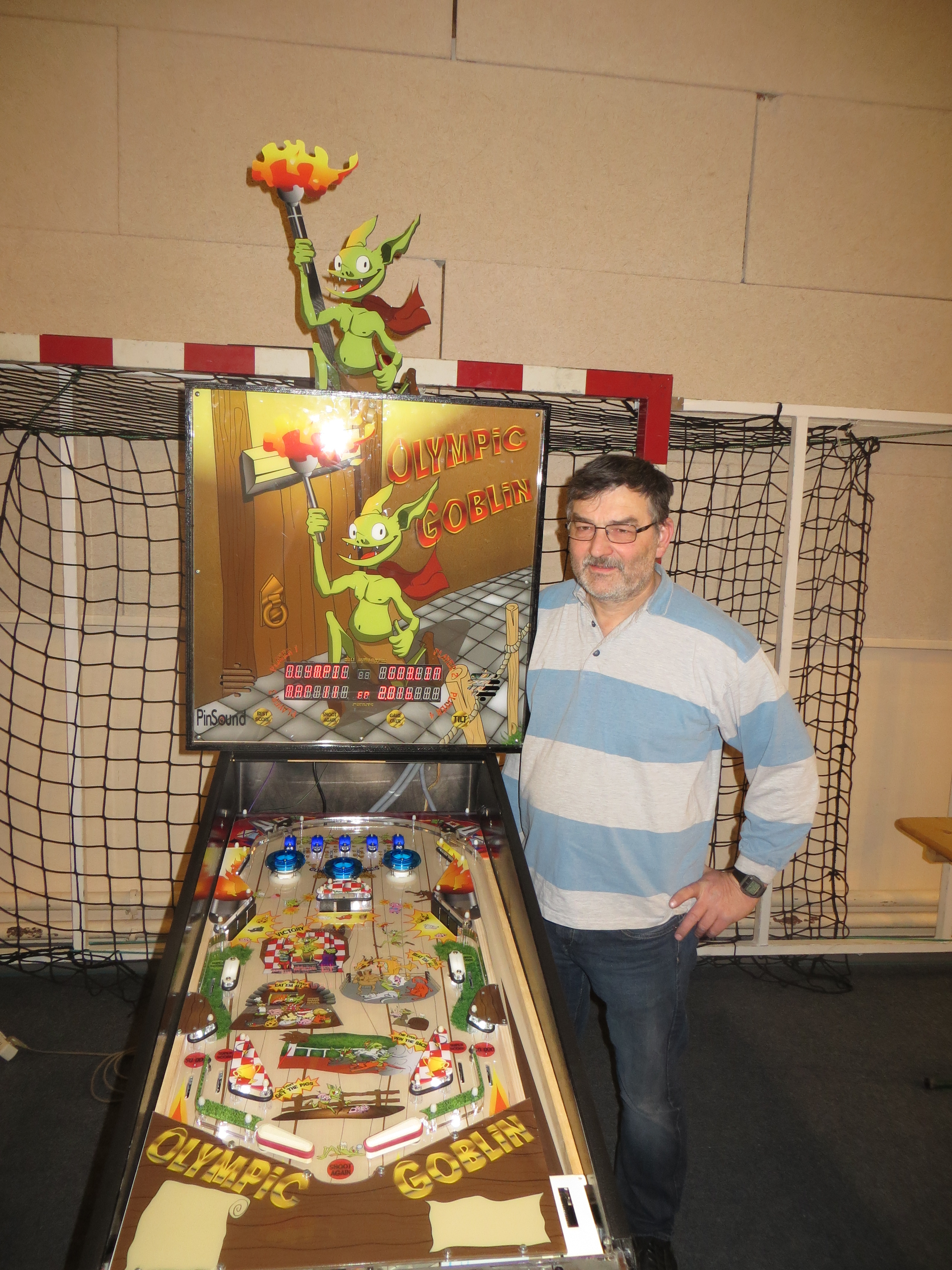 Christian could not emphasize enough that the game is a prototype game and still being developed. The playfield may need some tweaking and further development. The slingshots for example have no kicker currently, just a switch that registers when it’s hit. 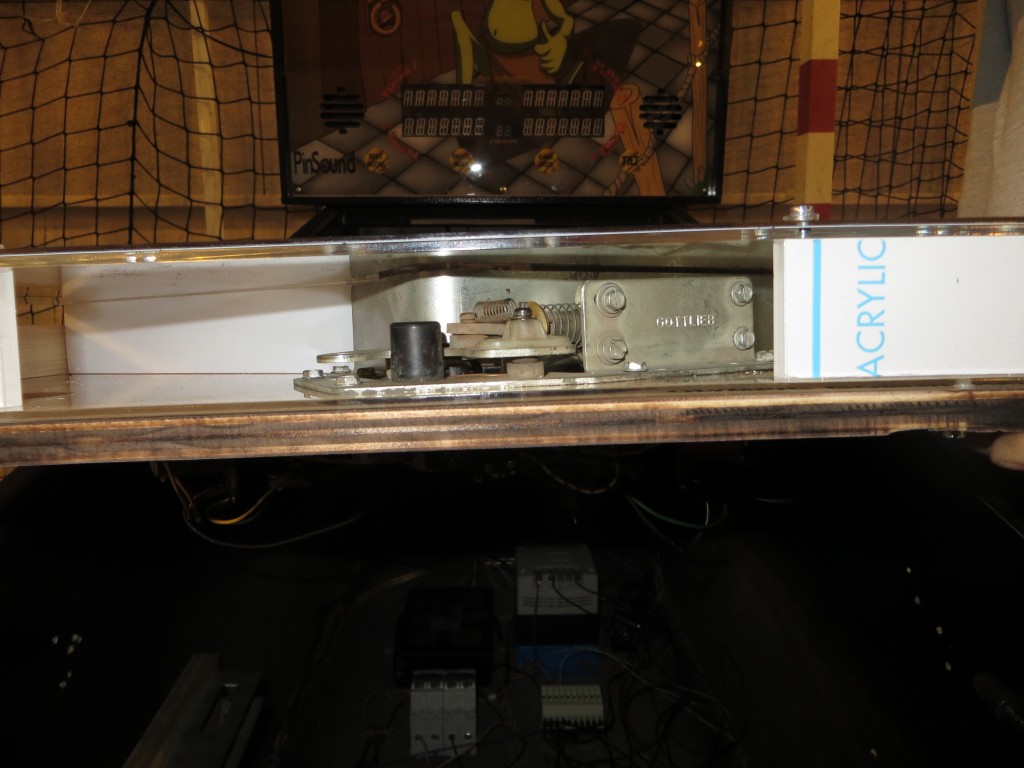 The two layers of the playfield 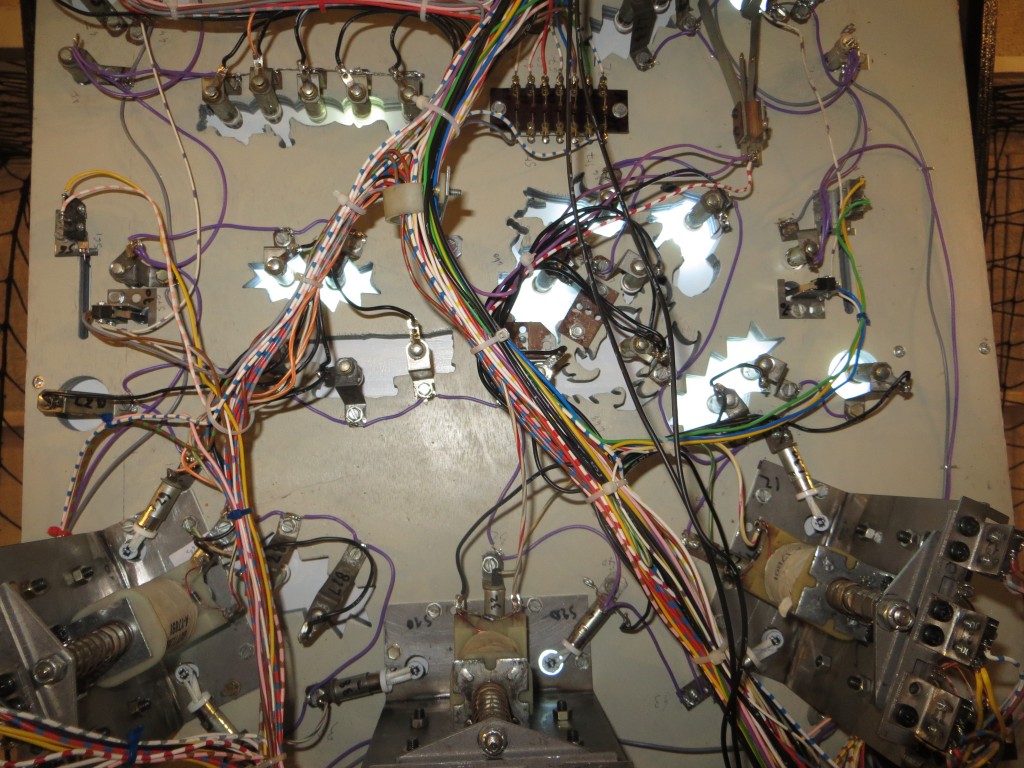 Underside of the playfield with custom shaped light inserts

While the playfield layout may remind of the late ‘70s that doesn’t mean there is no game. In fact the game has several objectives, which are all explained in the playfield artwork. There are four different events pictured, each representing a task for the player: Completing Get the pigs, Win the race, Eat ‘em all and Beat ‘em all leads the player to Victory where Super Score, Special and Extra Ball await. What each task requires the player to shoot is currently not clear, but is likely to be indicated with flashing inserts during game play. 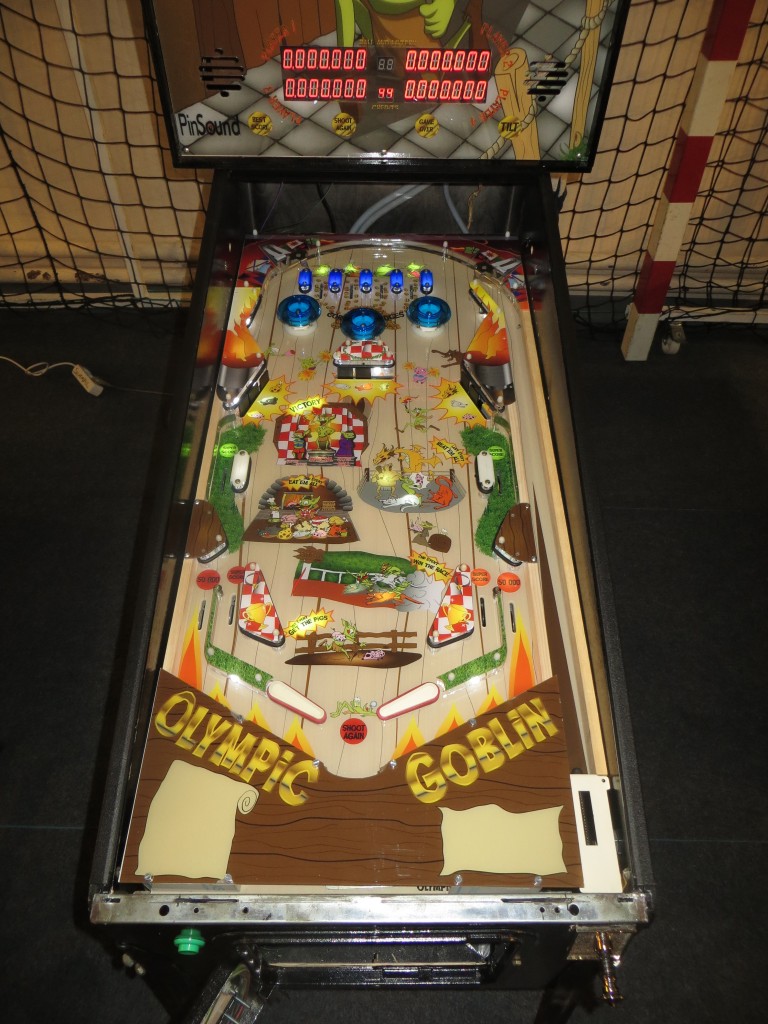 The game will be running on a boardset from Pascal Janin, which normally is used to emulate Gottlieb games. There is a PinSound board mounted in the backbox, but at the moment not wired or implemented. Lastly there is a alphanumeric display that has been designed especially for Christian by Jim from Boston Pinball Company.

As the game uses one of Pascal Janin’s boards to drive and control the game, Pascal was asked about his involvement. Pascal mentioned the game was presented to the public at a show about three weeks ago. At that point is was just an empty black cabinet with the display in the backglass. Although it wasn’t showing much there was already quite some interest in the game. At another pinball show a week later the game had a whitewood playfield with just a few circular holes cut out, the custom shaped inserts were not cut out at that point and there was no plastic sheet on top of it. The past two weeks the game has made a lot of progress as now there is playfield artwork, backbox artwork and even a topper. 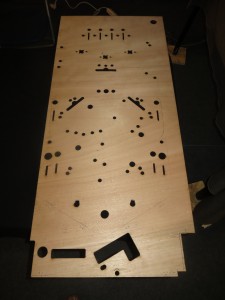 Pascal will be programming the game for Christian. Christian will describe the rules and what the game is supposed to do and Pascal will then apply that into code. The same goes for the integration of the PinSound board. Christian will describe to Pascal and Nicolas and Timothee Manaud of PinSound what sounds and music the game should have where and when. They will then collaborate to implement these sounds into the code of the game. As it turns out they had been talking for years about doing this, but now it’s actually happening. While Pascal is already quite busy with his printed circuit boards, on which you can read all in Pinball Magazine No. 3, he’s happy to be working on this game as well. 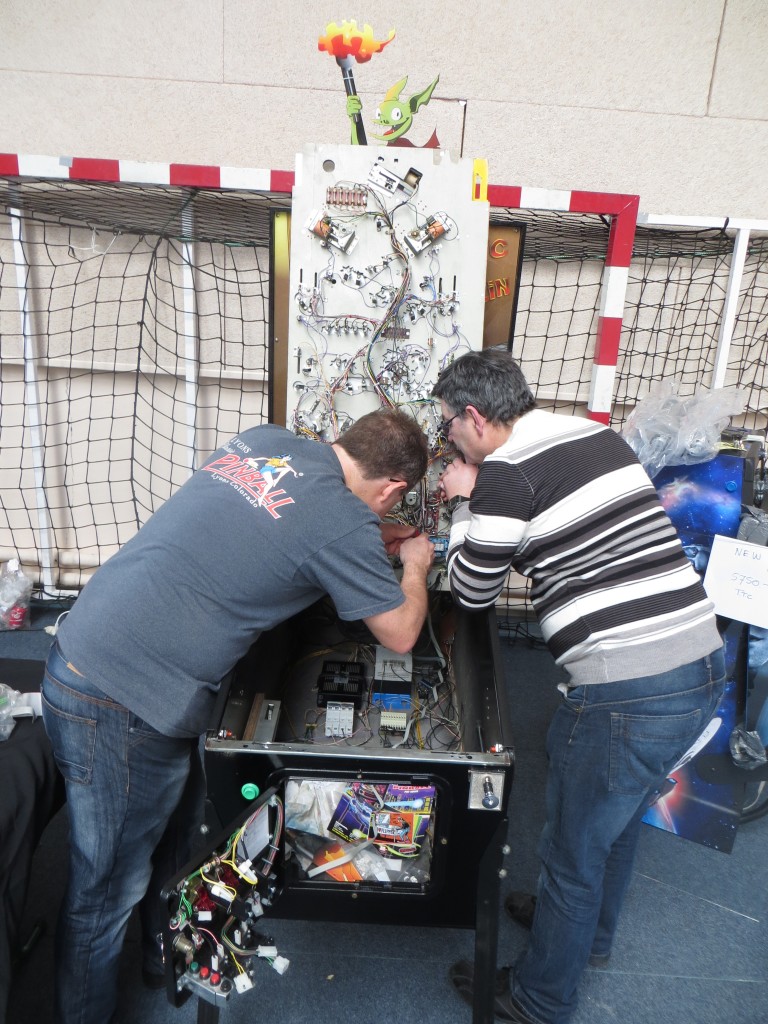 When asked whether this game would be a one off Christian responded that he’s actually planning to do a commercial run and has already invested in a factory where the games should be build! The company will be called Phénix Pinball. A few weeks ago he announced the game on a French pinball forum with a special flyer. If this all works out that means there is another European pinball manufacturer giving pinball production a shot. When asked whether the game would have ramps Christian replied that it would not. But his second game design will have ramps on it. In the mean time Christian set up a special Facebookpage for Phénix Pinball.

During the Flip Expo weekend Olympic Goblin was displayed, but could not be played. Christian was around to show those who showed interest the underside of the playfield and talked about his plans. He also had A5-sized flyers available.

Getting back to the Flip Expo show itself: Even on Saturday morning more games were being brought in. The show opened at 10:00 AM and there was quite a cue of people waiting to get in. At the entrance entry tickets and raffle tickets were sold. To let people in faster tickets were also sold at the entrance of the vendor hall. 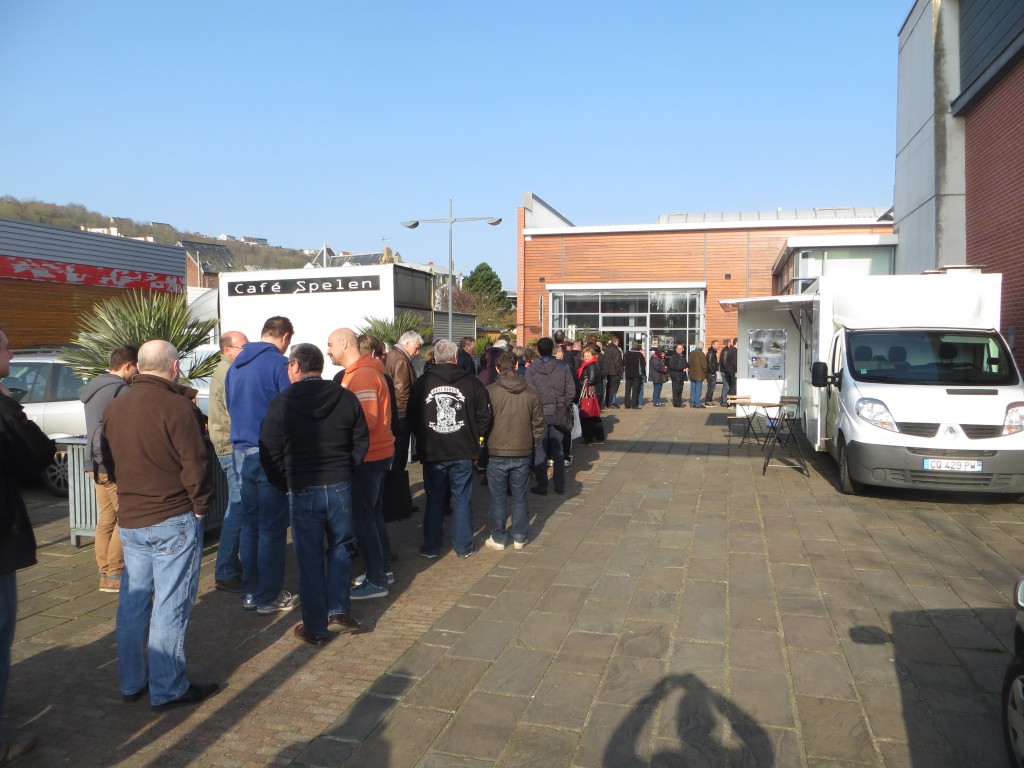 The cue to get in on Saturday morning

In the entrance hall of the game hall was a Batman Forever pinball machine set up. This was the main prize in the already mentioned raffle. Tickets for the raffle cost 5 euro. Entrance to the sjow was just 3 euro, a little more than $3.00.

On Saturday the first French Open for duos was held. Players were competing in teams of two. Each player would play one ball and the last ball would be played together, each player controlling one flipper button. Unfortunately the tournament was already overbooked, so I could not participate. As I was focusing on other things the rest of the day I have no idea who won.

The game setup with the seven islands of games seemed to be working very nicely. While the place was crowded it didn’t feel like it was overcrowded. Waiting times for games were reasonable as well.

In the game hall there was one custom game that needs to be mentioned: a Lucien game. Lucien is a French comic book character. He has been associated with pinball several times and there are even small figurines of him playing pinball. Unlike the previously mentioned Olympic Goblin game the Lucien game was actually a converted Gottlieb Rack ‘m Up with custom artwork on the playfield and backglass. The game even had a Lucien topper. 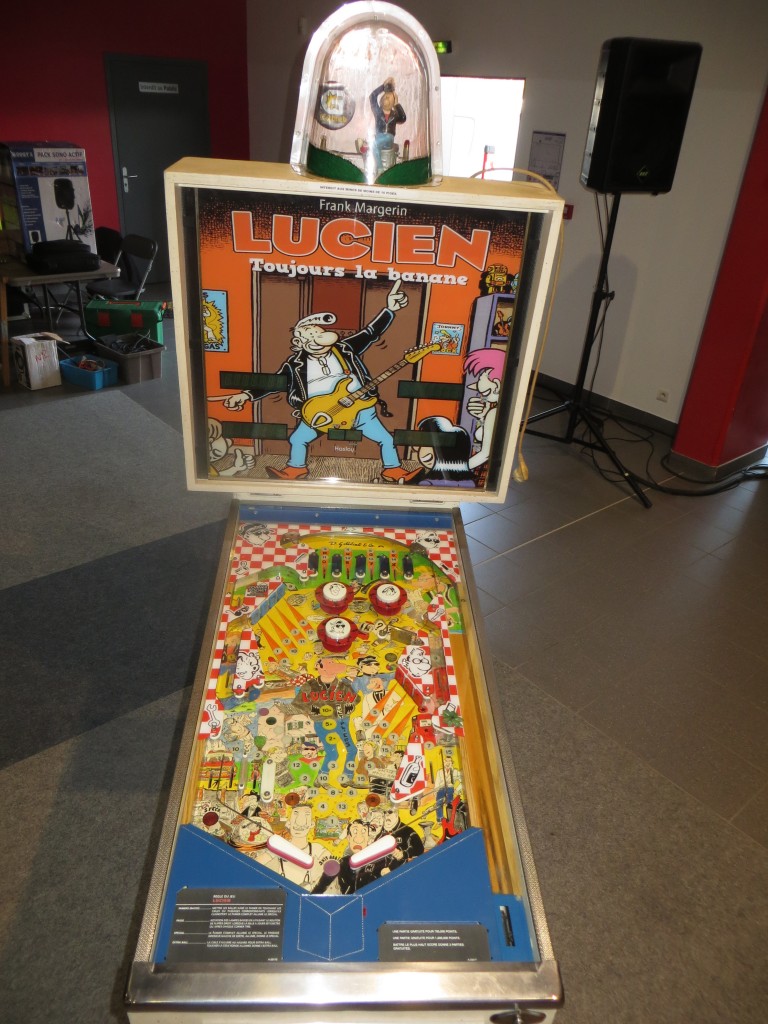 Another game that needs to be mentioned is Space Walk, the 2-palyer player version of Gottlieb’s Count-Down and the last electromechanical game built by Gottlieb. Actually there were two of these. One original, built by Gottlieb, and a brand new one, built from scratch with spare parts. According to the owner Gottlieb only built 125 Space Walks, making his new game the 126th. Below the backbox the game has a little plaque that says Space Walk No 126. As it turns out IPDB.org lists the production run of Space Walk as 215, so this would be number 216, but at the event no-one checked the facts and it was an absolute gorgeous game to see. 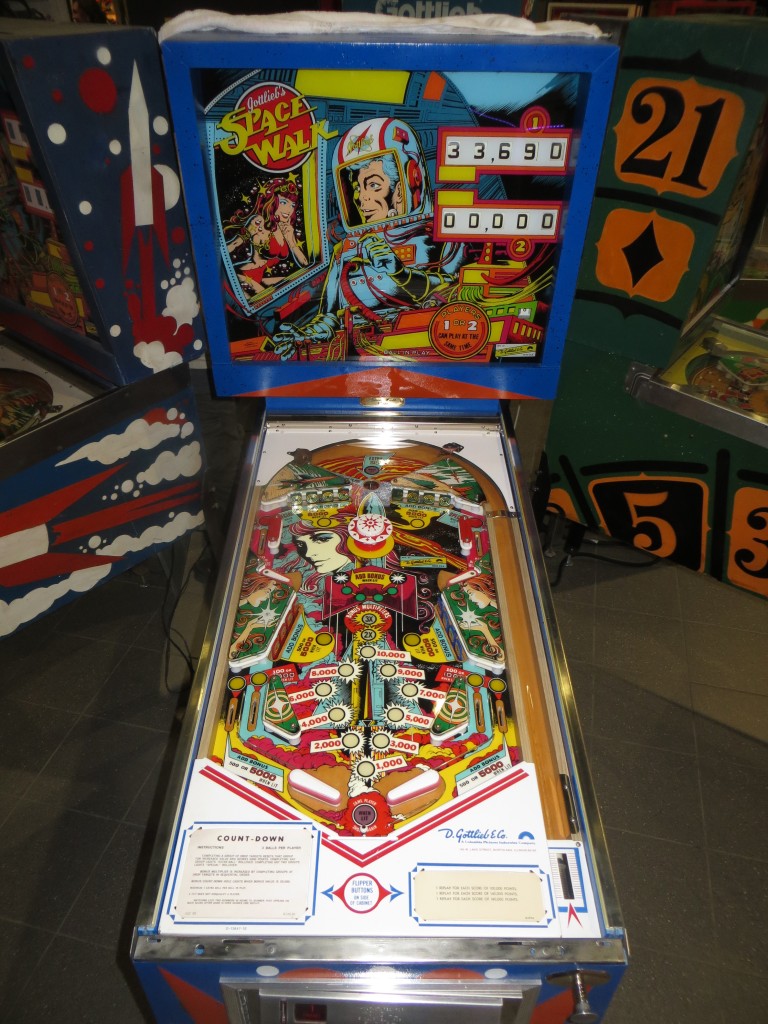 Here’s a complete list of all pinball games at the event: 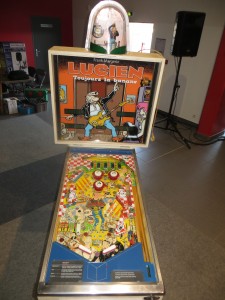 Inside the game hall was also the counter where people could order food and beverages. Prices were very reasonable, especially if you consider drinks in France usually are rather expensive in bars and restaurants. The menu included French baguettes, crepes, croissants, beers and sodas.

On both Saturday and Sunday seminars were being held in a section of the vendor hall. These were mostly technical seminars. Pascal Janin did one on his boards and Doc Pinball did one in which he explained how electromechanical pinball machines work. As all seminars were in French I didn’t attend any as I hardly speak the language, but as far as I could see the seminars were quite popular and draw several dozens of attendants. 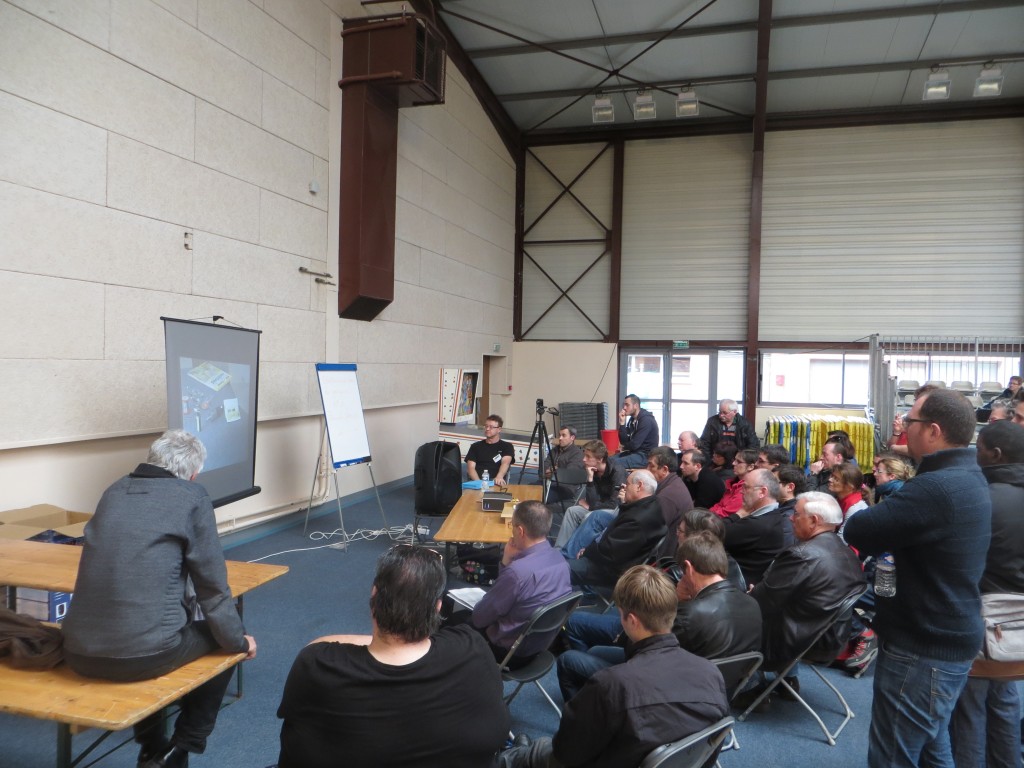 Saturday evening the show stopped at 7:00 PM. Once the visitors left there was a happy hour for those who brought games and helped organizing the show. There was a variety of potato chips, wine and stronger alcoholic drinks available on several tables near the stage. The happy hour was followed by a three course dinner for which tables had been set up in the game hall. After the main course three large cakes were brought in for dessert. As this was the 10th edition of Flip Expo Frank Michaux, the main organizer of the show, was thanked for his efforts and was handed a special award featuring Lucien, a French comic book character. After saying a few words of thanks Frank opened the dessert buffet. Not long after that the games were turned back on, allowing those in attendance to play until about 1:00 AM. 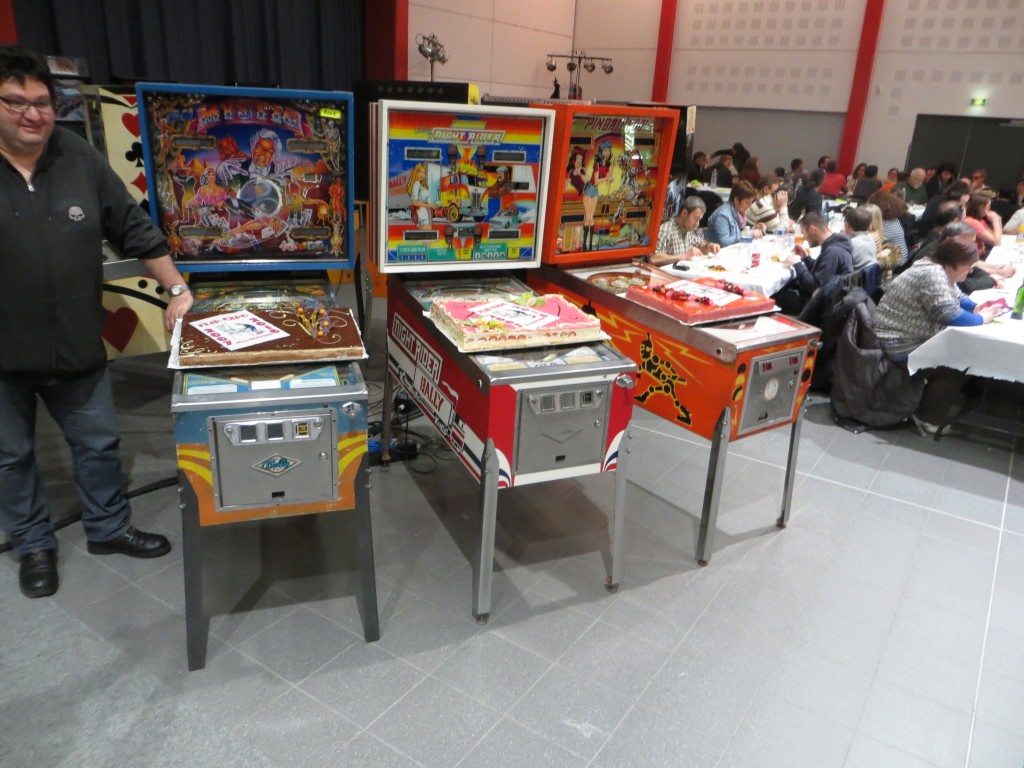 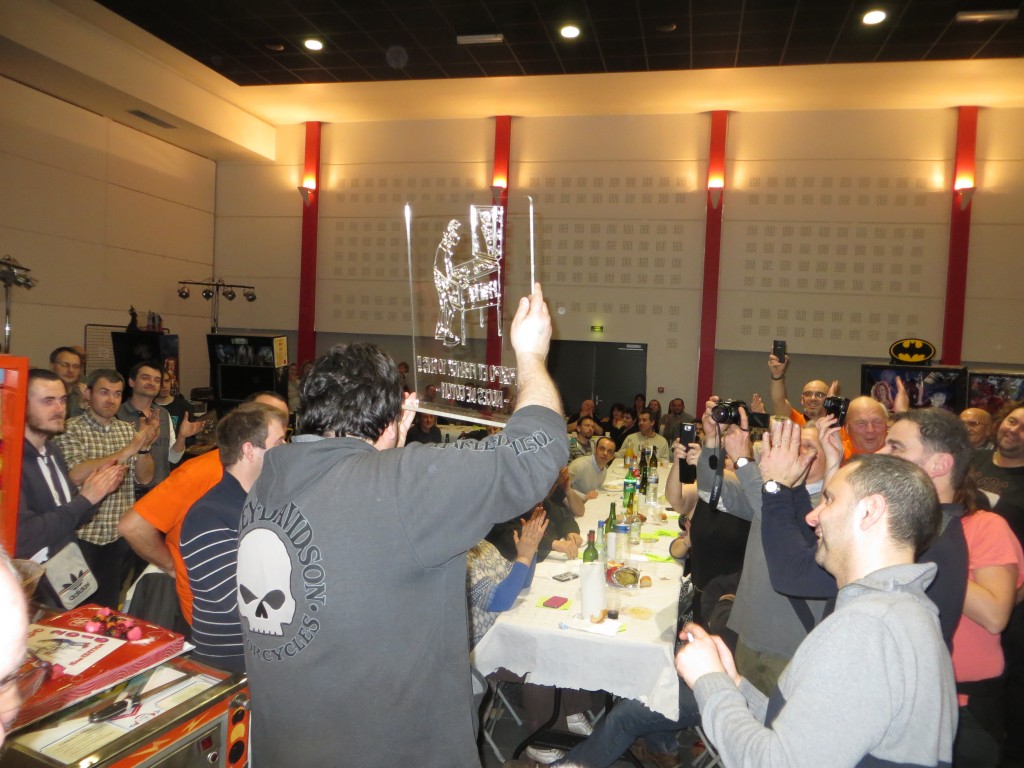 Franks holds up his award

The Sunday seemed as busy as the Saturday. Only a few games had been removed from the line up due to them either being sold or not working properly. There was another tournament. This time for individual players. The final was played on a Gottlieb Time Line, which was randomly picked from all available tournament games. This was a four-player final, which was won by Frank Bona. After the final the show was over and the games were being packed up.

In conclusion I can only say this was another great edition of Flip Expo. The games present seemed to hold up well. Not all of them were working, and some of them were in better shape than others, but that’s the case at any pinball show. The addition of the separate vendor hall seemed to have worked out well for everyone. Most vendors were happy not to be in the noise of the game hall all day. The number of visitors was also good, which makes the 10th anniversary another successful edition of Flip Expo.