In their VIP newsletter of of February 3rd, 2016 Dutch Pinball invited their VIP customers for a factory tour in the facility that will be manufacturing Dutch Pinball’s The Big Lebowski pinball machine. Dutch Pinball has no factory of their own, but they teamed up with a party who can manufacture some of the parts and assemble the entire game. So it was off to the village of Aalten in the east of the Netherlands on Friday February 12th. 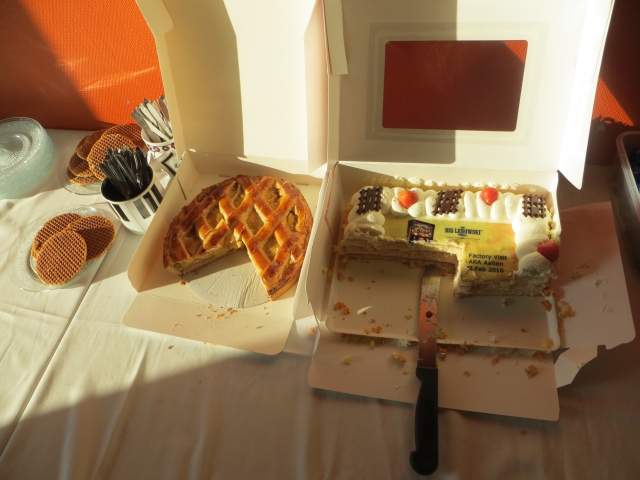 Upon arrival coffee, tea and cake was waiting to welcome guests in a small room in one of ARA’s buildings. Except for programmer Koen Heitzel (who arrived later) almost the entire Dutch Pinball team was present. Among the guests were also some ARA personnel who will be assembling the games. Jaap Nauta later explained to me that they want these people to familiarize themselves with pinball and the customers of DP to get a bit of a feeling for the product and its customers. 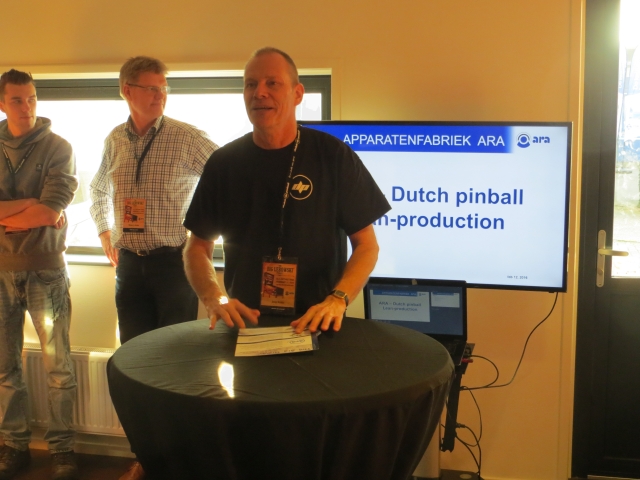 The ARA company is located at a small industrial area and is housed in several large buildings all close to each other. In the same room were also four early sample games of The Big Lebowski set up and available to play. Once everybody was in Dutch Pinball’s Jaap Nauta welcomed everybody and then quickly introduced Walter Ter Brake, ARA’s Operations Manager, who took over from there. 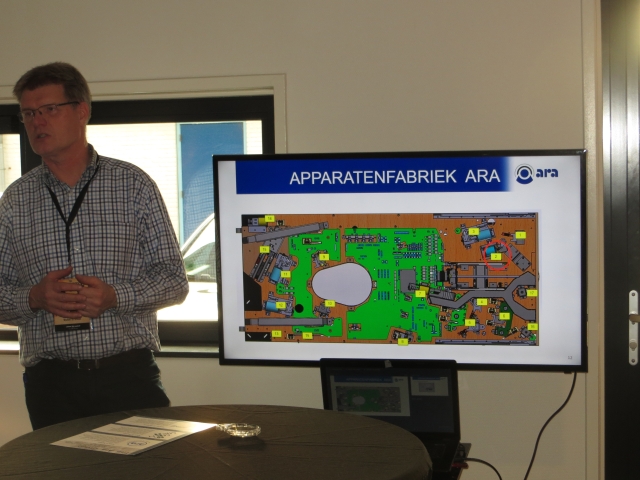 Walter explained a bit of the background of the company and how they set up their facility to streamline the production and assembly of The Big Lebowski. ARA is actually working for other companies as well, ranging from suppliers of medical equipment to machinery that is used in chicken farms to check the quality of eggs. Later during the factory tour it turned out that ARA has developed some leading edge technologies for their customers, but while such technology would be very interesting for competitors they usually work exclusively for one company in the same field of operations. The same goes for pinball: if another pinball manufacturer would be interested in ARA’s expertise, they would turn them down as they already work for Dutch Pinball.

Getting back to the presentation inside, which was recorded by NFV’s Rensch Hooijmaijers, Walter introduced a few ARA employees who have been working on this project and/or will be part of the assembly line. ARA has actually been quit involved in the research and development of The Big Lebowski, including the layout of the large printed circuit board (PCB) under the playfield, which we’ll get to later on.

ARA’s target is to eventually manufacture 4 games per day. They will build up to that with the first weeks producing a lot less games and then slowly increase production each week once they become more experienced. Their goal is to as efficient as possible, streamlining workflow and keeping just enough parts on hand to keep the production going, without having a huge inventory taking up space in the factory.

On the factory floor several areas are dedicated to different tasks. Similar to Stern Pinball there’s the cable assembly section. Right next to that is a larger section for module assembly. Here various components that form an assembly part are put together here, so it van be fit onto the playfield as one part.

ARA has their own in-house production of printed circuit boards, which is housed in a separate area on the factory floor where only certified people are allowed in, wearing special antistatic clothing. The whole process of making the PCBs is automated and certified according to certain ISO standards.

Walter then went on to explain how they came to the final bill of material for the game and how they streamlined the assembly of the game. After answering some questions the guests were then split into two groups that went on to tour the factory separately under guidance from Walter and another ARA manager.

First stop in the factory was the area where all sorts of steel plates are lasercut and bend. There’s actually quite a lot of steel plate material being used in the game: the subway ball guide, the apron covering the ball trough, the bottom of the bowling alley assembly, the ball guides in the bowling assembly and more. There were crates with some of the above-mentioned items on the factory floor. On a large steel bending machine parts of the aprons were being bent. The machine was set up to do two different bends. An employee places the apron with the part that needs to be bend in the machine and then de machine bends it 90 degrees. The apron is then positioned differently to bend a different part. This process is repeated until the apron has its final shape. Note that at this stage the aprons have not been painted yet. 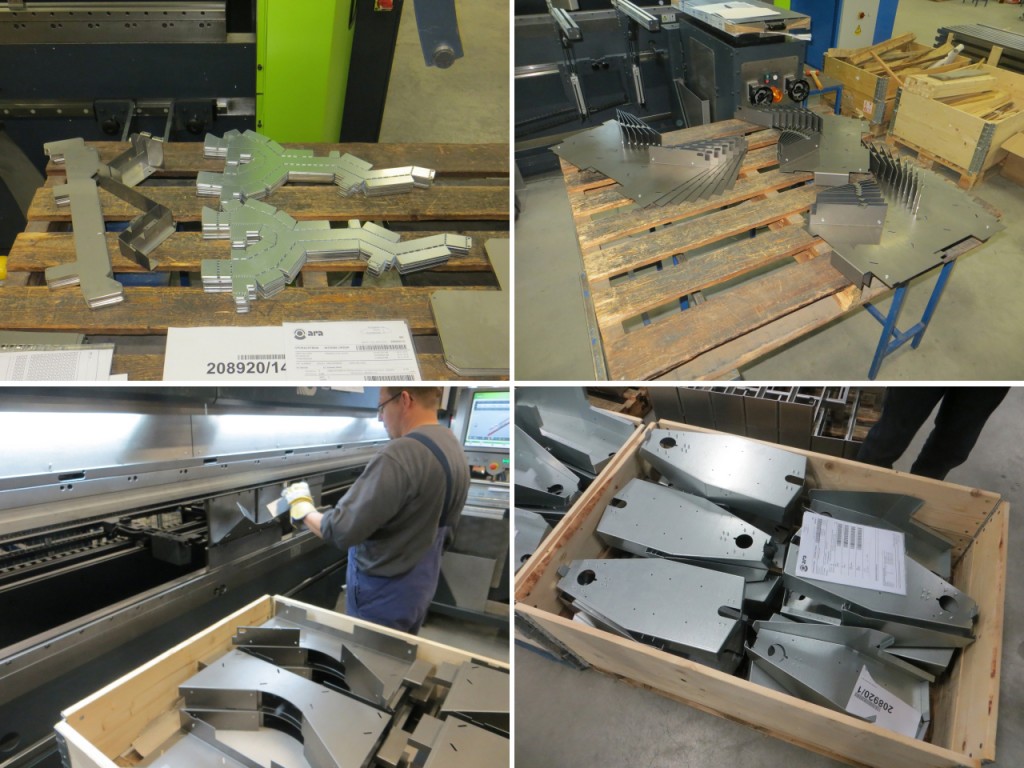 Walter then took the group to various other sections in the factory, like the stockroom and the (not accessible) PCB area. He was passionately explaining how they streamlined the process of getting parts to engineers and such. Not everybody seemed to be interested in this, but it’s great to see the pride Walter is taking in how the factory is being run.

When we got to the section where the TBL playfields are being assembled Walter had difficulty keeping the group together as everybody started wandering around. Those who stayed with him heard him talk about how all parts were grouped for pre assembly and assembly on the playfield. On the outside of this section all sorts of parts were kept in small stock to make it easy to grab them and assemble them on the playfield. Inside this section four rotissary workstations were set up, where on each station the playfield is assembled up to a certain point. Aside from all the game specific parts there’s also all sorts of screws, nuts and bolts to be found here. 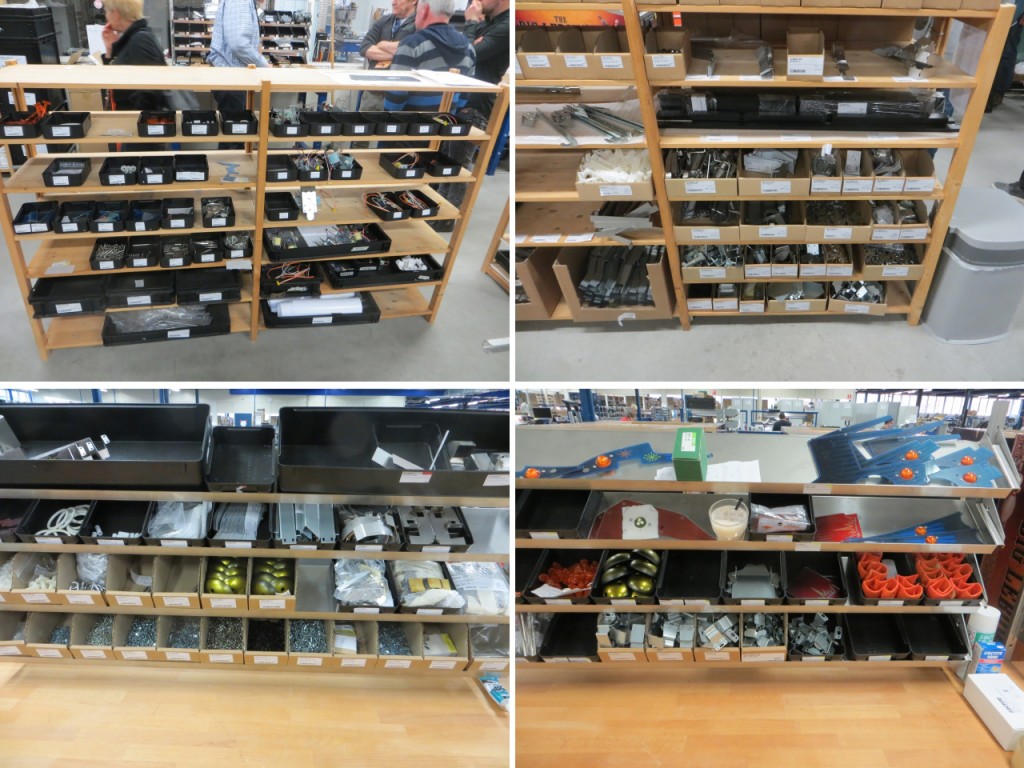 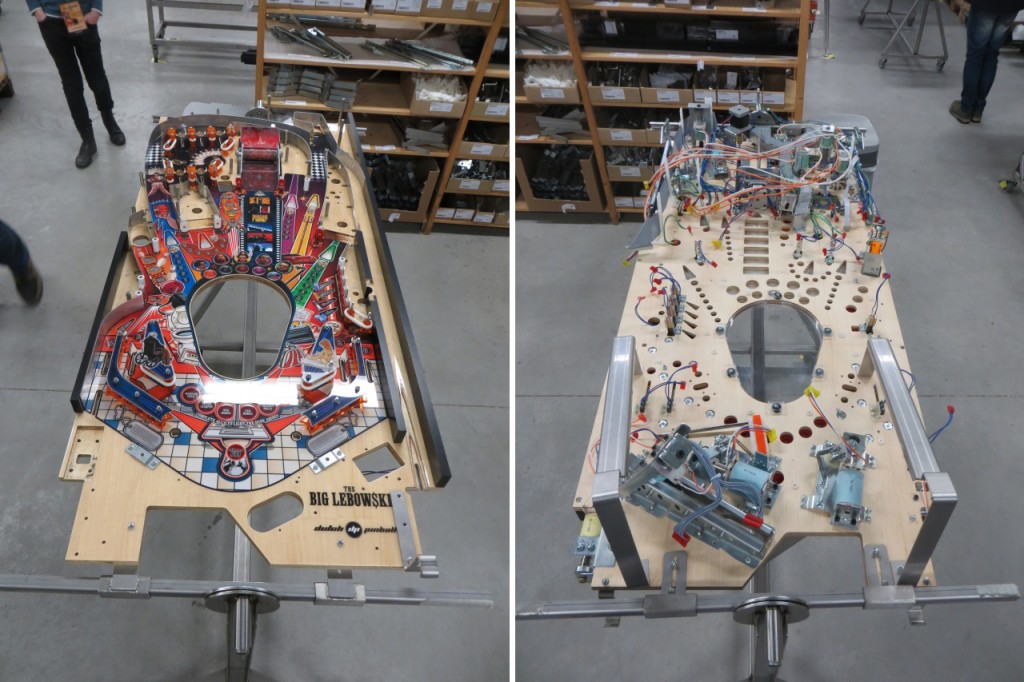 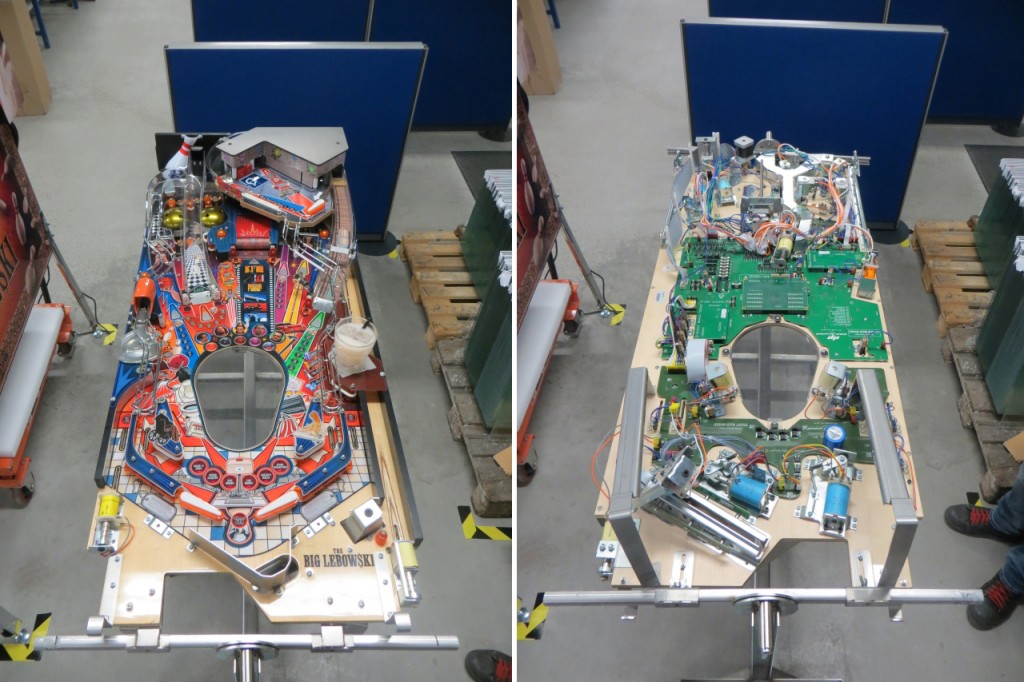 An almost completed playfield at the end of the line

Next to this section was the area where the cabinets are wired and put together. The cabinets come in from a separate manufacturer as empty wooden cabinets. I may be biased here, but the quality of these cabinets looks very solid and impressive. While most currently sold games are likely to go straight into private collections, the look and feel of the cabinets gives the impression these games can take a beating when played on commercial locations. The materials used in the cabinet, ranging from fans to speakers, to lockbar mechanisms, also look very solid and of high quality. There’s no way anyone can accuse Dutch Pinball of cutting on quality. 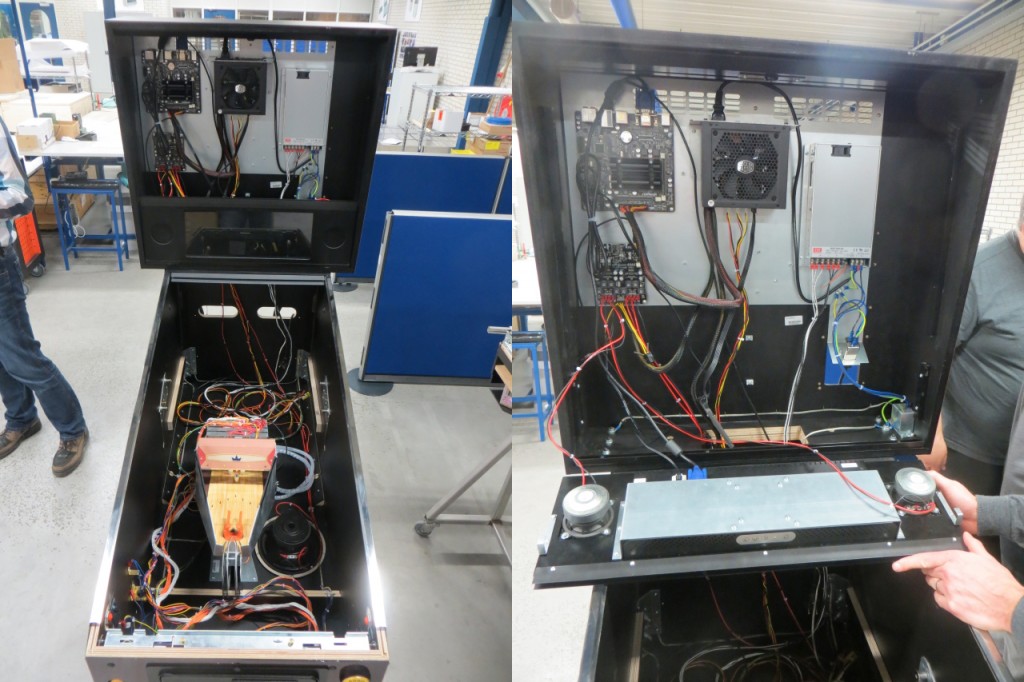 Although there’s quite a lot of new technology used in the game and on the playfield, it was surprising to see how much wire still is used inside the cabinet. A lot of that is used on the bowling mechanism.

While Walter had lost most of the group he did continue his tour to the nearby office area where the engineering of the PCBs had taken place. All the PCBs in the game are assembled at the same time on a big sheet, which is eventually cut into the various boards. 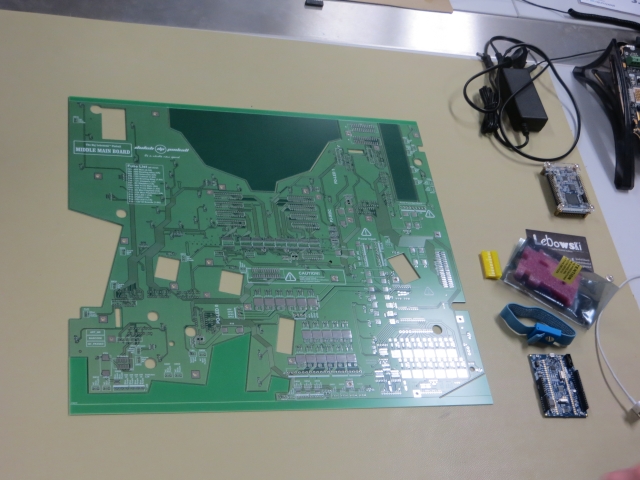 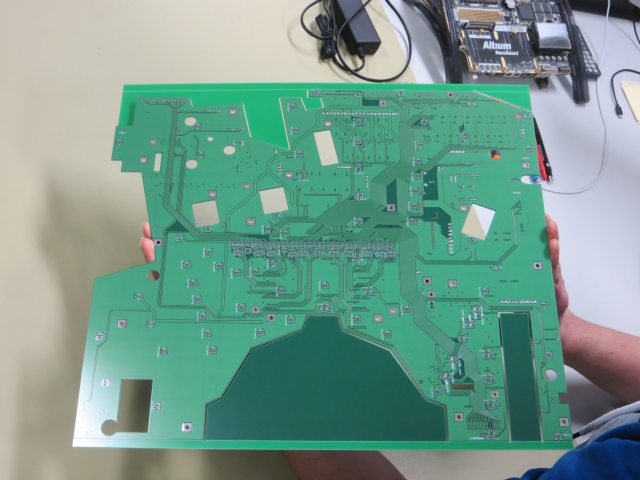 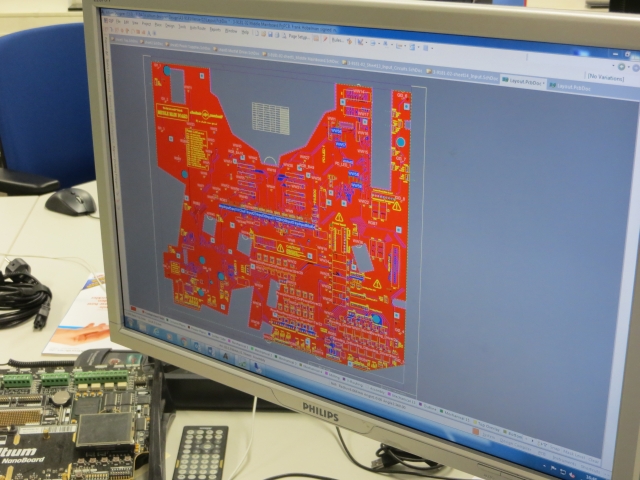 The PCB on the computer 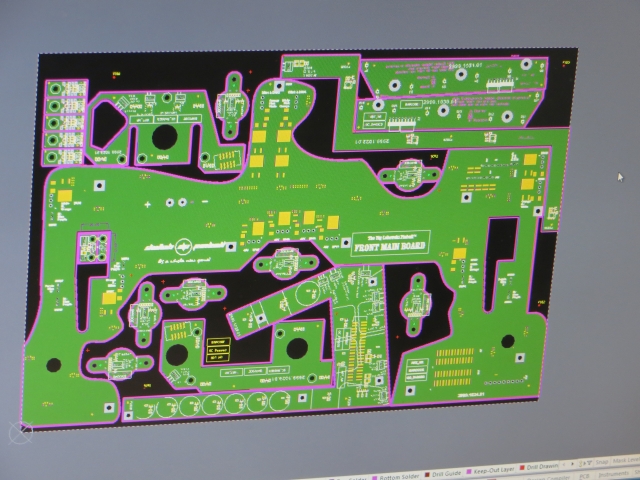 The sheet layout with all the smaller PCBs

An unpopulated large main PCB, the big one that goes under the playfield, was shown, as well as how it was arranged on a computer. This main PCB turns out to be a four-layered PCB. If I recall it correctly the higher voltages for flipper power and such are in the inner two layers of the board. The PCB uses quite a bit of microelectronics. Knowing how many operators (and pinball owners) prefer to be able to fix boards themselves that raised the question whether operators will appreciate these boards on which they can’t fix problems themselves. Dutch Pinball and ARA have kept that in mind as you don’t want to send a new board in case a coil freezes and fries up a few components on the board. From what I understood there are ten MOSFETs on the board, but not all of them are used. In case one of them fries, which I was made told is highly unlikely as that is protected in other ways, the owner can then contact Dutch Pinball who will send him new software in which a different MOSFET will be used. So no need to replace the main board at that point. 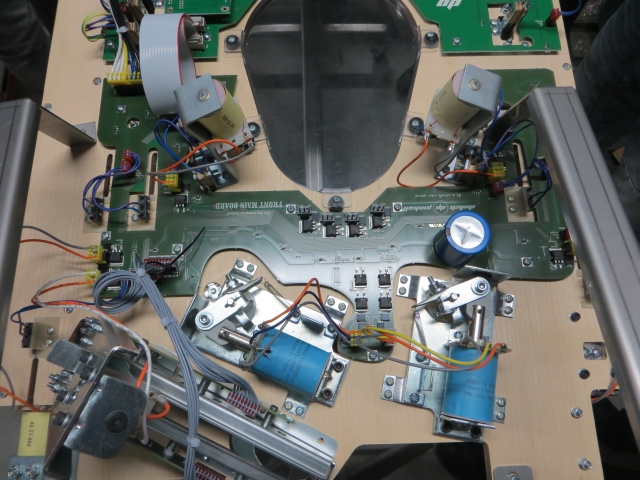 The PCB near the flippers with extra MOSFETs

After that both groups headed back to the building across the street where the games were set up. In style with the movie there were white russians available, as well as some salty snacks. All four games where being played all the time. In the mean time Dutch Pinball had sent out a newsletter in which they announced that Roger Sharpe, who stepped in late 2013 to help out with the licensing of the game, had managed to permission for the use of all essential elements from the movie. This was something that up to a week ago was heavily restricted, but that’s no longer an issue now. As a result some new clips were already available on the present games. 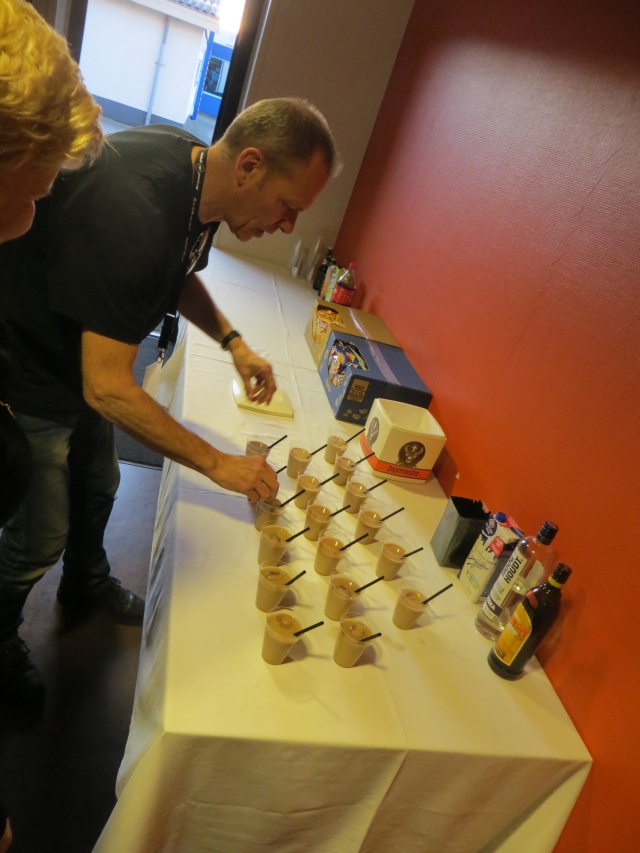 There had been some issues with the rug mechanism, but that appears to be solved as well. Only one of the games was equipped with this improved version, of which I don’t know the exact details, but it seemed to hold up fine the entire event. 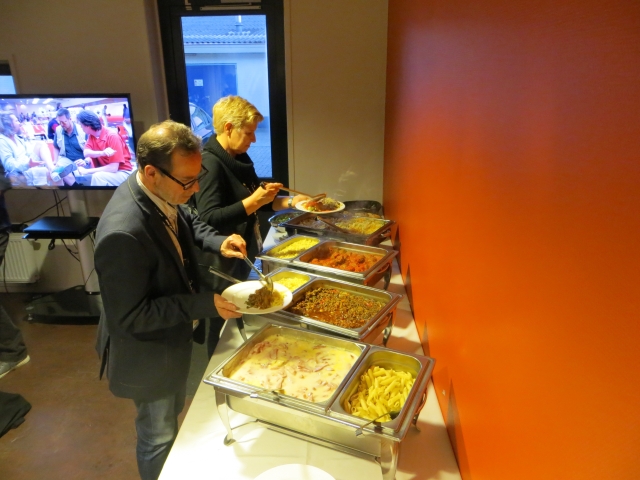 Around dinnertime a local caterer arrived with an Italian pasta buffet with three different types of pasta and meat. The games kept being played nonetheless. Once people started leaving it turned out Dutch Pinball had a small present for each VIP in form of a backbox translite of the game, which was much appreciated. Around 9:00 PM the last VIPs left, concluding the event. 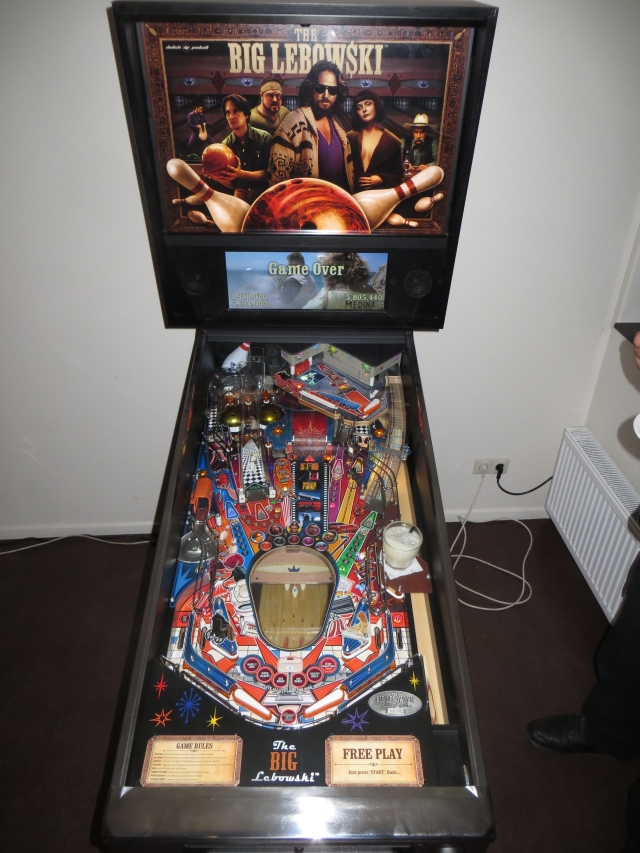 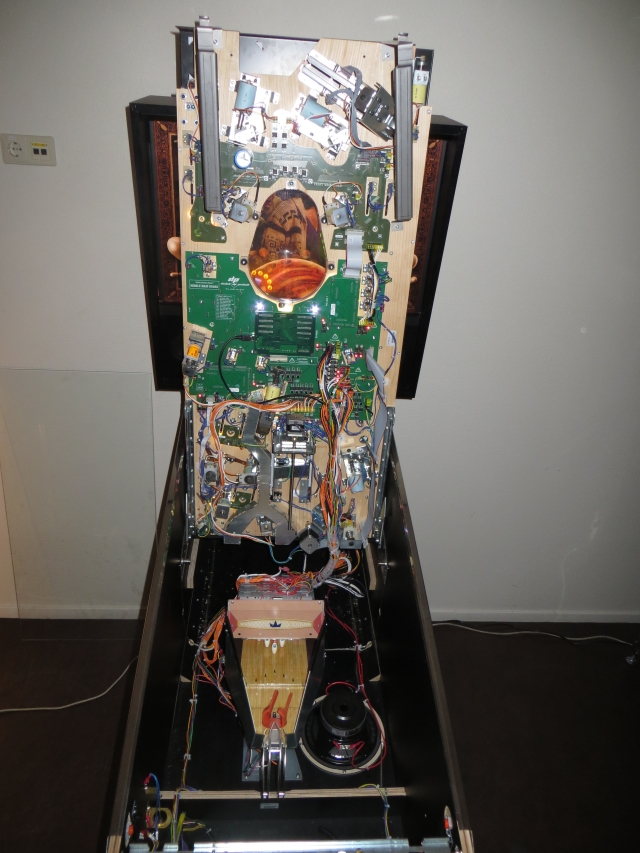 Underside of the complete game

Having attended several factory tours in several pinball factories over the years my personal feeling is that the ARA facility is quite something else. Not only do they seem to do a lot more of research and development in regards to the game, but they also do a lot of other things in-house that you don’t see at other facilities. On top of that this is probably one of the cleanest factories I’ve ever attended. As ARA is into medical devices as well they probably have to be, but still. As a company they take pride in what they do and they are definitely aiming at the best quality possible. So in that regard future owners of a Big Lebowski game are in for a treat in the sense that the final production version of the game is likely to be a game of the highest quality. Add to that the passion and enthusiasm of the Dutch Pinball team, which must be resulting in an outstanding game. Had there been some doubts in regards to the progress of the game, the use of elements from the movie and other issues, this factory tour indicates that – although the game may take a bit longer to manufacture than some had hoped – once you’ll get it chances are you’ll be very happy with it. So with all the licensing obstacles out of the way, and the factory ready to go, the last element to take care of is the game code. This is obviously a known difficulty in pinball the past few years, but – again – I’m very confident that will work out great as well.

Martin ayub of Pinball News also wrote a great report on this factory tour with even more details.

For more info on the game visit: www.thebiglebowskipinball.com.