It’s Pinball Expo week and as editor of Pinball Magazine I headed for Chicago on Monday. Just like previous editions I will be reporting from the show on a daily basis about what I have been up to. This content will only be published on the Pinball magazine website, not in the printed magazine. Pinball Expo doesn’t start until Wednesday evening, but there was a good reason to fly in early: I made some arrangements to visit several pinball designers in their workshops prior to the show and host the almost traditional Pinball Magazine Pre Expo Party.

After a good night of sleep Martin Ayub of Pinball News and I headed north to visit Dennis Nordman Tuesday morning. Dennis has been working on a new game with Paul Reno. The game isn’t finished and won’t be shown at Expo, but Martin and I could take a look and flip the current version of the white wood. Everything we saw was off the record, so all I can say is that it’s a very interesting, innovative and fun layout with lots of great shots and possibilities. I’m looking forward to see the game being developed further. 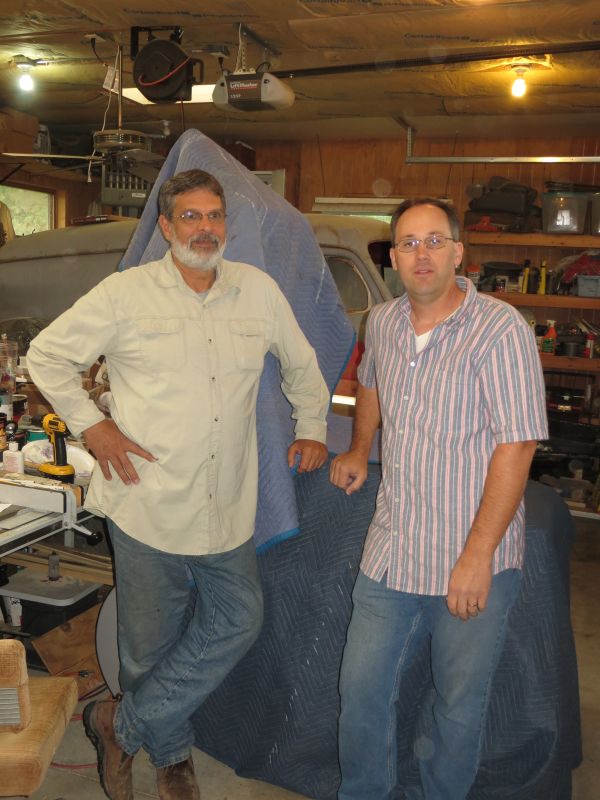 Dennis Nordman and Paul Reno in front of their covered up upcoming game.

Following the visit to the workshop we went out for lunch (Mexican) and then drove back south for our next meeting: the workshop of John Popadiuk (Zidware). All I’m allowed to say about this visit is that John is working on his Magic Girl and Retro Atomic Zombie Adventureland games and they look absolutely great. It is no secret that John has revised the artwork on these games far more than he ever could when working at a company like Williams or Stern and it definitely shows. The games aren’t ready to go into production, but those who ordered one are in for a treat when the games are finished. John was a great host and told many stories related to the history of pinball in Chicago, Like where certain companies used to operate and why most of the pinball companies had a railroad in their backyard. Great stories to hear and I’m glad John is so educated on this subject matter. 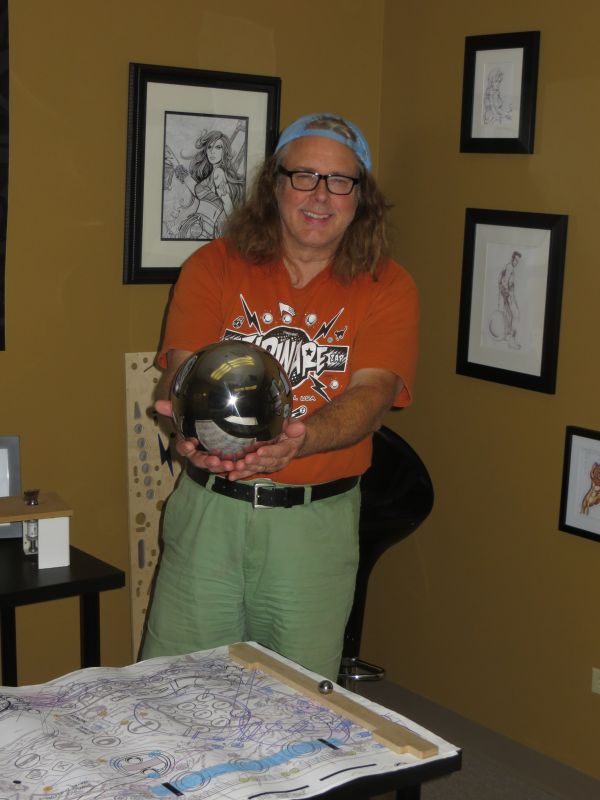 The last and final stop of the day was Gameworks in Schaumberg where I had invited some pinball industry people for a casual dinner. Last year I did a similar dinner with a smaller group. This year the following people attended: Roger Sharpe (pinball historian), Greg Freres (Art director at Stern Pinball), Martin Ayub (Pinball News), Mark Ritchie (former pinball designer), Gary Flower (pinball historian), Jean-Paul de Win (Jersey Jack Pinball / Dutch Pinball), Barry Driesen (Dutch Pinball), James Loflin (Pinball Inc / Circus Maximus), Paul Kiefert (Circus Maximus) and Bryan Hansen (Jersey Jack Pinball). It was great catching up with everybody on what they are working on. Time flies when you’re having fun and before I knew it the first people had to go home. If today was a preview of the upcoming days, then this will be a great week!

Stay tuned for more updates later this week. This Pinball Expo will see a lot of new games being presented, such as The Big Lebowski (Dutch Pinball, 3 games present and playable), The Hobbit (Jersey Jack Pinball, 1 which will be playable), Full Throttle (Heighway Pinball, 1 which will be playable), America’s Most Haunted (Spooky Pinball, playable – apparently Spooky is not bringing Pinball Zombies From Beyond the Grave-), Wrath of Olympus (Riot Pinball, 1 and playable) and it will be the first chance for many to play Stern‘s latest The Walking Dead. At the moment I’m not aware whether Skit-B Pinball will be presenting Predator and/or Experts of Dangerous, but who knows 🙂 Multimorphic will be present with possibly Lexy Lightspeed and/or Cosmic Cart Racing and there will be a ton of interesting seminars. It’s gonna be a great week 😀